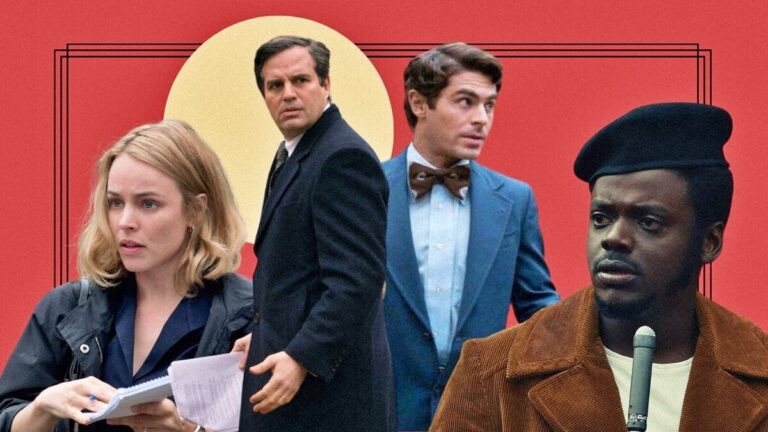 10 Gripping Crime and Courtroom Drama Films Based on Real Life

These biographical films involve notorious criminals, remarkable lawyers, and brave journalists that truly made a mark in our recent history.

Looking for more films with gripping and intriguing plots? If you’ve scoured the most notable fictional films with such thrilling stories, then maybe you should check out the ones that are actually based on real life! Sure, their writers do not have the complete freedom fictional screenwriters have, but these films’ stories wouldn’t be on the big screen (and our home’s screens) if they aren’t interesting enough to be told.

On this list, we’ve rounded up films based on true stories that involve notorious criminals, remarkable lawyers, and brave journalists that truly made a mark in our recent history.

The Trial of the Chicago 7 recreates the infamous trial of seven anti-Vietnam War protesters who have been accused of instigating riots during the 1968 Democratic National Convention. The film has its gripping moments before hitting an inspiring crescendo at the end.

This Academy Award-winning film is about a group of investigative journalists from The Boston Globe who exposed the systematic child abuse by Roman Catholic priests in the area. This feat earned The Globe a Pulitzer Prize for Public Service in 2003.

This film is proof that sometimes the truth is stranger than fiction. Angelina Jolie plays the single mother Christine Collins who in 1928, went home to find her nine-year-old son missing. Months after dealing with the incompetence of the LAPD, the authorities finally announced that the child has been found and arranged a reunion for the mother and son. But instead of her child, Christine is greeted by a kid she doesn’t know.

This film is based on the 2016 New York Times Magazine article ‘The Lawyer Who Became DuPont’s Worst Nightmare’ by Nathaniel Rich. It is about the corporate defense lawyer Robert Billot and his legal battle against the chemical manufacturing corporation DuPont, after a farmer from West Virginia discovered that the deaths of his farm animals are linked to the corporation.

Another movie that’s based on real life, Richard Jewell follows the story of a security guard during the 1996 Summer Olympics. After being hailed as a hero when he reports a backpack that turns out to have a bomb inside, Richard Jewell’s life soon takes a drastic turn when he is wrongfully accused of putting the bomb there himself. With the media fanning the flames, Jewell must prove his innocence from the crime that he had saved people from.

Judas and The Black Messiah

This film details the infiltration of FBI informant William O’Neal into the Illinois Chapter of the Black Panther Party, and how he grew close with its chairman, Fred Hampton, only to betray him in the end. While the film centers on O’Neal and Hampton’s lives, it also depicts how criminal a government arm can be, emphasizing why the Black Panther Party continues to fight to this day.

This biographical film about the notorious serial killer Ted Bundy focuses on the man’s romantic relationships and how he has hidden his thirst for blood from his girlfriend Liz. Through Zac Efron, the film also captured Bundy’s infamous charisma that he used to gain the trust of his victims and try to sway the public’s opinion.

Zodiac is another infamous serial killer who walked the streets of San Francisco in the ’60s and ’70s, and used cryptic messages to taunt the authorities. This film from David Fincher follows San Francisco Chronicle’s political cartoonist Robert Graysmith, who tries to piece together the clues from Zodiac’s letters to uncover the murderer’s identity.

The Post tells the story of The Washington Post’s first female publisher Katharine Graham and her editor-in-chief, Ben Bradlee, as they risk their careers and freedom to expose a decade-long government cover-up that’s linked to the Vietnam War.

Starring Michael B. Jordan and Jamie Foxx
Watch it on HBO Go

Just Mercy is about the young lawyer Bryan Stevenson who goes to Alabama to defend those who were wrongly condemned or not afforded with proper legal representation. He then meets Walter McMillian, a prisoner sentenced to die for the murder of an 18-year-old girl despite evidence that proves his innocence. Stevenson would then fight for McMillan’s life while facing racism and other underhanded tactics from his foes.

Judas and the Black Messiah