Silverlens is pleased to present A Spectacle of Coming Together by Bernardo Pacquing. The artist's latest solo show marks his seventh in the gallery. Using numerous mediums ranging from paint to wood, Pacquing's paintings and assemblages continue to defy common notions of abstraction. 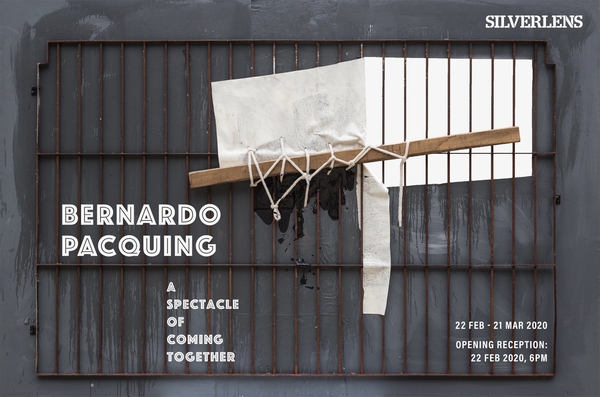 For this presentation, Pacquing continues to extract pictorial elements from found objects by reinscribing it with motifs of space, color, and line through forms that displace past assumptions and host new meanings. He takes fragments once part of a forgotten whole – broken rulers, rusted screws, sea detritus, reclaimed wood – causing them to withdraw from their homogenous use by highlighting their fundamental qualities.

Pacquing's language of abstraction is a gradual process of complicated gestures set on building and grafting. In this new series of paintings and assemblages, he takes visual cues from aged wood from ruined houses buried under volcanic soil. Each canvas begins with an underpainting, a classic Renaissance technique used to advise the tone and color of a painting. His practice is unusual in the way he uses black as a structural base before slowly multiplying layers to as many as eighteen or more with each coating different from the next. Oil paint is mixed with materials typically used in the construction industry like tile adhesive, which shows as translucent yellow on the canvas. The expressive lines, blocks of color, thickened clumps, and drip markings show impressions of what could be a step ladder or a pile of bricks. The abstraction strips the block shapes of context and meaning until what remains are the detailed surface textures of the canvas. The viewer is then confronted by a large scale object where its own connected physical characteristics are its own – vital and independent.

On assemblages, Pacquing takes risks by seemingly grafting one object on to another in the act of contaminating material codes. In one work, a block of darkened wood is inserted by strips of packing carton with the paper cells exposed sideways. Another is of a cindered block with a black trail of hardened resin pooling at its bottom. On canvas, the act of grafting becomes a form of binding with a large work made from discarded camping gear compressed between two pieces of wood and hoisted by ripcord. It is dominated by messy swathes of gray, emulsified black and beige color. Another work is made of bent wood slab painted black and white with its center grounded by a weathered furniture leg tied by thick rope with its ends let loose. This is a consistent theme found in Pacquing's oeuvre, where he uses sculptural forms to reinforce ideas of simplified geometry.

For a sculpture park in Pampanga, its genesis grew from the same excavated century-old wood used for the series above. The material is removed from being the ruined structure of a house into a cluster of domes as if in a village or a community. The large-scale installation becomes a site of art-making and play for both kids and grownups. They are differently made and layered like his canvases. Domes hark back to pre-history when it was used to provide shelter to the first civilizations. At its most essential, they are half-spheres adopting shapes like triangles for structural strength.

It is these schematized shapes found in Pacquing's work that allow the experience of it to exist in shifting space, varying contexts. It can be many things to many people with its meaning refusing to remain static long after it is articulated.

A Spectacle of Coming Together is on view from 22 February to 21 March 2020 at Silverlens, 2263 Don Chino Roces Avenue Extension, Makati City. For inquiries, contact info@silverlensgalleries.com or +632-8816-0044.