(Cancelled) as of March 27, 2020: The community’s health and safety is and will always be our top priority. With audio and video engineers coming from the USA, 100+ orchestra members and crew, and over 3,000 audience, we have been left with the only option of postponing Star Wars: A New Hope in Concert to a later and hopefully safer date.

As the COVID-19 crisis continues to evolve every day and as most countries, including the Philippines, are taking extreme measures to save lives, it is with a heavy heart that we must announce the postponement of Star Wars: A New Hope in Concert, originally scheduled to take place on May 30-31, 2020. Tickets bought prior to postponement will be valid for the new show dates, August 15-16, 2020. You may check our social media (@cc.concepts.ph) accounts for further ticketing information.

CC:Concepts will present the Star Wars: A New Hope In Concert featuring screenings of the complete film with Oscar®-winning composer John Williams’ musical score performed live to the film. The concert will be led by acclaimed conductor Gerard Salonga. 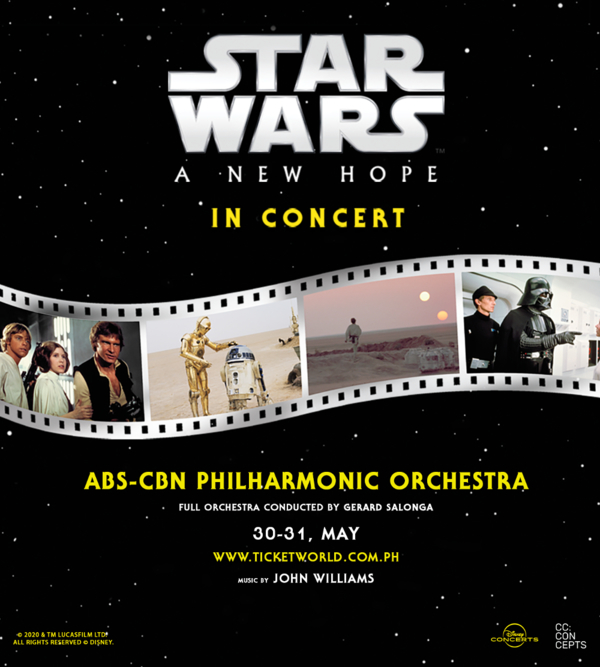 Since the release of the first Star Wars movie over 40 years ago, the Star Wars saga has had a seismic impact on both cinema and culture, inspiring audiences around the world with its mythic storytelling, captivating characters, groundbreaking special effects and iconic musical scores composed by Williams.

Fans will be able to experience the scope and grandeur of this beloved film in a live symphonic concert experience, when the Star Wars: A New Hope debuts on May 30-31, 2020.

Williams has won five Academy Awards, four Golden Globe Awards, seven British Academy Film Awards, five Emmy Awards and 25 Grammy Awards. With 52 Academy Award nominations, Williams is the Academy’s most nominated living person and the second most-nominated individual in history, after Walt Disney.  In 2005, the American Film Institute selected Williams' score to 1977's Star Wars: A New Hope as the greatest American film score of all time. The soundtrack to A New Hope also was preserved by the Library of Congress in the National Recording Registry, for being "culturally, historically, or aesthetically significant."  Williams was inducted into the Hollywood Bowl's Hall of Fame in 2000, and he received the Kennedy Center Honors in 2004, the National Medal of Arts in 2009, and the AFI Life Achievement Award in 2016.  Williams has composed the scores for eight of the top 20 highest-grossing films at the U.S. box office (adjusted for inflation).

The Star Wars: Film Concert Series is produced under license by Disney Concerts in association with 20 th Century Fox and Warner/Chappell Music.

Star Wars and related properties are trademarks and/or copyrights, in the United States and other countries, of Lucasfilm Ltd.and/or affiliates. © & TM