García Montero is a poet himself who has won several awards for his works (El jardín extranjero, Habitaciones separadas, La intimidad de la serpiente). He is also a Literature professor who has produced scholarly research and works on Miguel Hernández.

The exhibition, inaugurated last 25 July at the Exhibit Room of Instituto Cervantes, was organized by the Diputación de Jaén (Provincial Government of Jaén) in commemoration of the 75th anniversary of the poet’s death. In 2018, the exhibit began its international tour, visiting London, Manchester, New York, Chicago and Dublin. After Manila, the exhibit will be heading to Toulouse and Paris. Being the only Asian city in the international tour of the exhibit, Manila had already been marked as an obligatory destination since the library of Instituto Cervantes Manila is named after the famous Spanish writer. 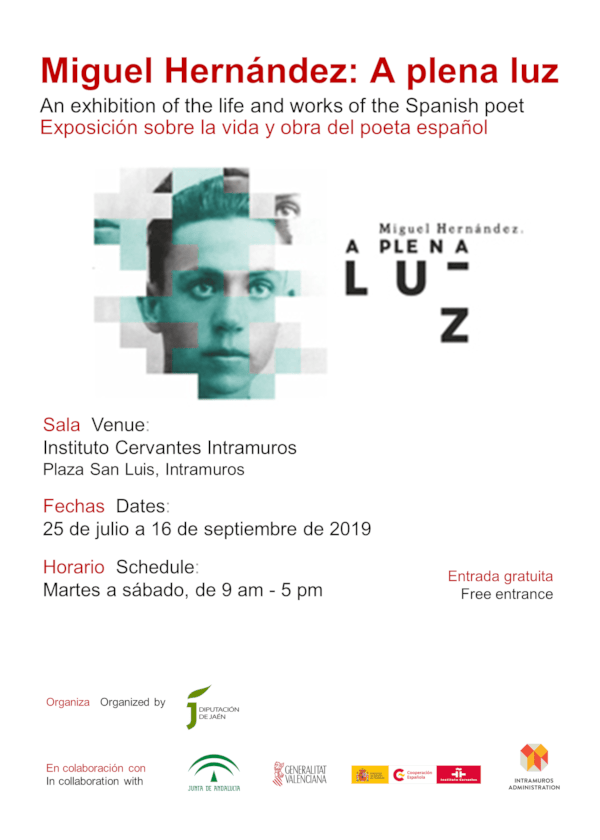 Born in 1910 in the town of Orihuela in Alicante, Spain, Miguel Hernández was a self-taught poet highly influenced by the classics of the Spanish Golden Age. His book El rayo que no cesa (1936) made him famous in the poetry circles of Madrid, where he had moved to try his luck as a poet. In the capital of Spain he became a friend of Pablo Neruda and had contacts with some members of the literary movement "Generation of 1927", like García Lorca and Vicente Aleixandre. The Civil War did not disrupt his literary career and in fact, during this time, he published Viento del pueblo (1937) and El hombre acecha (1938). After the war, he was arrested and put in jail, where he died in 1942.

Centering on Hernández as an icon of poetry, the exhibit, curated by poet and literary critic Juan José Téllez, offers a glimpse of his life through photographs and digital copies of his works and various documents. The collection also contains original pieces, such as book editions, and facsimiles of manuscripts and letters from the legacy of Miguel Hernández --acquired by the Diputación de Jaén through the writer’s heirs. 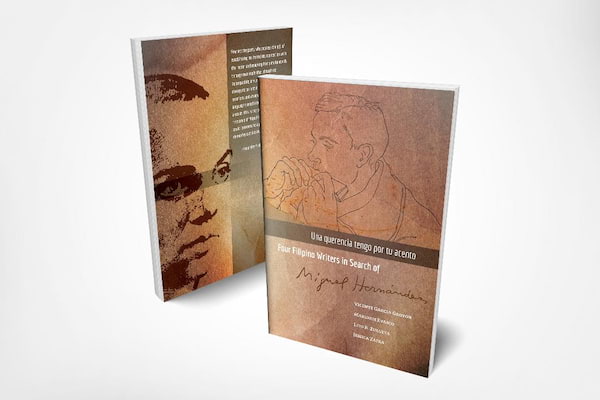 In this publication, the four Filipino writers recount their experiences in various places in Spain relevant to the prominent Spanish poet. Novelist Vicente Garcia Groyon composes a portrait of Miguel Hernández and highlights the significance of his work, through interviews and visits to the key places in the poet’s life. Marjorie Evasco, on the other hand, recalls aspects of the peculiar and intense journey in translating the poetry of Miguel Hernández into English. For his part, journalist and writer Lito Zulueta talks about Hernández’s works from a different angle, attempting to connect classical literary tradition which had inspired the poet, to the turbulent period in which he lived, and linking the events of that era to contemporary historical events of the Philippines. Lastly, Jessica Zafra’s essay dwells on the danger of oblivion and underlines the importance of preserving “places of memory”, enriching the panoply of Hernandian places by incorporating the city of Jaen, where the poet’s legacy is safeguarded, as well as Quesada, where his wife Josefina Manresa was born. Complementing the essays of the four Filipino writers are contributions from two Spanish authors, Guillermo Carnero and Jesucristo Riquelme.

This book is an initiative of Instituto Cervantes and is published by the De La Salle Publishing House, in collaboration with the Embassy of Spain in the Philippines, the Spanish Agency for International Development Cooperation (AECID), Fundación Miguel Hernández, Diputación de Jaén, Fundación Legado Miguel Hernández and Turespaña, with the support of Rotary Club Orihuela and Turkish Airlines.