They Might Be Giants - A Solo Exhibition by Jonathan Ching

SILVERLENS is pleased to present They Might Be Giants, an exhibition of six new large-scale paintings by Jonathan Ching. 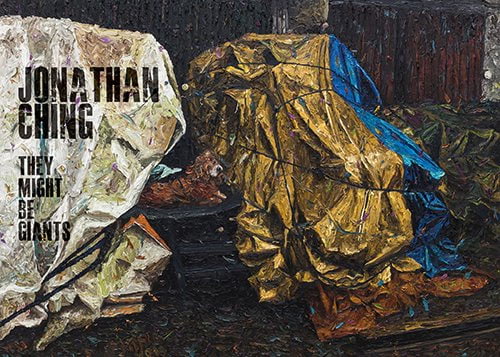 His third exhibition with the gallery, the elements seen in the streets of Manila where Ching grew up are the starting point of this suite of paintings, with the eponymous piece They Might Be Giants as one of the largest works the artist has made to date. Previous exhibitions in Silverlens are Sputnik Dreams (2013) and elsewhere (2015).

"Ching, whose works provoke and evoke a myriad of sentiments, unveils a collection that elevates the messy and blighted street scenes into larger-than-life art pieces. His massive works breathe life to urban myths and legends. Done in his distinctive panel works, this time in almost life-size dimensions, his master strokes capture Manila street scenes after dark or before dusk with all of its hurried and lurid details easing into throbs with diatribes to reinforce the theory that one’s junk is another man’s treasure.

They Might Be Giants is a tetraptych, a four-paneled work measuring 8 feet x 12 feet that shows three auto part surplus wrapped in tarpaulin.  “It was a random shot that I took during a bike ride around my neighborhood some years back. I didn’t know what to do with it,” says Ching. The image is like a Schoenberg piece, piercing in its cacophony, yet leaving  one bothered, by the lines, the blurs, the dark and stark tones, the confusion and the melding and clashing of hues and shades, that what palpably is the only missing sensation is smell. Yet, even this one can create in one’s ethos.

Not My Father’s Moustache is not a paean to a famous watering hole but a piece that shows a heap of garish whatnots topped with a blue and while discarded tarpaulin. The whimsy comes in details with people walking pass it. The creases and the play of shadow, lend a deep mystery to what lies beneath the heap.

One piece, titled Living in Between Spaces, is an allegory to the way society treats its own, whether foe or man’s best friend, stuck between two structures covered by tarpaulins. The contrast of cared for and discarded hits as the white covered shape asserts its value versus the  brown- blue pile, when both are covered in grime and sending off thoughts, grim and grumbling. The harsher commentary is that dog wedged between rubbish and redemption, as many lives are indeed.

But why Ching’s fixation with tarpaulin? He muses if the rural scene is Amorsolo’s fertile ground, he finds tarpaulins akin to it, and in the concrete jungle where he spends much of his life, objects covered, shrouded, hidden or simply safe-kept from the elements by tarpaulin offer a visage of mystery, mystic, and mistakes that can heal as much as bring hell whatever one’s viewpoint is.

Other works featured in the exhibit are A Certain Something, The King and The Pawn and Silent Shrouds."