Artinformal is pleased to present Recent Works by Oca Villiamiel opening at our Greenhills gallery on 2019 Jun 22, Saturday. 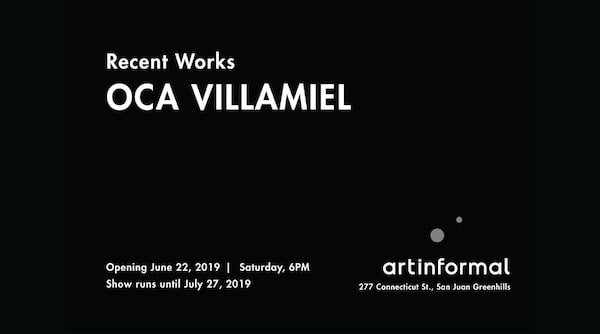 Oca Villamiel conjures a series of works reflecting on the tenuous balance between the natural world and the perils of taking hold over its rhythms.

The exhibit reflects discrete ecologies: cubical constructions, hinting at the strata of excavated plots; collections of transient detritus, preserved as enclosed containers and video clips. Such works take time to complete, with the seasons. One needs to take a closer look at how each is built from patiently collecting and putting together the most fragile of things:  the lightest of feathers, harvested daily; pages of books, salvaged from floods; the preserved remains of thousands of bees, gathered as memento mori after being exterminated en masse.

Through tracing things interconnected across nature, Villamiel attempts to coax from the viewer a sensitivity to the world beyond. By salvaging quiet stories of passings, Villamiel transforms material traces of loss into things that live to face a brand new day.

Oca Villamiel is known for his installations and assemblages that reflect his stance on various issues, be it spiritual or political. He is not just an artist but an avid collector of objects seemingly forgotten or abandoned, most of which become the materials of his works, such as the discarded dolls, flood soaked books, and bullhorns as seen in his previous shows. His works are continuously impressive in their sheer magnitude as well as in the breadth and scope of thinking that goes into their making.

Villamiel had his first solo exhibition in 2009 after nearly two decades of work as a set designer and entrepreneur. In 2013, he represented the Philippines in the Singapore Biennale.