Spanish contemporary artist Cristina Gamón arrives in Manila for a residency and exhibition commissioned by the modern and contemporary art hub Galerie Stephanie at the Shangri-La East Wing in Mandaluyong this April. She creates distinctive pieces for Acquatopia, her first solo exhibition in Asia. The title is a conscious archaism of ‘water’ in Latin and its European scions, alluding to the fantasy and romanticism proposed by the wholeness of Gamón’s contemporary works presented at Galerie Stephanie. 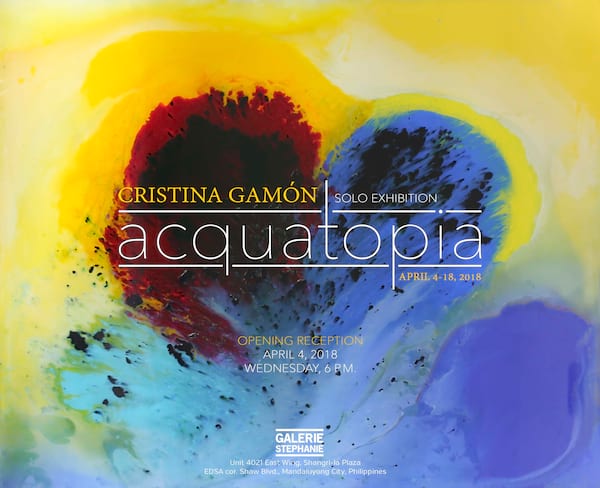 A painting by Gamón involves colors spread and splattered unto several layers of acrylic surfaces, intuitively punctuated by cut spaces, giving us glimpses of the more solid (yet still veiled) foundations of the composition. The translucence and fragility of the acrylic sheets coated by tempered amounts of acrylic paint can evoke many visual trajectories: the images may allude to familiar painterly vicinities of mountains, archipelagos, or fields seen from a bird’s point of view, while some figurations may instantly induce ruminations of wide seascapes or mirages through river troughs. We may also regard the works as microscopic documentations of made-up environments. Much like specimen slides under a mechanical lens, the acrylic sheets become delicate containers of floral and faunal cells under examination, bursting with life. The abstraction encourages the viewer to select parts and sections from the works’ graphic properties to create a particular narrative or contextualization. The images are nonetheless rooted from the artist’s idiolect of transubstantiating intimate thoughts and ideas into relatively large and wide physical formats, perhaps like scribbles of texts from the artist’s diary projected for panoramic reading. 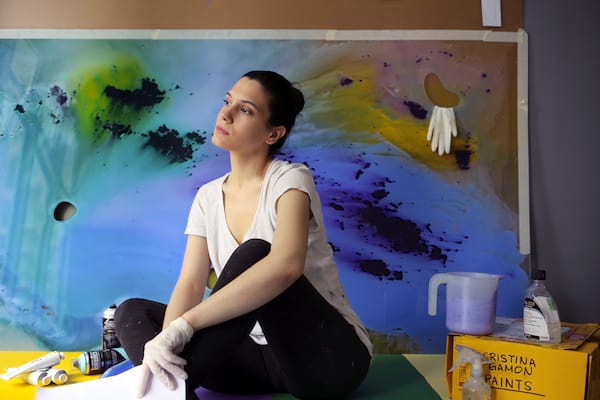 The plural possibilities of meaning from Gamón’s collection are tempered however by the dictation beyond the framed worlds installed at Acquatopia. During her residency in Manila, she dutifully devotes time and thought in organizing the microcosm of each artwork as part of an indispensable cast inside the gallery, if we were to look atAcquatopia as one whole ecology. As a co-designer of the space, the artist proactively generates a prescribed walk-through of the works by being definite with their places on the walls, among other layers of materials: delegated wall palettes; enlarged photographs of Arctic and Palawan outdoor textures printed on vinyl as complementary background to some framed works; and video installations of sea and ice. By way of abstraction, the localities are understood as elsewheres. The places can be grasped, but they are still bound by the specter of anonymity. As materializations of emulsified aims, the works at Acquatopia can nonetheless be treaded as a linear sequence of emotions or events. This demonstrates Gamón’s scholastic comprehension of abstraction as a style, a technique, and a worldview affected by conceptual and currentingestion of histories of art. Part-homage and part-critique, Gamón utilizes the Academic standards of aspect ratios of paintings to contain her fluid scenes. Her play of these dimensions is apparent in her casual nomination of object titles, which adds more depth in our consumption of images and forms: Is the piece titled Landscape a landscape? If the objects were presented under warm light, can they procure a new set of imagery and imagination?

Cristina Gamón (b.1987 Valencia, Spain) lives and works in Madrid. She has participated in solo and group shows in Spain, France, United States, and England. Some of her works are included in collections of several universities, public institutions, and estates in Spain and France. She was invited to participate in group shows for international fairs such as the recently concluded Art Fair Philippines through Galerie Stephanie, Context New York in 2017 and 2018, Context Miami, ArtMarbella International Art Fair in Málaga, and Estampa International Art Fair in Madrid, all three latter in 2016. She garnered numerous recognitions for her professional art practice, to quote some: the National Painting Prize Queen Sofía in 2016, Resident Artist Member at Casa Velázquez Académie de France à Madrid 2012-14, and Gold Medal in the National Painting Award BMW in 2011 which was awarded by the hand of the Queen Doña Sofía.