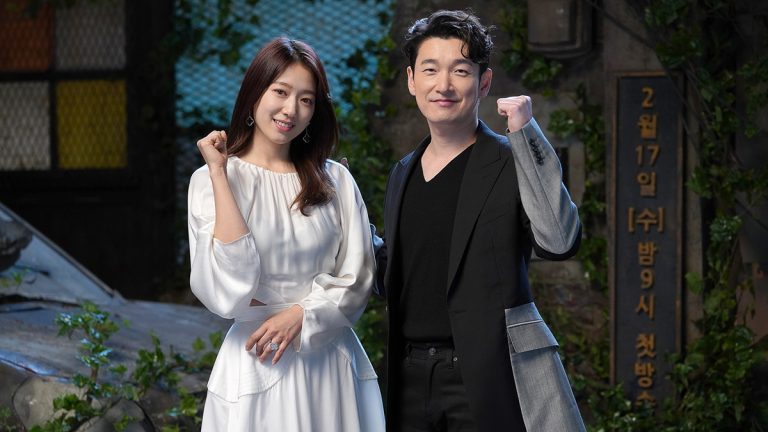 Sisyphus, one of the most highly anticipated dramas of 2021, is finally here! Incorporating fantasy and mystery elements, the story centers on genius engineer Han Tae-sul (Cho Seung-woo) uncovering dangerous secrets and Gang Seo-hae (Park Shin-hye) who comes from the future to save him. Check out some major reasons why you need to watch Sisyphus below.

Main leads Cho Seung-woo and Park Shin-hye are famous for having many successful shows and movies under their belts. Being highly sought after, their casting was much talked about and eagerly awaited. Director Jin Hyuk shared, “While discussing the casting with the writers, we decided that if we couldn’t get either Cho Seung-woo or Park Shin-hye, we would just work on a different drama.” Thankfully, casting worked out perfectly and there are many other actors to look forward to including Sung Dong-il, Tae In-ho, Chae Jong-hyeop, and more.

Director Jin Hyuk is known for having worked on many popular titles including The Legend of the Blue Sea, Doctor Stranger, and The Master’s Sun. Just as the director was excited about working with Cho Seung-woo and Park Shin-hye, the feeling was very mutual. Park Shin-hye said, “I’ve always been curious about and wanted to work with director Jin Hyuk. I actually met him when I was younger and I’m so happy to have been able to work with him this time.” Cho Seung-woo further complimented Jin Hyuk and divulged, “The director is very considerate of actors. He will consider any ideas that actors propose.”

Sisyphus shows a world where the present and the future coexist. The future Korea is in ruins in 2035. Viewers can see the difference between the present that Han Tae-sul lives in and the devastating future that Gang Seo-hae comes from. In their midst, there are individuals who hide their identities and have ulterior motives. The director and writing duo Lee Jane and Jeon Chan-ho actually began planning for Sisyphus 4 years ago. With much research and imagination blended into a tight plot, Sisyphus will be unlike any drama you have watched thus far.

Park Shin-hye’s character Gang Seo-hae is a bold survivor who is able to adapt quickly and think on her feet. She risks her life to save Han Tae-sul from danger as they try to save the world. You’ll be able to see a lot of satisfying action scenes featuring Park Shin-hye as she fights off their opponents. The actress started working with the action team about a month and a half before filming started and actually filmed for two more months than Cho Seung-woo. Furthermore, Cho Seung-woo complimented Park Shin-hye’s powerful kicks and punches describing her as “incredible.”

Having to simultaneously portray a present Korea and a future Korea that resembles a wasteland, a lot of fine details can be found in the sets featuring the future Korea. Director Jin Hyuk explained, “We show the future, but the future isn’t glamorous. We put in a lot of effort to make the future look realistic and consulted many different experts and researched a lot of different things.” Park Shin-hye further shared, “A set that resembles Myeongdong was created, and it felt so realistic and like I was walking through the real Myeongdong. Viewers will be able to recognize some familiar shops in Myeongdong.”

Previously, a teaser featuring Park Shin-hye’s character coming across a BTS poster and listening to BTS’s “Spring Day” gained a lot of buzz. The director explained, “Seo-hae lives in a future that is in ruins with people killing each other and struggling to survive. So I thought about what would be a source of comfort for her, and I thought that music would be a good fit.” He also shared that “Spring Day” is his personal favorite and there will be more instances where you can see BTS items since Seo-hae is a fan. In addition to BTS related Easter eggs, there is the mystery behind the villain named Sigma. The actor’s identity has been kept under wraps, so you’ll have to tune in to find out who the actor is.

There are so many more reasons to look forward to Sisyphus and its action and mystery-packed story. Watch Sisyphus when it premieres tonight on February 17 at 9:30PM Philippine Standard Time with new episodes every Wednesday and Thursday available an hour and thirty minutes after the Korean broadcast, only on Netflix!