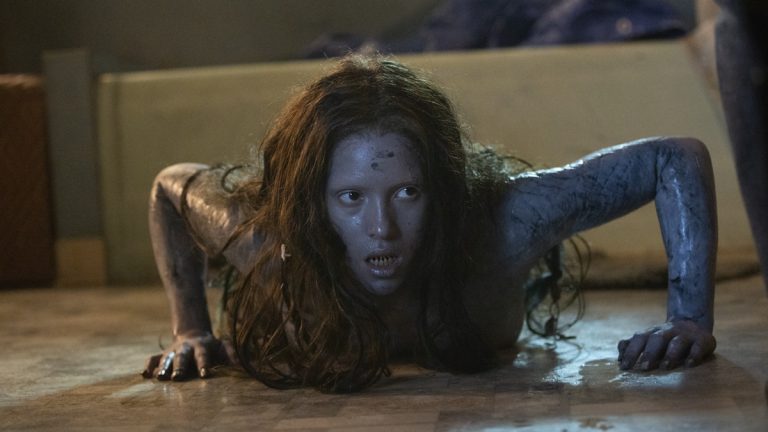 Dubbed as “an absolute must-watch for horror fans” by Forbes, the engaging and provocative eight-part series explores the monsters within and among us.

Each episode features a different present-day American city, with a new protagonist grappling with monsters — some that present as Gothic beasts, others more closely resembling a version of themselves, or the darkness within them. Grounded in reality, it explores the dark, unique, and at times starkly conflicting realities that can exist inside one person.

Please find the episodic synopsis of Monsterland below:

Young single mother Toni (Kaitlyn Dever) lives a very stressful life and struggles with no money and a child with behavioural issues. Alex (Jonathan Tucker), a mysterious stranger, comes into town and offers her money to stay overnight at her house. Will the extra cash outweigh the possible danger Alex poses?

A young George is briefly separated from his mother and stepfather while getting ice cream at Mardi Gras. His mother, Annie (Nicole Beharie), later finds a terrified George wandering in a crowd and he tells her that he was being chased by a monster. Years later, she begins to think she should have believed her son years ago after she starts seeing the monster herself.

An immigrant fisherman, Sharko (Trieu Tran), who was disfigured after a chemical accident, discovers a mermaid and decides to temporarily keep it in his bathtub. Sharko finds himself beginning to develop feelings for the mermaid, and is forced to defend it against fishermen who see her as a way to make some money to feed their families.

The episode explores themes of depression, suicide and love, and how a relationship crumbles under the weight of mental illness. Kate (Taylor Schilling) struggles with suicidal thoughts and her wife Shawn (Roberta Colindrez) can’t bear to let go of Kate.

High schooler Nick (Charlie Tahan) drops out of school to take care of his ailing mother. After seeing a mysterious shadow creature, he joins a group of online members who presume their bad luck is connected to the shadow monsters. As he becomes more involved with the group, Nick must decide how far he is willing to go in their war against the shadow creatures.

As a teenager, Lauren (Kelly Marie Tran) loses her friend Elena (Sarah Catherine Hook), in the White Woods. Ten years later, Lauren has taken on Elena’s life and is going to marry the boy Elena was in love with. But the dark truth about what happened to Elena starts to come out, tearing Lauren’s life apart.

A wealthy CEO, Stanley Price (Bill Camp), is set to go on trial for his misdeeds in the face of an ecological disaster caused by his company. To generate positive news, he attempts to arrange a photo opportunity at a church, but finds himself with a supernatural case of indigestion after eating a communion wafer, forcing both him and his assistant to grapple with their culpability.

Brian (Mike Colter) and Amy (Adepero Oduye) desperately try to cope with the abduction and disappearance of their daughter Tabitha. It seems impossible for either of them to move on, until Brian finds a mysterious being fallen from the sky and left in a dumpster. The couple tend to the creature and get a rare gift in return.