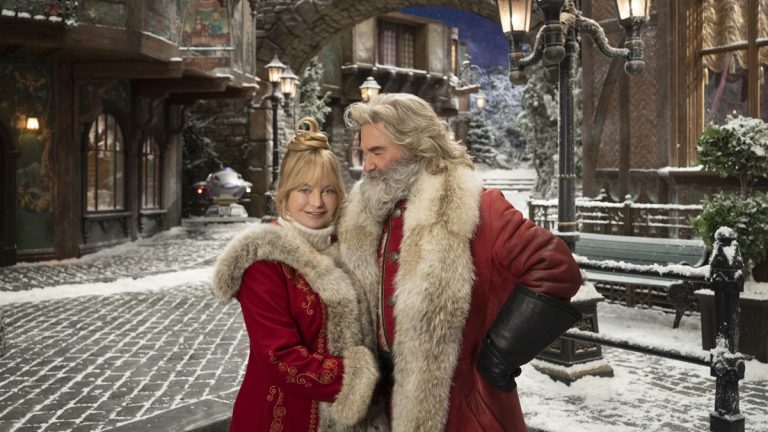 Mrs. Claus is joining Santa on an adventure in the sequel!

Set two years after Kate and Teddy Pierce saved Christmas with Santa, Kate is now a teenager, spending Christmas in Cancun with her brother, her mom, her mom’s new boyfriend, and his son. Not wanting to accept this new version of a family, she runs away, only to encounter Belsnickel, a magical troublemaker who wants to destroy the North Pole and end Christmas for good. Kate and Jack then find themselves on a new adventure with Santa and Mrs. Claus as a way to save Christmas.

Kurt Russell reprises his role of Santa Claus in the film, as well as Darby Camp and Judah Lewis, who play Kate and Teddy. Joining the cast this time around are Goldie Hawn, Julian Dennison, Jahzir Bruno, and Tyrese Gibson.

The film comes from the Home Alone and Harry Potter director Chris Columbus, who also put on his producer and writer hats for the sequel.

Just in time for the upcoming launch of the film this Wednesday, we got to (virtually) sit down with Kurt Russell, Goldie Hawn, and director Chris Columbus for a roundtable interview. Here, they talk about Christmas in the time of COVID, playing Santa Claus, and working with each other for the sequel.

Check out the highlights of the interview here:

Kurt Russell and his portrayal of Santa Claus

Kurt Russell is back at playing the bearded old man in this sequel! When asked about what sets his portrayal of jolly old St. Nicholas for the film, Chris said that the movie shows him as “this rough, rugged mountain man,” which is far from the “fat, jolly Santa Claus” we’ve always seen in movies and photos.

Chris also pointed out that what sets Russell’s Claus from all the others is Russell’s commitment to the character. He shared that Kurt has actually written 200 pages of mythology, spanning his story, and his relationship with Mrs. Claus. Given a chance, he said that he’d like to explore more of Kurt’s mythology — especially after dropping tiny hints of Santa and Mrs. Claus’ past — if a third movie were to push through.

“He said he wants to play this role for the rest of his life. Between Goldie and Kurt, I’ve got their chemistry, and with Kurt Russell, I’ve got this commitment where he thinks this is the role of his career,” Chris added.

While we’ve already seen Goldie as Mrs. Claus at the end of the first movie, it’s only in The Christmas Chronicles: Part 2 that we actually watch her in action. For Kurt, Mrs. Claus was “a big part of Santa’s world; a big part of the North Pole; a big part of the Elves’ lives,” and so it was natural that she gets to share the spotlight with him for the sequel.

About playing the character, Goldie said, “I didn’t want to play anything that was sort of an archaic female character who bakes cookies … I want her to be more present, and they made her an absolutely magical character.”

Chris also mentioned that when playing the character, he wanted Mrs. Claus to be a “strong, tough, formidable woman.” He shared, “I wanted someone who was tough, probably tougher than [Santa] was, and who also had a tremendous amount of magic.”

Goldie and Kurt working with each other after 34 years

Goldie Hawn and Kurt Russell have been together in real life for over four decades now, and they last starred in a film together in the 1987-film Overboard. That’s why it comes to no one’s surprise that their portrayal as Santa and Mrs. Claus will be as natural as it can be. Asked about whether or not there were still challenges in playing alongside each other, Goldie said that “it wasn’t challenging at all” and that it was a “privilege” to be able to do that again in their life.

“We have a couple like Kurt Russell and Goldie [Hawn] who have been together for 40 years. I think they have this tremendous amount of built-in chemistry that they bring to the set, and that’s a director’s dream,” Chris Columbus said.

The most “Christmas-y” thing about The Christmas Chronicles: Part 2

From Santa Claus to the elves in action, everything about the sequel is as Christmas-y as it can get. However, Kurt, Goldie, and Chris all agreed that Santa’s Village and shooting that is the scene that felt most like Christmas to them.

“I wanted you to have to watch that opening shot of Santa’s Village three or four times, because there’s so much going on in it. Elves are Christmas caroling here, they’re delivering letters there. [There’s] so much going on that it was important for me that the audience [think] that it was the most Christmassy shot in the film,” said Chris.

One of the highlights and the most fun scene to watch both in The Christmas Chronicles and its sequel is Santa’s musical numbers. This is why we asked Kurt and Chris what their “dream” performance would be like if a third movie is confirmed.

Kurt only hinted that what he has in mind “might be a little than you’d expect” (“You won’t be wearing an eyepatch!” Goldie teased). Chris, however, spilled on what could be Kurt’s idea, which is a performance with the band ZZ Top.

Chris further explained: “They’re three brothers, and they were popular years ago, with long white beards. They all look exactly alike. They play guitar and it would be funny to see because they look like Santa Claus. So it would always be funny to see Santa Claus playing with those three guys. It just makes me laugh.”

What makes The Christmas Chronicles: Part 2 a film for all ages

While Christmas films are usually for the younger audience, certain themes about The Christmas Chronicles: Part 2 are still relatable for adults. To Kurt, making the film enjoyable for audience of all ages is something like walking on a “fine line.”

Aside from saving Christmas, a theme that’s in the second film is the concept of family. And it’s this kind of layered storytelling, according to Goldie, that makes the film enjoyable for people no matter how old they are. “The older demographic is going to look at that particular conflict or a serious issue, and they’re going to [think], ‘Oh yeah, that’s me.'”

“I don’t need to be an elf to know that running away from home isn’t the answer,” added Kurt, referring to Belsnickel’s (played by Julian Dennison) arc in the film.

On what a good Christmas Film is

With him being the man behind the classic holiday film Home Alone, we also got to ask him his personal favorites when it comes to the genre. Although he admitted he wasn’t “a big fan” of these kinds of films, he mentioned that he absolutely loves “the great ones.” His list includes: It’s a Wonderful Life, Miracle on 37th Street, Elf, A Christmas Story, and more.

Spending Christmas in the time of COVID

With the majority of the people in their homes, something that Goldie and Chris emphasized during the interview is the importance of family. Goldie said that she and Kurt have been spending most of their time with their family, and they’ll also be together for Christmas.

Chris said that he hopes that people would take its message to heart and come together to watch it with their family. With the film premiering in a time of a global pandemic, he also thinks that The Christmas Chronicles: Part 2 can help people “forget about all the madness that’s going on out there.”

“All of us around the world have been watching way more television than we ever did. To get away from the awful news cycle we’re in right now would be great,” he finished.