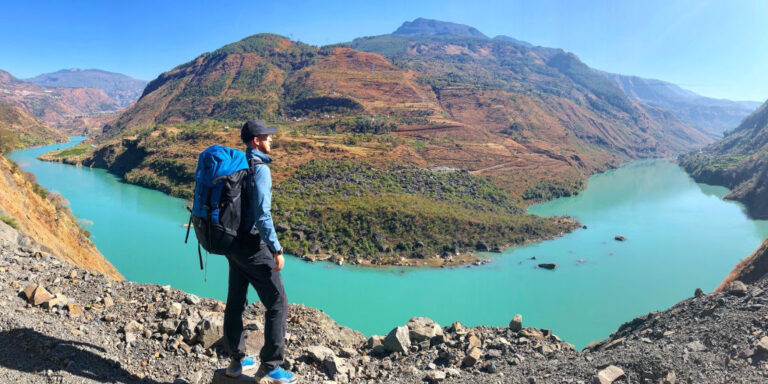 The two-part travel-adventure show 'Walking the Yangtze with Ash Dykes' premieres on October 20 and 27 on National Geographic.

Armed with 36 kilograms of food in his rucksack and a pair of good walking shoes, British explorer Ash Dykes embarks on an ambitious mission: to be the first person ever to walk the entire length of the Yangtze River. Documenting his thrilling and treacherous trials, the two-part travel-adventure show Walking the Yangtze with Ash Dykes premieres on 20 and 27 October at 9pm HKT/SIN (8pm BKK/JKT) on National Geographic.

The documentary is a co-production between Singapore-based production and content distribution company Bomanbridge Media and production company Mandarin Film along with China Intercontinental Press (CICC) in China.

Pushed to the limit in this 6,437 kilometre challenge, the extreme athlete travels an estimated eight million steps from the Yangtze’s source in the melt-waters of the Jianggendiru Glacier high up on the Tibetan Plateau, to its delta where it meets the East China Sea in Shanghai. Undeterred by the river’s sheer length, the perilous terrain, extreme weather, and a multitude of dangers, Dykes pushes on to make a new entry in the Guinness Book of Records.

Along the way, he has hundreds of encounters with local people, wildlife and the river itself. Follow along as Dykes deals with a series of trials, including being stopped by local police, followed by a pack of wolves, and interrupted by a blizzard and landslide. Throughout the action-packed adventure, the wonder and thrill of his game-changing and challenging journey keeps Dykes moving forward.

“I look back on the 352-day expedition and see that walking was the least of it; it was the breathtaking nature, vibrant culture and warmth and openness of the people I met that kept me going despite any setbacks,” said Dykes. “Finishing the journey wasn’t just a personal achievement, it was a momentous statement showing that human limits can stretch beyond what we have conceived possible; that all around the world we can still find, meet, and overcome the greatest challenges and experiences.”Mission Yangtze is Dykes’ third World First record. In 2014, Dykes became the first person recorded to complete a solo and unsupported 78-day expedition across Mongolia. Then, in 2016, he became the first person ever recorded to traverse the length of Madagascar, trekking 2,575km over its eight mountains in 155 days.Some intoxicatingly fearsome, breathtakingly beautiful and soul-stirringly poignant moments from Walking the Yangtze with Ash Dykes include:

The series will air across Southeast Asia in Indonesia, Malaysia, Philippines, Singapore, Thailand and Vietnam.