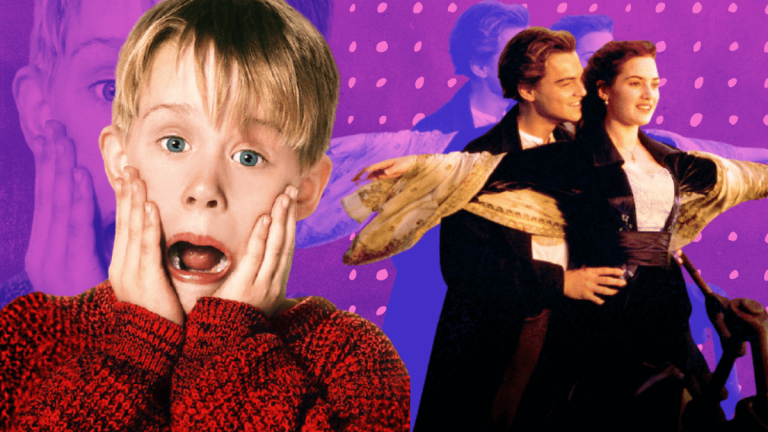 Back to The ’90s: 15 Classic Films You Can Stream on Netflix

Revisit the '90s with this list of films from that amazing era for cinema!

The ’90s is such an iconic decade, and one of the things that made it so are the films that have become part of our popular culture. From the romantic tragedy that is Titanic to the holiday comedy flick, Home Alone, the years 1990 until 1999 are truly rich with cinematic spectacles that cover every genre.

To celebrate this well-loved era for films, we’ve rounded up fifteen movies from the ‘90s that you can now enjoy at home via Netflix.

Rose, who comes from an aristocratic family and is set to marry soon, goes onboard the historical Titanic ship. Here she meets the artist Jack Dawson and romance develops between them, but a tragedy awaits this short-lived love.

Eleven-year-old Vada is a young girl tagged as a freak by other kids because of her boyish nature and because she has a boy best friend.Things get even more complicated when her mortician father decides to remarry.

Truman Burbank seems to have a perfect life, but what he doesn’t know is that he is actually the main star of the world’s biggest and most elaborate reality show. As Truman gets closer and closer to the truth, he must decide if he wants a real life or if he should just play the part.

Jesse, an American returning to the US and Celine, a student on her way back to Paris, meet each other during a train ride. The two unexpectedly form a connection, and they decide to get off in Vienna and wander the city together before Jesse departs the next sunrise.

Eight-year-old Kevin McCallister was mistakenly left at home when the whole family was supposed to go on a trip to Paris. It thrilled Kevin to be home alone, but when two robbers decide to enter the McCallister house, the young boy must use his wits and cunning to stop them.

This film follows the true story of Oskar Schindler. Schindler is a businessman who tried to make a fortune during the Second World War using Jews for cheap labor. But when the Nazis begin executing them, the businessman puts all his efforts and money to save them from certain death.

During World War II, US Army Chief of Staff, Captain Marshall received news that three brothers were killed in the battlefield and their mother would soon hear about the terrible news. When he discovers that another brother is still alive, he sends out a team with the mission of retrieving the soldier.

Matilda is a gifted young girl. Not only is she very smart for her age, she also possesses telekinetic powers. With these talents, Matilda finds ways to defend her classmates from their terror teacher Mrs. Trunchbull, and somehow punish her parents who are neglectful to their children.

Detective William Somerset takes one final case before he retires. For this one, he teams up with the newly transferred David Mills to follow a string of murders with a peculiar pattern. It seems as if the serial killer is murdering people that represent the seven deadly sins. Now the two must race against the clock to solve the case before the death toll reaches seven.

While trying to protect his village from a rampaging boar-demon, the young warrior Ashitaka is inflicted with a deadly curse. Seeking a cure, Ashitaka journeys to the forests of the west where the humans, led by the ambitious Lady Eboshi, are waging war against the gods of the forest and their brave ally, Princess Mononoke.

Tasked to take care of their toy store for a while, teenager Alan buys a set of Commando Elite action figures hoping to make some good sales. But these little toys have been programmed with military technology, and they would stop at nothing to take down their enemies, the gentle Gorgonites, even if this meant destroying their foes’ human allies.

One of the most powerful storms in history approaches, and university professor Dr. Jo Harding prepares the ground-breaking weather alert system made by her estranged husband. When she discovers that the device is being ripped off by a rival, Harding reunites with her husband Bill in a mission to launch the advanced equipment.

Jeff “The Dude” Lebowski’s life as a slacker gets messed up after debt collectors have mistaken him for a different Lebowski– a big time multimillionaire. In order to gain recompense for the trouble, The Dude searches for this other Lebowski, and finds himself hired for a one-time high-paying job. He and his friends must save the millionaire’s wife from her kidnappers.

When the evil scientist Dr. Catheter grabs ahold of the innocent Mogwai Gizmo, he unleashes another batch of the chaotic Gremlins inside a high-tech skyscraper in New York City. Billy and Kate, who are now working at the building, must then find a way to stop the little monsters from wreaking havoc throughout the city.

ALSO READ
Back to The ’80s: 10 Classic Films You Can Stream on Netflix