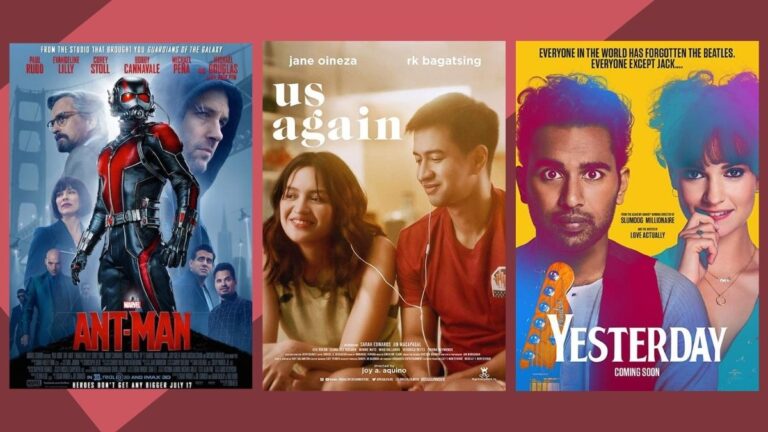 Isn’t it a bummer when you see your favorite movie already playing halfway through when you turn on the TV? Fret not! From rom-com and action to horror and thriller, we’re giving you a heads up on all the must-watch movies on TV from August 24 to 30, 2020.

Star Wars: The Force Awakens
(1:40pm, FOX Movies)
A new order threatens to destroy the New Republic. Finn, Rey and Poe, backed by the Resistance and the Republic, must find a way to stop them and find Luke, the last surviving Jedi.

Barcelona: A Love Untold
(4pm, Cinema One)
While earning a degree in Spain, a young architecture student dealing with grief meets a fellow expatriate trying to escape her past.

The Twilight Saga: New Moon
(7:50pm, HBO)
When Edward realises that Bella’s safety is threatened because of him, he leaves her and moves away. She ends up finding solace in Jacob Black, a werewolf.

A Nightmare on Elm Street (2010)
(10pm, Cinemax)
After Kris and her boyfriend Dean die due to a mysterious dream, Nancy, their friend, who has been having similar dreams realises that the killer finds his victims when they fall asleep.

Captain Marvel
(8:30am, FOX Movies)
Amidst a mission, Vers, a Kree warrior, gets separated from her team and is stranded on Earth. However, her life takes an unusual turn after she teams up with Fury, a S.H.I.E.L.D. agent.

Bumblebee
(1:05pm, HBO)
After the Civil War, Optimus Prime sends Autobot scout B-127 to Earth to form a base where they can regroup. Later, the scout befriends a girl named Charlie, who names him Bumblebee.

The Da Vinci Code
(7:30pm, HBO)
Symbologist Robert Langdon travels from Paris to London to unravel a bizarre murder. Accompanied by a cryptographer, he soon comes across a religious enigma protected by an age-old secret society.

Home Alone
(3:35pm, HBO)
Eight-year-old Kevin is accidentally left behind when his family leaves for France. At first, he is happy to be in charge, but when thieves try to break into his home, he tries to put up a fight.

Exes Baggage
(5pm, Cinema One)
A loner falls for a rebel who fights for what she believes in.

Men in Black II
(3:50pm, FOX Movies)
Agent J learns about a mysterious alien who is searching for the Light of Zartha on Earth. However, he seeks help from his former partner, Agent K, who has retired and had his memories wiped.

The Jungle Book
(7:15pm, HBO)
Mowgli is a boy brought up in the jungle by a pack of wolves. When Shere Khan, a tiger, threatens to kill him, a panther and a bear help him escape his clutches.

Ant Man
(9pm, FOX Movies)
Scott, a master thief, gains the ability to shrink in scale with the help of a futuristic suit. Now he must rise to the occasion of his superhero status and protect his secret from unsavoury elements.

The Book Thief
(3:55pm, HBO)
Liesel lives with her foster parents Hans and Rosa Hubermann in Nazi Germany. She finds solace from the horrors around her by stealing books from the mayor’s house to learn new words.

Captain America: Civil War
(9pm, FOX Movies)
Friction arises between the Avengers when one group supports the government’s decision to implement a law to control their powers while the other opposes it.

Spider-Man
(4:55pm, HBO)
Peter Parker, a shy high school student, is often bullied by his classmates. However, his life changes when he is bitten by a genetically altered spider and gains superpowers.

Yesterday
(9pm, HBO)
Jack, a struggling musician, meets with an accident during a blackout and wakes up to find out that only he remembers The Beatles. Later, he starts singing the band’s songs to gain fame.

Star Wars: The Rise of Skywalker
(9pm, FOX Movies)
When it’s discovered that the evil Emperor Palpatine did not die at the hands of Darth Vader, the rebels must race against the clock to find out his whereabouts.

US Again
(7pm, Cinema One)
Mike is a struggling artist who meets Margie, an unfulfilled medical technician frustrated to become a doctor. Coming from a devastating break up from five years ago, Margie tries to rebuild her life each day as cautious and as indifferent as possible, to avoid getting derailed again and go through another heartbreak.

Dawn of the Planet of the Apes
(9pm, FOX Movies)
Ceasar, a chimpanzee and leader of the evolved apes, allows a human family into his territory. However, due to a vindictive bonobo, misunderstandings arise between the two species, resulting in war.

A Nightmare on Elm Street

Dawn Of The Planet Of The Apes