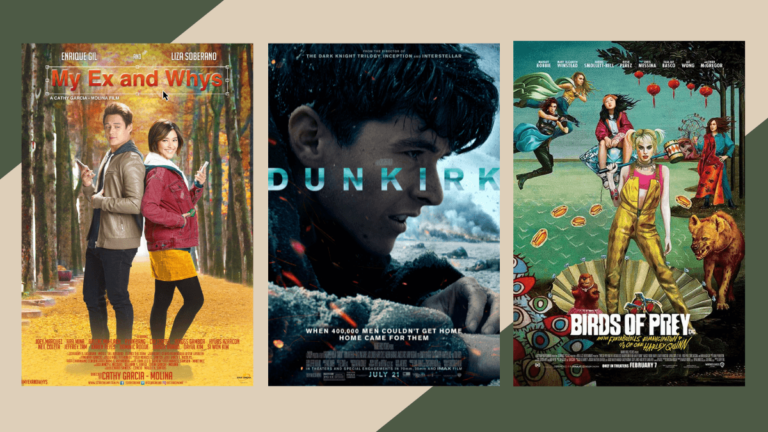 Isn’t it a bummer when you see your favorite movie already playing halfway through when you turn on the TV? Fret not! From rom-com and action to horror and thriller, we’re giving you a heads up on all the must-watch movies on TV from November 29 to December 5, 2021.

Cats
(6:15pm, HBO)
A tribe of cats competes during the annual Jellicle Ball, where one lucky feline will be chosen to ascend to the Heaviside Layer and be granted a new life.

Love Me Tomorrow
(11pm, Cinema One)
A generational love story anchored on the journey of a young man named JC, a conflicted young woman Janine, and Christy, a woman on the verge of a renaissance.

Gravity
(12:15pm, HBO)
Dr. Ryan Stone is a medical engineer on her first shuttle mission. Her commander is veteran astronaut Matt Kowalsky, helming his last flight before retirement. Then, during a routine spacewalk by the pair, disaster strikes: The shuttle is destroyed, leaving Ryan and Matt stranded in deep space with no link to Earth and no hope of rescue. As fear turns to panic, they realize that the only way home may be to venture further into space.

My Ex and Whys
(9pm, Cinema One)
Popular blogger Cali is hired to work on a marketing campaign alongside another viral sensation, who also happens to be her ex-boyfriend. Former playboy Gio is intent on proving he has changed and winning Cali back.

Coach Carter
(4:10pm, Cinemax)
In 1999, Ken Carter returns to his old high school in Richmond, California, to get the basketball team into shape. With tough rules and academic discipline, he succeeds in setting the players on a winning streak. But when their grades start to suffer, Carter locks them out of the gym and shuts down their championship season. When he is criticized by the players and their parents, he sticks to his guns, determined that they excel in class as well as on the court.

The Conjuring: The Devil Made Me Do It
(10:15pm, HBO)
Paranormal investigators Ed and Lorraine Warren take on one of the most sensational cases of their careers after a cop stumbles upon a dazed and bloodied young man walking down the road. Accused of murder, the suspect claims demonic possession as his defense, forcing the Warrens into a supernatural inquiry, unlike anything they’ve ever seen before.

Bloody Crayons
(5pm, Cinema One)
A seemingly tight-knit group of college friends goes to an island to shoot a horror short film. But their world turns upside down when one of them gets killed after playing the Bloody Crayons Game.

The Mummy
(7:55pm, Cinemax)
Stumbling upon an ancient tomb, the hunters unwittingly set loose a 3,000-year-old legacy of terror, which is embodied in the vengeful reincarnation of an Egyptian priest who had been sentenced to an eternity as one of the living dead.

Dunkirk
(9:55pm, HBO)
In May 1940, Germany advanced into France, trapping Allied troops on the beaches of Dunkirk. Under air and ground cover from British and French forces, troops were slowly and methodically evacuated from the beach using every serviceable naval and civilian vessel that could be found. At the end of this heroic mission, 330,000 French, British, Belgian, and Dutch soldiers were safely evacuated.

The Mummy Returns
(10pm, Cinemax)
The evil mummy Imhotep returns to wreak havoc as he resumes his relentless search for power and immortality. To make matters worse, another ancient evil has been unleashed, even more, dangerous than Imhotep. Only the heroic Rick O’Connell and his intrepid Egyptologist wife stand in the way of these twin terrors as they embark upon a desperate mission to save the world.

Baler
(11:30pm, PBO)
A love story of Celso Resurrección, a Spanish Mestizo soldier, and Feliza Reyes, a local maiden and daughter of a Katipunero, with their relationship caught in the middle of the Philippine Revolution.

A Second Chance
(5pm, Cinema One)
After their storybook wedding, Popoy and Basha find married life and starting a business, more challenging than they ever imagined.

Jumanji: Welcome To The Jungle
(7:05pm, HBO)
Four high school kids discover an old video game console and are drawn into the game’s jungle setting, literally becoming the adult avatars they chose. What they discover is that you don’t just play Jumanji – you must survive it. To beat the game and return to the real world, they’ll have to go on the most dangerous adventure of their lives, discover what Alan Parrish left 20 years ago, and change the way they think about themselves – or they’ll be stuck in the game forever.

Robin Hood
(7:40pm, Cinemax)
After returning home to England, aristocrat Robin of Loxley learns that the evil Sheriff of Nottingham has seized his family estate. He soon joins forces with Friar Tuck and Little John — a fierce Arabian warrior who wants to put an end to the Crusades. Armed with arrows and dubbed Robin Hood, Loxley leads a band of oppressed rebels in a daring plan to rob the Sheriff of his money and take away his power.

A Very Special Love
(9:30pm, PBO)
Editorial assistant Laida Magtalas finds herself working for the man of her dreams, Miguel Montenegro, but remains blind to some hard facts.

Fast & Furious 6
(6:50pm, HBO)
Since Dom and Brian’s heist in Rio left them and their crew very rich people, they’ve scattered across the globe; however, they must still live as fugitives, unable to return home to their families. Meanwhile, Agent Hobbs has been tracking a gang of lethally skilled mercenary drivers whose second-in-command is someone Dom knows. Unable to take them down himself, Hobbs asks Dom and his crew for help in exchange for full pardons for everyone.

The Hangover
(7pm, Cinemax)
Two days before his wedding, Doug and three friends drive to Las Vegas for a wild and memorable stag party. In fact, when the three groomsmen wake up the next morning, they can’t remember a thing; nor can they find Doug. With little time to spare, the three hazy pals try to re-trace their steps and find Doug so they can get him back to Los Angeles in time to walk down the aisle.

I Love You, Goodbye
(11pm, Cinema One)
Lizelle Jimenez is a simple woman from a poor family. She then meets a very wealthy, good-looking, and loving man in the person of Dr. Adrian Benitez. They become lovers and start living together as a happy couple.

Never Not Love You
(11:30pm, PBO)
Two young lovers meet and fall in love. Together they build a life until career opportunities bring them out of the country. Out of the comforts of home and with individual careers going in different directions. Will their love survive?

The Amazing Praybeyt Benjamin
(1:15pm, PBO)
After defeating terrorists, Pvt. Benjamin becomes the Philippines’ worldwide sensation, but the attention causes him to neglect his duties and, to remain enlisted, he must become a bodyguard for a misbehaving kid.

Lara Croft Tomb Raider: The Cradle Of Life
(2:35pm, Cinemax)
Fearless explorer Lara Croft tries to locate Pandora’s box before criminals Jonathan Reiss and Chen Lo use it for evil. According to myth, the box holds deadly organisms that could kill millions of people. With her old partner, Terry, Croft goes on a hunt that takes her from Europe to Asia to Africa, where pal Kosa helps her. Along the way, Croft rappels down cliffs, scuba dives, and decimates many male opponents.

Birds Of Prey And The Fantabulous Emancipation Of One Harley Quinn
(5:45pm, HBO)
It’s open season on Harley Quinn when her explosive breakup with the Joker puts a big fat target on her back. Unprotected and on the run, Quinn faces the wrath of narcissistic crime boss Black Mask, his right-hand man, Victor Zsasz, and every other thug in the city. But things soon even out for Harley when she becomes unexpected allies with three deadly women — Huntress, Black Canary, and Renee Montoya.