I Am Not Okay With This, the new teenage drama *slash* superhero series has just landed on the streaming service, and it features friendship, superpowers, Sophia Lillis, family conflicts, and a good-looking yet non-trustworthy jock-- because what YA show doesn’t have that?

Speaking of jocks, we’ve seen them plenty of times giving our awkward protagonists a hard time, be it in books, TV, or films. Most of the time, they are depicted as the bad guys, the bullies, the bad news... but why? This is what we asked the jock of Netflix’s I Am Not Okay With This, Richard Ellis, in a roundtable phone interview.

In the show, Richard plays the role of the “Golden boy” Brad Lewis who is dating Dina, Sydney’s best friend. In case you haven’t watched the series, let me give you a runthrough:

I Am Not Okay With This follows the story of Sydney, a teenage outcast whose problems with her family and high school life is only made lighter by her best friend Dina. But when Dina starts hanging out with the popular school jock Brad Lewis, Sydney soon finds an unexpected friendship with her weird neighbor Stanley Barber. While juggling her dilemmas on friendship, love, family, and school life in general, Sydney must also face the fact that she somehow has superpowers.

So if you haven’t watched the show yet, we highly recommend that you check it out now on Netflix before you proceed to reading.

Jocks as the bad guys.

It was the morning of February 12, Philippine time, when Richard Ellis entertained us Filipino media with a phone interview for I Am Not Okay With This. During this call, Richard shares with us his thoughts on why jocks are always portrayed as the bad guys of high school.

“Unfortunately, I do think that it is part of the high school experience where generally, some of the more popular or athletic people in school--and a lot of it is a product of age as well-- they don’t necessarily have the life experience to have the empathy for people who are a little bit different or misunderstood.” Richard explains.

He also adds that even if the jocks do understand these people, they’re so concerned with getting in that they would rather be mean to someone. “And unfortunately, the jocks in most high schools, they kind of ruled the route, they set the terms of who's cool and who's not so if someone differs from them, it's a lot easier to exclude them. And since they're the voice that everybody kind of looked at, people will listen to that.”

Bringing Brad the “Superjock” to life.

How did Richard bring life to his character in I Am Not Okay With This? The actor did not deny that he grew up with a lot of different "Brads."

“I was quite [aware on] how some of my peers growing up will talk to people that weren't necessarily in their social circles. So it’s kind of taking all of that personal experience from all the people that I've interacted with, and kind of blending it into this one mean superjock.”

But while Brad seems to be a stereotypical jock, Richard also gives credit to what we do not see on the screen. For him, it is their job as the actors of the characters to fill in those blank pages; to find depth in that stereotype even though it is not exactly explained in the show.

“I think behind every stereotype there is a little bit of truth [and it’s like] with this one, he's a jock and he’s popular and he's a little mean to people, but at the same time it's trying to find some of the depth behind that.”

Interestingly, a few shows have exhibited that sort of reason for the behaviour of their bad guys, like Billy in Stranger Things or the complex characters of Justin and Zach in the beginning of 13 Reasons Why. If Richard ever expected some redemption for the character of Brad, the actor answered:

“I wouldn't say that I had any expectations, it was more that I knew I was  in good hands. We're dealing with a set of creatives that have really kind of figured out the template to have a successful show, so I think having them working together, I had a lot of trust in them.”

“Whatever they think is best for the story to continue I am totally at peace with that. So if they want some redemption I would be incredibly grateful for that but it's not. The show is ultimately about Sydney and what's her first story. So I am incredibly happy with whatever they want because they really made my dream come true just letting me be a part of this show. I trust them wholeheartedly.”

Curious what advice Richard would’ve given his character if they ever met in person? While the actor admits that he’d probably avoid the unlikeable character, here’s what we got:

“My advice would be to have some empathy and to listen. I think Brad is a very self-involved character and he really only cares about his perspective, and I would say that a lot of his issues would have been resolved if he would’ve just put himself in somebody else’s shoes.”

Brad Lewis is just one of the few characters that make up Sydney’s complicated life in I Am Not Okay With This-- the coming-of-age drama that deals with the teenagers’ common struggles in school, family, friendship, and even sexuality. If there’s something viewers could learn from this new show, here’s what Richard Ellis has to say:

“Be who you are without caring about the opinions of others. I think it really is a show about being comfortable in your own skin and keeping people around you that make you feel comfortable, accepted, and loved. I think this show will speak volumes to people who really just want to be happy with themselves and accept who they are.”

I Am Not Okay With This is directed by Jonathan Entwistle (The End of the F***ing World) and stars It actors Sophia Lillis and Wyatt Oleff, alongside Sofia Bryant, Kathleen Rose Perkins, Aidan Wotjak-Hissong, and Richard Ellis. It is based on the graphic novel of the same name from Charles Forsman. 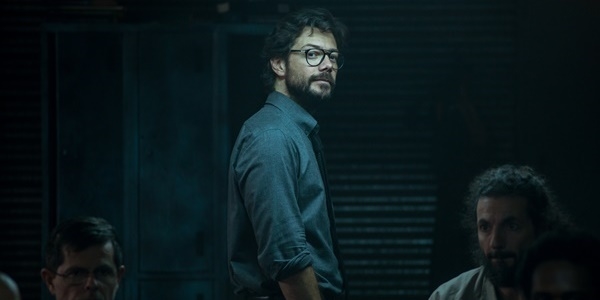