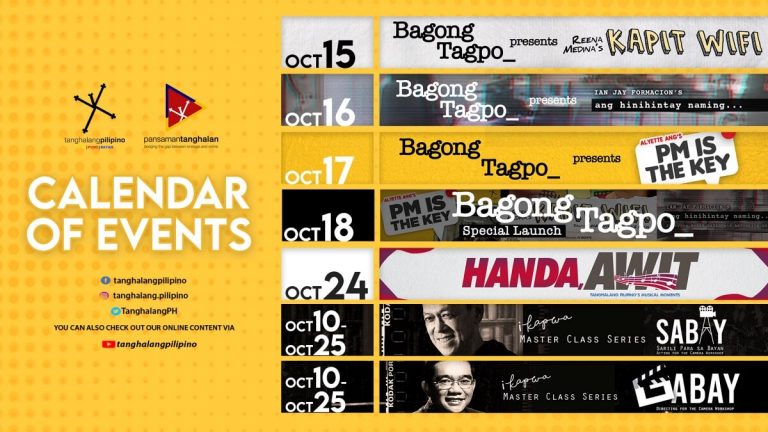 Catch these TP events this October!

An interesting combination of both fresh and highly-respected talents fill this month’s lineup of Tanghalang Pilipino!

TP is very much excited to share these productions and workshops that are geared towards presenting the undeniable talents of Filipino artists, across all generations and mediums.

iKAPWA returns to set the stage for aspiring artists in cultivating their artistry; this time, with masterclasses from two of the industry’s veterans in Philippine theater. TP Artistic Director Fernando Josef will be holding a special class dedicated to improving an actor’s performance in front of the camera in “SArili Para sa BAYan (SABAY-KAPWA)”. Meanwhile, Gawad Buhay awardee and former TP Artistic Director Dennis Marasigan will lend his mastery in directing for the camera in “Gabay sa Bayan at Kapwa (GABAY-KAPWA)”. Both of these workshops will be taught under the Kamalayang Pilipino pedagogy, a theoretical practice applied by TP in teaching arts and culture for its many years in theater production. Classes are every weekend, from October 10 until October 25, 2020.

This month’s “Bagong Tagpo” features some of the plays that have been the product of the recent iKapwa Playwriting workshop. These plays mirror the different realities faced by Filipinos during this pandemic. Apart from featuring the members of the Actors Company in the cast, this month’s Bagong Tagpo also marks the directorial debuts of some members of AC.

“Kapit-WIFI” sees the middle-class household of mother Linda and her daughter Berna looking for means to sustain themselves in the unprecedented effects of quarantine. With the scare of unemployment and health hazards, they are looking for a reprieve with a job opportunity and a little bit of help from their neighbor’s wi-fi connection. Esteemed theater actress Mae Paner stars as Linda, while Actors Company apprentice Eunice Pacia plays her daughter, Berna. “Kapit-WIFI” is written by Reena Medina and is also Actors Company senior member JV Ibesate’s directorial debut. Audiences can connect with these characters when it premieres on October 15.

In “Ang Hinihintay Naming…”, Private School teachers Tala and Griselda are running out of resources as the massive metro lockdown draws near, and are arduously waiting for their long-overdue salaries to be released. Will they move to acquire their salary or will they fold? “Ang Hinihintay Naming…” is written by Ian Jay Formacion and will be starred by Actors Company senior members Antonette Go as Tala and Doray Dayao as Griselda. The production will be directed by Actors Company apprentice Silvester Bagadiong. Find out if they happen to get their money once it premieres on October 16.

AC senior member Jonathan Tadioan will star in a play about a father and a son looking for work while under quarantine by any means necessary in “PM is the Key”, written by Alyette Ang. Tadioan will be portraying Mang Ben, with AJ Benoza as his son Jasper, and Jo Anne Requiestas as Aling Josie. “PM is the Key” marks the directorial debut of Actors Company senior member Lhorvie Nuevo. Take a look at their applications when it premieres on October 17.

Aside from their individual premieres, these works from “Bagong Tagpo” will be released as an anthology playlist on October 18. They will be available to stream on the playlist until October 31.

Finally, TP wraps up the October lineup for PangsamanTanghalan with another online concert for the “Handa, Awit”. Actors JC Santos and Anna Luna return to play as the heroic couple of Lam-ang and Kannoyan, respectively, and perform the inspiring songs from the musical. Joining Luna and Santos are Tex Ordoñez-de Leon, Raflesia Bravo, Gabo Tolentino, and Joshua Cabiladas, along with Actors Company members Jonathan Tadioan, JV Ibesate, Antonette Go, Lhorvie Nuevo, Manok Nellas, and Eunice Pacia. Audiences can relive these songs on its premiere on October 24, 2020.

Come and join us in showcasing these talents this month!

Help and support us on our mission to continue inspiring the public with relevant artistic presentations during these trying times by donating via the fundraising Pantawid Ng Tanghalan.

For sponsorships and collaborations, you can email us at tanghalangpilipinomarketing@gmail.com or contact 0999-8843821