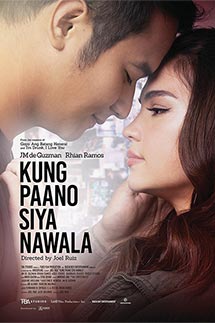 I watched Kung Paano Siya Nawala. The film isn't overly romantic and made me shed tears. It was a great movie because it was honest and raw. It enlightened me that not all stories end with a romantic someone, minsan not every story ends in happily ever after. It is the most honest thing I have seen on local movies. Rhian Ramos played the brilliant, patient and sweet Shana who had a shady past, while Lio was played by JM De Guzman who has face blindness. I related to both flaws of the characters, dahil minsan I thought the assertion I had and the lead I took was enough to keep my exes with me. As it turns out and as the movie goes, it doesn't work that way. Napakahusay ng pag-ganap ni Rhian Ramos sa film na ito, she gave raw and honest emotions. The movie was not created to hurt or disappoint you. It was intended to show and shed light on why your ex left you. 10/10. Would recommend it to anyone who needs a wake up call from reality, this is it.