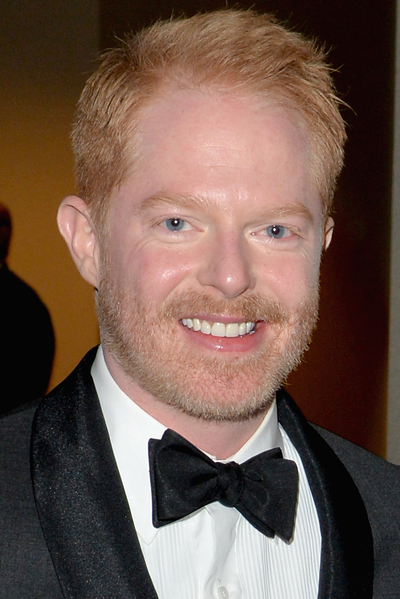 Jesse Tyler Ferguson (born October 22, 1975) is an American actor best known for portraying Mitchell Pritchett on the ABC sitcom Modern Family, which has earned him five nominations for the Primetime Emmy Award for Outstanding Supporting Actor in a Comedy Series. Previously, he played the role of Richie Velch in the CBS sitcom The Class.

Jesse Tyler Ferguson was born in Missoula, Montana, to Anne Ferguson (née Doyle) and Robert "Bob" Ferguson. His parents divorced when he was 18 years old. Ferguson has a brother, Ben Ferguson, and sister, Kelly Ferguson.

Ferguson was named after his paternal grandmother, Jessie Uppercue Ferguson, to whom he was very close growing up. His paternal great-grandfather was also named Jesse.

His family moved when he was young to Albuquerque, New Mexico, where he was raised. At age eight he decided to become an actor, and joined the Albuquerque Children's Theater, where he was a member for six years.

At Albuquerque's St. Pius X High School, Ferguson played Albert Peterson in Bye Bye Birdie and General Bullmoose in Li'l Abner. He participated on the speech and debate team and graduated in 1994. He worked as a dancer/singer at Cliff's Amusement Park.

In New York City, Ferguson worked mainly in Off-Broadway and Broadway theatre, including the Tony Award-winning The 25th Annual Putnam County Spelling Bee, where he originated the role of Leaf Coneybear. Ferguson starred in the Public Theater's 2007 Shakespeare in the Park production of A Midsummer Night's Dream and 2015 production of The Tempest. In the summer of 2015, he played Sir Robin in the Hollywood Bowl production of "Monty Python's Spamalot"

On television, Ferguson was among the large ensemble cast on the short-lived CBS sitcom The Class, playing Richie Velch. Ferguson co-starred in the 2008 thriller Untraceable.

Since 2009, he has played the role of Mitchell Pritchett, the openly gay lawyer on the ABC sitcom Modern Family. For his performance, Ferguson has received five consecutive Emmy Award nominations for Outstanding Supporting Actor in a Comedy Series. He has also appeared as a judge on So You Think You Can Dance.

Ferguson uses his full name as there was already an actor called Jesse Ferguson in the actor's union when he joined.

Ferguson is openly gay and, in September 2012, he announced his engagement to lawyer Justin Mikita, his boyfriend of nearly two years. Mikita has worked for Mamiya Makita Industries (Mikita not to be confused with Makita). They married in New York City on July 20, 2013, with the playwright and screenwriter Tony Kushner officiating at their wedding.

On the process of coming out, Ferguson said he had to tell his father three times (when he was 17, 19 and 21): "It's a coming out process for them as well," and takes time. His sister, Kelly, is a lesbian.