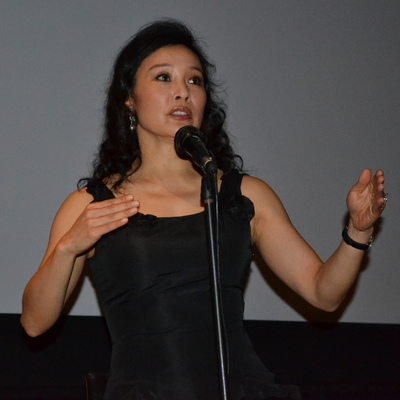 Joan Chong Chen (born April 26, 1961) is a Chinese actress, film director, screenwriter and film producer. She became famous in China for her performance in the 1979 film Little Flower and came to international attention for her performance in the 1987 Academy Award-winning film The Last Emperor. She is also known for her roles in Twin Peaks, Red Rose, White Rose, Saving Face and The Home Song Stories, and for directing the feature film Xiu Xiu: The Sent Down Girl.

Chen Chong was born in Shanghai, China to a family of pharmacologists. (Her grandparent Changshao Zhang was educated at University College London and was later a visiting student at Harvard). She and her older brother, Chase, were raised during the Cultural Revolution. At the age of 14, Chen was discovered on the school rifle range by Jiang Qing, the wife of leader Mao Zedong and major Chinese Communist Party figure, as she was excelling at marksmanship. This led to her being selected for the Actors' Training Program by the Shanghai Film Studio in 1975, where she was discovered by veteran director Xie Jin who chose her to star in his 1977 film Youth as a deaf mute whose senses are restored by an Army medical team. Chen graduated from high school a year in advance, and at the age of 17 entered the prestigious Shanghai International Studies University, where she majored in English.

Chen Chong first became famous in China for her performance alongside Tang Guoqiang in Zhang Zheng's Little Flower in 1979, for which she won the Hundred Flowers Award. Chen portrayed a pre-Maoist revolutionary's daughter, who, reunited with her brother, a wounded Communist soldier, later learned that his doctor was her biological mother. Little Flower was her second film and she soon achieved the status of China's most loved actress; she was dubbed "the Elizabeth Taylor of China" by Time magazine for having achieved stardom while still a teenager.

At age 20, Chen moved to the United States, where she studied filmmaking at California State University, Northridge.

Her first Hollywood movie was Tai-Pan, filmed on location in China. She went on to star in Bernardo Bertolucci's The Last Emperor in 1987 and the David Lynch/Mark Frost television series Twin Peaks as Josie Packard. In 1993 she co-starred in Oliver Stone's Heaven & Earth. She portrayed two different characters in Clara Law's Temptation of a Monk: a seductive princess of Tang dynasty, and a dangerous temptress. The award-winning film was adapted from a novel by Lilian Lee.

Chen married her second husband, cardiologist Peter Hui, on January 18, 1992. She was formerly married to actor Jimmy Lau from 1985 to 1990. Joan and her current husband have 2 daughters and live in San Francisco, USA but spend part of every year in Shanghai, China with Joan's family, so their daughters can be familiar with Chinese culture. Chen began the process of adopting twin girls from Nan Ning in 1998, but cancelled the adoption proceedings after becoming pregnant with her daughter.

During her early years in California Chen attended California State University, Northridge. In 1989, she became a naturalized citizen of the United States. On April 9, 2008, Chen wrote an article entitled "Let the Games Go On" on the Washington Post, about the politicization of the 2008 Summer Olympics in Beijing.