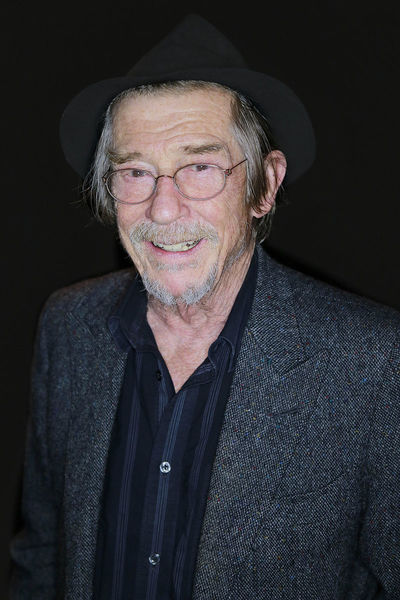 Sir John Vincent Hurt, CBE (born 22 January 1940) is an English actor whose career has spanned six decades. He initially came to prominence for his supporting role as Richard Rich in the film A Man for All Seasons (1966). Since then he has played leading roles as Quentin Crisp in the film The Naked Civil Servant (1975), John Merrick in David Lynch's biopic The Elephant Man (1980), Winston Smith in the dystopian drama Nineteen Eighty-Four (1984), Mr. Braddock in the Stephen Frears drama The Hit (1984), and Stephen Ward in the drama depicting the Profumo affair, Scandal (1989). He is also known for his television roles such as Caligula in I, Claudius (1976), and the War Doctor in Doctor Who.

Hurt's other films include the prison drama Midnight Express (1978), the science-fiction horror film Alien (1979), the adventure film Rob Roy (1995), the political thriller V for Vendetta (2006), the sci-fi adventure film Indiana Jones and the Kingdom of the Crystal Skull (2008), the Harry Potter film series (2001–11), the Hellboy films (2004 and 2008), and the Cold War espionage film Tinker Tailor Soldier Spy (2011). His character's final scene in Alien has been named by a number of publications as one of the most memorable in cinematic history.

Recognisable for his distinctive rich voice, he has also enjoyed a successful voice acting career in films such as Watership Down (1978), the animated The Lord of the Rings (1978), The Black Cauldron (1985) and Dogville (2003), as well as the BBC television series Merlin.

Among other honours, he has received two Academy Award nominations, a Golden Globe Award, and four BAFTA Awards, with the fourth being a Lifetime Achievement recognition for his outstanding contribution to British cinema.

Hurt was born in Chesterfield, Derbyshire, the son of Phyllis (née Massey) (1907-1975), an amateur actress and engineer, and Arnould Herbert Hurt (1904-1999), a mathematician who became a Church of England clergyman and served as vicar of Shirebrook. Hurt's father was also Vicar of St John's parish, Sunderland. In 1937, he moved his family to Derbyshire, where he became Perpetual Curate of Holy Trinity Church. When Hurt was five, his father became the vicar of St. Stephen's Church in Woodville, south Derbyshire, and remained there until 1952.

Hurt had a strict upbringing; the family lived opposite a cinema, but he was not allowed to see films there. He was also not permitted to mix with local children because his parents saw them as "too common".

At the age of eight, Hurt was sent to the Anglican St Michael's Preparatory School in Otford, Kent, where he eventually developed his passion for acting. He decided he wanted to become an actor, and his first role was that of a girl in a school production of The Bluebird (L'Oiseau Bleu) by Maurice Maeterlinck. He has stated that while he was a pupil at the school, he was abused by Donald Cormack (now deceased), then Senior Master of the school and later Headmaster until his retirement in 1981. Hurt has said that Cormack would remove his two false front teeth and put his tongue in the boys' mouths, and how he would rub their faces with his stubble, and that the experience affected him hugely.

Hurt's father moved to Old Clee Church in Grimsby, Lincolnshire, and Hurt (then aged 12) became a boarder at Lincoln School (then a grammar school) in Lincoln, because he had failed the entrance examination for admission to his brother's school. Hurt often went with his mother to Cleethorpes Repertory Theatre, but his parents disliked his acting ambitions and encouraged him to become an art teacher instead. His headmaster, Mr Franklin, laughed when Hurt told him he wanted to be an actor, telling him that he "wouldn't stand a chance in the profession".

Aged 17, Hurt enrolled in Grimsby Art School (now the East Coast School of Art & Design), where he studied art. In 1959, he won a scholarship allowing him to study for an Art Teacher's Diploma (ATD) at Saint Martin's School of Art in London. Despite the scholarship, paying his tuition fees and living expenses was difficult, so he persuaded some of his friends to pose naked and sold the portraits. In 1960, he won a scholarship to RADA, where he trained for two years. He was then cast in small roles on television.

Hurt's first film was The Wild and the Willing (1962), but his first major role was as Richard Rich in A Man for All Seasons (1966). In 1971, he played Timothy Evans, who was hanged for murders committed by his landlord John Christie, in 10 Rillington Place, earning him his first BAFTA nomination for Best Supporting Actor. His portrayal of Quentin Crisp in the TV play The Naked Civil Servant (1975) gave him prominence and earned him the British Academy Television Award for Best Actor. The following year, Hurt won further acclaim for his bravura performance as the Roman emperor Caligula in the BBC drama serial, I, Claudius. In the 2002 TV documentary I Claudius: A Television Epic, Hurt revealed that he had originally declined the role when it was first offered to him, but that series director Herbert Wise had invited him to a special pre-production party, hoping Hurt would change his mind, and that he was so impressed by meeting the rest of the cast and crew that he reversed his decision and took the role.

In 1978, Hurt appeared in Midnight Express, for which he won a Golden Globe and a BAFTA and was nominated for an Academy Award for Best Supporting Actor (the latter of which he lost to Christopher Walken for his performance in The Deer Hunter). Hurt voiced Hazel, the heroic rabbit leader of his warren in the film adaptation of Watership Down and later played the major villain, General Woundwort, in the animated television series version.

His other roles in the 1970s and the beginning of the 1980s included Kane, the first victim of the title creature in the film Alien (1979, a role which he reprised as a parody in Spaceballs); would-be art school radical Scrawdyke in Little Malcolm (1974); and John Merrick in The Elephant Man (1980), for which he won another BAFTA and was nominated for a Golden Globe and an Academy Award for Best Actor. In 1978, he lent his voice to Ralph Bakshi's animated film adaptation of Lord of the Rings, playing the role of Aragorn. He also had a starring role in Sam Peckinpah's critically panned but moderately successful final film, The Osterman Weekend (1983). Also in 1983, he starred as the Fool opposite Laurence Olivier's King in King Lear. Hurt also appeared as Raskolnikov in the 1979 BBC TV miniseries adaptation of Crime and Punishment.

Hurt played Winston Smith in the film adaptation of the novel Nineteen Eighty-Four (1984). In 1985, he starred in Disney's The Black Cauldron, voicing the film's main antagonist, the Horned King. In 1986, Hurt provided the voiceover for AIDS: Iceberg / Tombstone, a public information film warning of the dangers of AIDS. In 1988, he played the title role, the on-screen narrator, in Jim Henson's The StoryTeller TV series. He had a supporting role as "Bird" O'Donnell in Jim Sheridan's film The Field (1990), which garnered him another BAFTA nomination. In 1997, Hurt played the reclusive tycoon S.R. Hadden in Contact.

In 2001, he played Mr Ollivander, the wand-maker, in the first Harry Potter film, Harry Potter and the Philosopher's Stone. He returned for the adaptation of Harry Potter and the Goblet of Fire, though his scenes in that film were cut. He also returned for Harry Potter and the Deathly Hallows – Part 1 and Part 2. In 1999, Hurt provided narration on the British musical group Art of Noise's concept album The Seduction of Claude Debussy. During this time, he narrated a four-part TV series The Universe which was released on DVD in 1999. In the film V for Vendetta (2006), he played the role of Adam Sutler, leader of the Norsefire fascist dictatorship. In May 2008, he appeared in Steven Spielberg's Indiana Jones and the Kingdom of the Crystal Skull as Harold Oxley. He is also the voice of The Great Dragon Kilgharrah, who aids the young warlock Merlin as he protects the future king Arthur, in the BBC television series Merlin.

In 2008, 33 years after The Naked Civil Servant, Hurt reprised the role of Quentin Crisp in An Englishman in New York. This film depicts Crisp's later years in New York.

Hurt has an older brother, Br. Anselm (born Michael), a Roman Catholic convert who became a monk and writer at Glenstal Abbey; Hurt has contributed to his brother's books. Hurt also has an adopted sister, Monica. In 1962, Hurt's father left his parish in Cleethorpes to become headmaster of St. Michael's College in the Central American country of British Honduras. Hurt's mother died in 1975, and his father died in 1999 at the age of 95.

On 24 January 1990, Hurt married American production assistant Joan Dalton, whom he had met while filming Scandal. With her, he had two sons: Alexander "Sasha" John Vincent Hurt (born 6 February 1990) and Nicholas "Nick" Hurt (born 5 February 1993), who are currently residing in County Waterford, Ireland.[citation needed] This marriage ended in 1996 and was followed with a seven-year relationship with Dublin-born presenter and writer Sarah Owens. The couple moved to County Wicklow, where they settled close to their friends, director John Boorman and Claddagh Records founder and Guinness heir Garech Browne. In July 2002, the couple separated. In March 2005, Hurt married his fourth wife, advertising film producer Anwen Rees Meyers. He now lives near Cromer, Norfolk.