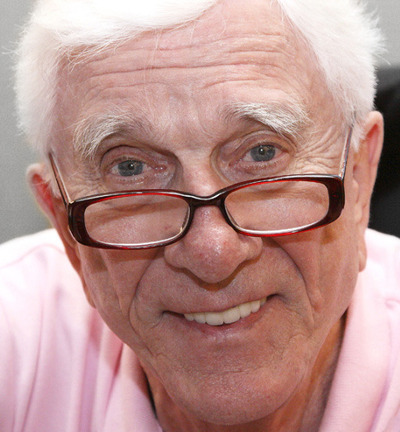 Leslie William Nielsen, OC (11 February 1926 – 28 November 2010) was a Canadian-American actor and comedian. Nielsen appeared in more than one hundred films and 1,500 television programs over the span of his career, portraying more than 220 characters. Born in Regina, Saskatchewan, Canada, Nielsen enlisted in the Royal Canadian Air Force and worked as a disc jockey before receiving a scholarship to Neighborhood Playhouse. Making his television debut in 1948, he quickly expanded to over 50 television appearances two years later. Nielsen made his film debut in 1956, and began collecting his roles in dramas, westerns, and romance films between the 1950s and the 1970s. Nielsen's performance in the films Forbidden Planet and The Poseidon Adventure received positive reviews as a serious actor, although he is primarily known for his comedic roles during the 1980s and the early 1990s.

Although Nielsen's acting career crossed a variety of genres in both television and films, his deadpan delivery in Airplane! marked a turning point in his career, one that would make him, in the words of film critic Roger Ebert, "the Olivier of spoofs." Nielsen enjoyed further success with The Naked Gun film series, based on an earlier short-lived television series Police Squad! in which he also starred. Nielsen's portrayal of comedic characters seemingly oblivious to (and complicit in) their absurd surroundings gave him a reputation as a comedian. Nielsen was recognized with a variety of awards throughout his career, and was inducted into the Canada and Hollywood Walks of Fame.

Nielsen was born on 11 February 1926 in Regina, Saskatchewan. His mother, Mabel Elizabeth (née Davies), was a Welsh immigrant, and his father, Ingvard Eversen Nielsen, was a Danish-born Constable in the Royal Canadian Mounted Police.

Nielsen had two brothers; his older brother, Erik Nielsen (1924–2008), was Deputy Prime Minister of Canada from 1984 to 1986. Ingvard was a troubled man who beat his wife and sons, and Leslie longed to escape. As soon as he graduated from high school at 17, he joined the Royal Canadian Air Force, even though he was legally deaf (he wore hearing aids most of his life).

His half-uncle, Jean Hersholt, was an actor best known for his portrayal of Dr. Christian in the long-running radio series of the same name and the subsequent television series and films. In a 1994 Boston Globe article, Nielsen explained, "I did learn very early that when I would mention my uncle, people would look at me as if I were the biggest liar in the world. Then I would take them home and show them 8-by-10 glossies, and things changed quite drastically. So I began to think that maybe this acting business was not a bad idea, much as I was very shy about it and certainly without courage regarding it. My uncle died not too long after I was in a position to know him. I regret that I had not a chance to know him better."

Nielsen spent several years living in Fort Norman (now Tulita), Northwest Territories where his father was stationed with the Royal Canadian Mounted Police. At the age of 17, following his graduation from Victoria School of Performing and Visual Arts in Edmonton, Nielsen enlisted in the Royal Canadian Air Force and was trained as an aerial gunner during the latter part of World War II (but was too young to be fully trained or sent overseas). He worked briefly as a disc jockey at a Calgary, Alberta radio station, before enrolling at the Lorne Greene Academy of Radio Arts, Toronto. While studying in Toronto, Nielsen received a scholarship to the Neighborhood Playhouse. He noted, "I couldn't refuse, but I must say when you come from the land of the snow goose, the moose and wool to New York, you're bringing every ton of hayseed and country bumpkin that you packed. As long as I didn't open my mouth, I felt a certain security. But I always thought I was going to be unmasked: 'OK, pack your stuff.' 'Well, what's the matter?' 'We've discovered you have no talent; we're shipping you back to Canada.'" He moved to New York City for his scholarship, studying theater and music at the Neighborhood Playhouse, while performing in summer stock theatre. Afterward, he attended the Actors Studio, until making his first television appearance in 1948 on an episode of Studio One, alongside Charlton Heston, for which he was paid US$75.

Nielsen's career began in dramatic roles on television during what is known as "Television's Golden Age", appearing in almost 50 live programs in 1950 alone. Nielsen reported that for his salary that there "[...] was very little gold, we only got $75 or $100 per show." His distinctive voice narrated several documentaries and commercials but, with a handful of exceptions, his early work as a dramatic actor was uneventful. Hal Erickson of Allmovie noted, "...much of Nielsen's early work was undistinguished; he was merely a handsome leading man in an industry overstocked with handsome leading men." In 1956 he made his feature film debut in the Michael Curtiz-directed musical film The Vagabond King. In the Seattle Post-Intelligencer, Nielsen pointed out that he remembers Curtiz as "a sadist, a charming sadist, but a sadist". Nielsen would go on to call this film "The Vagabond Turkey". Though the film was not a box office success, Nielsen caught the eye of producer Nicholas Nayfack who offered him an audition for a role in the science fiction film Forbidden Planet, resulting in Nielsen being signed to a long-term contract by Metro-Goldwyn-Mayer (MGM).

Forbidden Planet became an instant success, and roles in other MGM films such as Ransom! (1956), The Opposite Sex (1956) and Hot Summer Night (1957) followed. In 1957 he won the lead role opposite Debbie Reynolds in the romantic comedy Tammy and the Bachelor, which, as a Chicago Tribune critic wrote in 1998, made people consider Nielsen as both a dramatic actor and a handsome romantic lead. However, dissatisfied with the quality of the films he was offered, calling the studios "[..] a Tiffany, which had forgotten how to make silver", Nielsen left MGM, but not before auditioning for the role of Messala in the 1959 historical piece Ben-Hur. Stephen Boyd was eventually given the role. After leaving the studios, Nielsen landed the lead role in the Disney miniseries The Swamp Fox, as American Revolutionary War hero Francis Marion. In a 1988 interview he reflected on the series, stating, "That was a great experience, because the Disney people didn't do their shows like everyone else, knocking out an episode a week. [...] We only had to do an episode a month, and the budgets were extremely high for TV at that time. We had location shooting rather than cheap studio backdrops, and very authentic costumes." Eight episodes were produced and aired between 1959 and 1961.

Nielsen's supporting role of Dr. Rumack in 1980's Airplane! was a major watershed in his career. The ethos of the movie, a parody of dramatic disaster films such as Zero Hour! and Airport, is largely based on building a comedy around actors who were then known exclusively for their dramatic roles (other stars included Robert Stack, Peter Graves, and Lloyd Bridges). Nielsen was the movie's linchpin, his deadpan delivery contrasting with the continual absurdity surrounding him. When asked, "Surely you can't be serious?", he responds with a curt, "I am serious. And don't call me Shirley." In several interviews he later reflected on the significance of the comedic line: "I thought it was amusing, but it never occurred to me that it was going to become a trademark. It's such a surprise...the thing comes out, people say, 'What did he say?!'" Nielsen also stated that he was "...pleased and honored that [he] had a chance to deliver that line." The comedic exchange was at #79 on the American Film Institute's AFI's 100 Years...100 Movie Quotes. The American Film Institute also included the film in its list of the top ten comedy films of all time.

Critics praised the film, which also proved to be a success with audiences. The film's directors, Jim Abrahams, David Zucker, and Jerry Zucker, chose Nielsen for the role based on his ability to play "a fish in water", stating that "You could have cast funny people and done it with everybody winking, goofing off, and silly...we wanted people to be oblivious to the comedy." For Nielsen, Airplane! marked a shift from dramatic roles to a new focus on deadpan comedy. When it was suggested that his role in Airplane! was against type, Nielsen protested that he had "always been cast against type before," and that comedy was what he always really wanted to do.

In November 2010, Nielsen was admitted to a Fort Lauderdale, Florida hospital for treatment of pneumonia. On 28 November, Doug Nielsen, Nielsen's nephew, announced to the CJOB radio station that Nielsen had died in his sleep, due to complications from pneumonia, around 5:30 pm EST, surrounded by family and friends. He was interred in Fort Lauderdale's Evergreen Cemetery. As a final bit of humor, Nielsen chose "Let 'er Rip" as his epitaph.