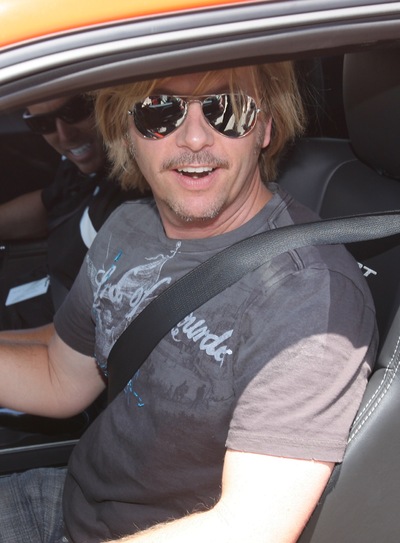 David Wayne Spade (born July 22, 1964) is an American actor, comedian, and television personality. He is best known for his nasally and high pitched voice and his use of cutting and sarcastic one liners and his sometimes childish stage personality. He rose to fame in the 1990s as a cast member on Saturday Night Live, and from 1997 until 2003 when he starred as Dennis Finch on Just Shoot Me!. He also starred as C. J. Barnes, along with Katey Sagal, James Garner and Kaley Cuoco on 8 Simple Rules.

He starred as Russell Dunbar on the CBS sitcom Rules of Engagement. He is also working with TBS on an animated series based on his film Joe Dirt.

Spade was born in Birmingham, Michigan, the son of Judith J. (née Meek), a writer and magazine editor, and Wayne M. Spade, a sales representative. His brothers are Bryan and Andy Spade; Andy Spade is the husband of designer Kate Spade and CEO of Kate Spade New York.

Spade and his family moved to Scottsdale, Arizona when he was 4 years old. Spade attended Saguaro High School and later Scottsdale Community College before transferring to Arizona State University where he earned his Bachelor's degree in business in 1986. He was also a member of the Sigma Alpha Epsilon fraternity. Spade performed standup at the university's long-running sketch comedy show, Farce Side Comedy Hour, on numerous occasions. In the mid-80s he also did standup in the Monday night comedy show at Greasy Tony's Pizza in Tempe, Arizona.

With the help of friend and fellow comedian, Dennis Miller, he joined Saturday Night Live in 1990 as a regular cast member and writer. While there his well-known sarcasm became popular, and his smart aleck characters in a number of sketches were hits. Some of them include: a flight attendant who bids a perceived-as-unpleasant "Buh-Bye" to each passenger upon disembarking; a receptionist for Dick Clark who, as a matter of policy, asks people indiscriminately "And you are?"; and the sarcastic "Hollywood Minute" reporter who communicates with celebrities by means of one-liners. Other characters include Christy Henderson from the Gap Girls, and Karl from the Karl's Video sketches. He also has done impressions of famous celebrities, such as Brad Pitt and Michael J. Fox. According to interviews with Spade, most of the material that he wrote early on was given to Dana Carveyto perform on the show. Due to his relatively low work rate, he was in danger of being fired as a performer, until the Hollywood Minute segment secured his position.

Spade is very sensitive to light. The combination of bright lights on-set and working under sunlight while filming Black Sheep caused permanent damage to his eyes. Spade says of his condition: "I have to wear a hat even indoors and flashes in particular freak me out. I even have to make them turn down the lights in the make-up trailers. I've become such a pain in the butt with this light-sensitive thing, it's a wonder they don't just shoot me!"