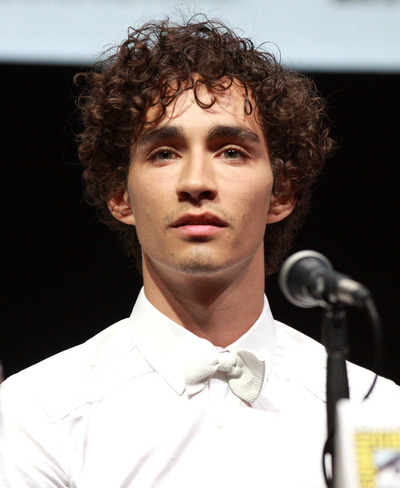 Robert Michael Sheehan; (born 7 January 1988) is an Irish actor. He is best known for television roles such as Nathan Young in Misfits and Darren in Love/Hate, as well as the 2009 film Cherrybomb alongside Rupert Grint. He has also co-starred in the film Killing Bono, alongside Ben Barnes, as Ivan McCormick. He recently starred in John Crowley's production of J. M. Synge's comic play The Playboy of the Western World at the Old Vic Theatre, London, which finished in November 2011.

He has three IFTA nominations and one BAFTA nomination. He also shared a BAFTA award with the cast of Misfits.

Sheehan was born in County Laois, Ireland, the son of Maria and Joe Sheehan. He was born Robert Michael Sheehan, and added Adam as his confirmation name, becoming known as Robert Michael Adam Sheehan. He is the youngest of three children. His father was a garda. He played the banjo, the bodhrán, and the spoons at school, joking that he was like "Footloose with spoons", and participated in Fleadh Cheoil while at school. He first became interested in acting in primary school, in St. Paul's in Portlaoise, when he played Oliver in "Oliver with a Twist". Robert first considered acting when his mother took him to an audition for Song for a Raggy Boy when he was fourteen. He was chosen for the film, which was shot for three months in West Cork. He stated that he still keeps in touch with some of the boys from the film, and described filming as an adventure. When he was sixteen, he played the crippled boy in Cripple of Innishmaan with Open Door productions, and said afterwards that there is nothing like good theatre.

He studied for a year at Galway-Mayo Institute of Technology at the age of 17, but left his course of Film and TV studies after a year as he failed and did not return for the repeats, deciding that life behind the camera was not for him. He has been quoted as saying, "I'm not sure if I want to be an actor. I want to go to college but not to study acting. But I'd like to do it to see where it takes me, so I'll keep at it. I never really made any plans of any sort. As long as I can keep getting a few jobs, I will be grateful. It is great fun and wonderfully rewarding for a young fella. I will continue as long as I keep getting work."

He said his parents were wonderfully supportive, and that his mother was virtually his manager in the early days of career, as well as his chauffeur, driving him to and from auditions and film sets.

Since then he has appeared in a number of feature films including A Dublin Story, Ghostwood, An Créatúr, Summer of the Flying Saucer and Season of the Witch. On television, he appeared in 15 episodes of Foreign Exchange (Magma Film/9 Network Australia) as Cormac MacNamara and in all 13 episodes of Young Blades (Insight/PAX TV) as Louis XIV of France. More recently, Robert has appeared in The Clinic (Parallel Films/RTÉ), Bel's Boys (ITV) and in Season 2 of The Tudors (Showtime/BBC). In March and April 2008, he appeared in the leading role of Addison Teller in the short-lived series Rock Rivals produced by Shed Productions for ITV. In July 2008, he appeared in the role of Liam in Bitter Sweet, a two-part RTÉ comedy drama directed by Declan Eames.

In 2010, he was nominated for an IFTA award in the Rising Star category. He was chosen to redo the voice of Ray in A Turtle's Tale: Sammy's Adventures, originally voiced by Anthony Anderson. In October 2010, he was offered the part of Darren, a member of gangland Dublin in the four-part drama Love/Hate on RTÉ One (Irish national television). Sheehan received a call from his agent, Rose Parkinson, who told him he'd been offered the part in a TV drama directed by David Caffrey. The Portlaoise actor said he would do it, and didn't care what it was about, delighted to be involved in a drama which is directed by David Caffrey, someone he greatly admired. He stated he was "chuffed he had heard of [him] and had seen [him] in the Red Riding Trilogy." Sheehan is set for the lead role in the British-Italian natural thriller film Bleak Sea.