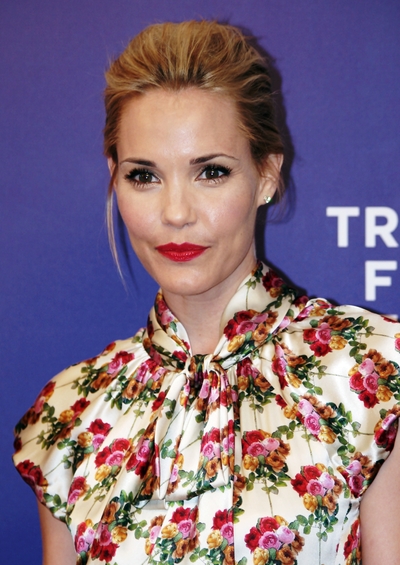 Leslie Louise Bibb (born November 17, 1974) is an American fashion model and actress. Bibb transitioned into film and television in the late 1990s. She played minor roles in television series Home Improvement and Crossing Jordan, before making her film debut in the Howard Stern biopic Private Parts. She scored her first recurring role in the show The Big Easy, followed by a film role in This Space Between Us.

Bibb's role as Brooke McQueen on the WB Network dramedy series Popular (1999–2001) brought her to the attention of a wider audience; she received a Teen Choice Award for Television Choice Actress for the role. During breaks in filming the series, she also played notable roles in the films The Skulls and See Spot Run. She had a recurring role in the medical–drama show ER (2002–2003). Bibb was cast as Carly Bobby in the Will Ferrell comedy film Talladega Nights: The Ballad of Ricky Bobby, followed by minor supporting roles in the films Iron Man, Law Abiding Citizen, and Zookeeper.

Bibb was born in Bismarck, North Dakota. Her father died when she was three years old. Bibb subsequently moved to Richmond, Virginia, with her three older sisters, and her mother, Betty Blakemore Sulzbach, who worked as a director at Virginia's Office of Consumer Affairs. Bibb attended the all-girl Saint Gertrude High School, from where she graduated in 1991.

In 1990, The Oprah Winfrey Show and the Elite Agency held a nationwide modeling search. Bibb's mother submitted photos of her 16-year-old daughter. The celebrity judges, John Casablancas,Naomi Campbell, Linda Evangelista, and Iman chose Bibb to be the winner. After finishing her junior year, Bibb flew to New York City to sign a contract with Elite Agency and modeled over that summer and went on a trip to Japan. Bibb returned to the United States for her senior year and graduated in 1991. Later, Bibb decided to attend the University of Virginia. After a single semester, Bibb left school and moved to New York City to pursue her full-time modeling career. Bibb's modeling photographs have appeared in the magazines Maxim and FHM. She also attended the William Esper acting studio for three years.

After one-episode roles in the television shows Pacific Blue and Home Improvement, Bibb's first film role came in the comedy Private Parts. This was followed by her first television series, where she replaced the departed Susan Walters as the female lead in the second season of The Big Easy. Most critics panned the show, and it was canceled months later after low ratings.

In 1999, Bibb had her big break appearing as a lead character on the WB Network television series Popular. Her role was Brooke McQueen, the most popular girl at Kennedy High School who is beautiful, a straight-A student, and a cheerleader. The show was a major success among teenagers and led Bibb to more recognizable film roles. The show garnered her a Teen Choice Award for Television Choice Actress and a Young Hollywood Award nomination for Exciting New Face – Female.

Leslie has reportedly been in a relationship with actor Sam Rockwell since 2007. They appeared in Iron Man 2 together.