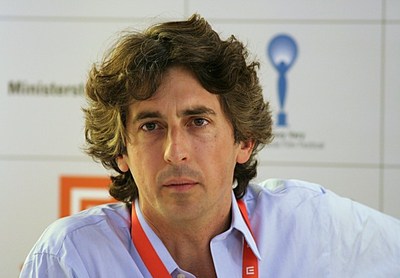 Alexander Payne (born Constantine Alexander Payne; February 10, 1961) is an American film director, screenwriter, and producer, known for the films Election (1999), About Schmidt (2002), Sideways (2004), The Descendants (2011), and Nebraska (2013). His films are noted for their dark humor and satirical depictions of contemporary American society.

Payne was born in Omaha, Nebraska, the son of Peggy (née Constantine) and George Payne, restaurant owners. Payne is the youngest of three sons and grew up in what is now known as the Dundee-Happy Hollow Historic District, the same neighborhood as billionaire Warren Buffett.

His father is of Greek and German descent, and his mother is of Greek ancestry. His paternal grandfather, Nicholas "Nick" Payne, anglicized the last name from Papadopoulos. His family comes from three areas in Greece: the island of Syros, Livadia, and Aegio.

Payne's family was part of the fabric of Omaha, which he references as part of his upbringing. His grandfather was one of the original owners who founded The Virginia Cafe, with Payne's father taking over the restaurant. Payne grew up going there regularly as a child. The Virginia Cafe was a well-known Omaha restaurant that was noteworthy for its connection to historic events in Nebraska at the time: the 1935 streetcar strike, significant sales of Liberty Bonds during the Second World War, and its place—from WWII through Vietnam—for “last meals” to soldiers en route to basic training. It was also open 24-hours a day, which was not common at the time. The Virginia was destroyed in a fire in 1969—the W. Dale Clark Library is located at its former site.

In Omaha, Payne attended Brownell-Talbot School, Dundee Elementary School, and Lewis and Clark Junior High. He graduated from Creighton Prep for high school in 1979. At Prep, Payne wrote a humor column for his high school newspaper and was the editor of the high school yearbook.

Payne then attended Stanford University, where he double majored in Spanish and History. As a part of his Spanish degree, he studied at the University of Salamanca (Spain) and later he lived a few months in Medellin (Colombia) where he published an article about the development and the social changes between 1900 and 1930. Payne got his MFA in 1990 from the UCLA Film School.

Payne's journey into filmmaking "began in the 1960s when his father, owner of The Virginia Restaurant in downtown Omaha, received an 8mm projector from Kraft Foods as a bonus for being a good customer." Payne said that when he was about 14 years old he got a used Super 8mm film camera.

A short time after getting his MFA from UCLA Film School—and after his successful thesis film, The Passion of Martin had attracted industry attention—Payne got a writing/directing deal with Universal Pictures. The ensuing screenplay, which was turned down, would ultimately become About Schmidt. He said, "I could write anything I wanted and if they want it I would direct it. I was paid for that $125,000 of which because of taxes, agent and lawyer, you keep about half. So, that was about $60,000 which I lived on for five years because I never changed my lifestyle from that of a student. And then I did a couple of film jobs and also, during film school, I worked as a catering waiter."

Payne sees his talent as being one of learned economy. He refers to the essay written by Tennessee Williams on The Catastrophe of Success.

Payne married Korean-Canadian actress Sandra Oh on January 1, 2003, after dating her for three years, and directing her in Sideways. On March 12, 2005, a publicist announced their separation. The divorce was officially finalized on December 22, 2006, although the former couple took more than two years to settle their finances.