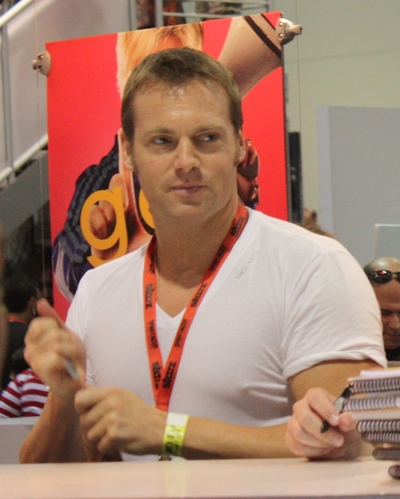 Shanks grew up in Kamloops, British Columbia. After graduating from the University of British Columbia with a Bachelor of Fine Arts in Theatre in 1994, he appeared in several stage productions, serving a two-year apprenticeship with the prestigious Stratford Festival in Ontario. He made guest appearances on TV series like Highlander and University Hospital, appeared in the TV movie A Family Divided and had a small role in The Call of the Wild, before winning the role of Daniel Jackson on Stargate SG-1.

Shanks played archaeologist Dr. Daniel Jackson throughout the first five seasons of Stargate SG-1 before leaving the show, citing creative differences concerning the under-use of his character and the direction of the show as a whole. He made several guest appearances throughout the sixth season playing his own character, as well as voicing the Asgard character Thor. Shanks returned for the seventh and subsequent seasons, winning the Leo Award for Best Lead Performance By A Male in a Dramatic Series in 2004 for the seventh season episode "Lifeboat". During the series' tenth and final season, he signed up for 16 of the 20 episodes, taking some time off in March 2006 for the birth of his third child (second with wife and occasional co-star Lexa Doig).

Shanks' eldest child is Tatiana (b. August 1998). She was conceived from his relationship with model and actress Vaitiare Bandera, who portrayed Sha're, his character's wife, on Stargate SG-1.

On August 2, 2003, Shanks married actress Lexa Doig, whom he met in 2001 while guest-starring on the series Andromeda, in which she starred. (They would also work together on Stargate SG-1, when Doig was cast as Dr. Carolyn Lam, a recurring character in seasons nine and ten.) They have two children together: daughter Mia Tabitha Shanks (b. September 13, 2004) and son Samuel David Shanks (b. March 19, 2006).