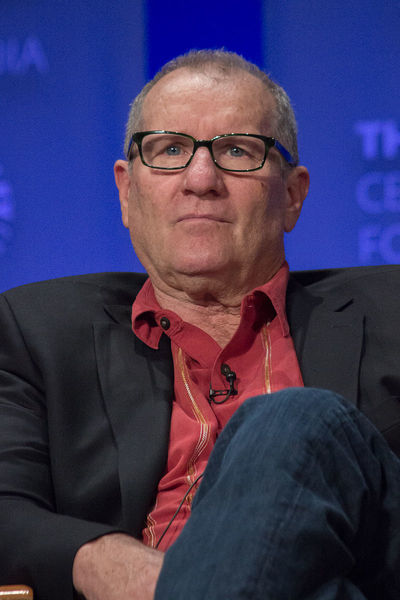 Edward Philip "Ed" O'Neill, Jr. (born April 12, 1946) is an American actor. He is best known for his role as the main character, Al Bundy, on the Fox Network sitcom Married... with Children, for which he was nominated for two Golden Globes. Since 2009, O'Neill has played patriarch Jay Pritchett on the award-winning ABC sitcom Modern Family, a role for which he has been nominated for three Primetime Emmy Awards and won four Screen Actors Guild Awards.

O'Neill was born into an Irish Catholic family in Youngstown, Ohio. His mother, Ruth Ann (née Quinlan), was a homemaker and social worker, and his father, Edward Phillip O'Neill, was a steel mill worker and truck driver. O'Neill attended Ursuline High School and won a football scholarship to Ohio University, where he majored in history, also having joined the Mu chapter of the Delta Tau Delta fraternity. O'Neill left Ohio after his sophomore year; he spent more time playing sports and partying than studying and also feuded with his coach.

He transferred to Youngstown State University, where he was a defensive lineman. While an undergraduate, O'Neill pledged Delta Sigma Phi and was initiated into the Delta Sigma chapter there. Rumors abound that he was an avid partier. O'Neill was signed as an undrafted free agent by the Pittsburgh Steelers in 1969, but was cut in training camp. Later, on Married... with Children, O'Neill played a former high-school football star who had failed to make it big and constantly reminisced about his "glory days" at Polk High ("I once scored four touchdowns in a single game"). As part of this theme, former Pittsburgh Steelers great and Pro Football Hall of Fame quarterback Terry Bradshaw also made two guest appearances on the show. O'Neill was also a social studies teacher at Ursuline High School before becoming an actor.

O'Neill re-enrolled at YSU after being cut by the Pittsburgh Steelers and was one of the first students at the school's then new theatre program. He played Lennie in a stage production of John Steinbeck's Of Mice and Men at the American Repertory Theater in Cambridge, Massachusetts. In 1979, he played a boxer opposite Danny Aiello in the Broadway play Knockout. In 1985, O'Neill appeared alongside Jeff Kinsland in a Red Lobster commercial and made a brief guest appearance in The Equalizer. In 1986, he was cast as the character of NYPD Police Detective Jimmy "Popeye" Doyle for the planned television series Popeye Doyle. The Popeye Doyle character originally appeared in the motion picture The French Connection (played by Gene Hackman). The two-hour made-for-television movie/pilot was filmed and shown on network television. O'Neill received good reviews for his performance, and the pilot received good ratings, but the series was not picked up for production.

In 1986, O'Neill landed the lead role of Al Bundy in Fox Network's Married... with Children, an American sitcom about a dysfunctional family living in Chicago. It was the first primetime television series to air on the Fox Network as a midseason replacement, debuting April 5, 1987 and concluding after 11 seasons on June 9, 1997.

During and following the success of Married... with Children, O'Neill appeared in several movies, including The Bone Collector, Little Giants, and Dutch. He also had small parts in Wayne's World and Wayne's World 2, and appeared as Relish the Troll King in The 10th Kingdom. O'Neill made a brief appearance on the comedy variety show In Living Color, playing the "Dirty Dozens" champion who defeats the challenger, played by Jamie Foxx. He also made a cameo on the sitcom 8 Simple Rules as the ex-boyfriend of Cate S. Hennessy (played by Katey Sagal, who portrayed O'Neill's TV wife Peg Bundy on Married with Children). He appeared in the movie The Adventures of Ford Fairlane with Andrew Dice Clay and in Cruising with Al Pacino. During the mid-1990s, he had a long string of appearances in commercials for 1-800-COLLECT.

In 2008, O'Neill appeared in an advertisement for then-presidential candidate Barack Obama as "Al the Shoesalesman".

In January 2009, O'Neill reunited with David Faustino (Bud Bundy from Married with Children) for two episodes of Faustino's show Star-ving. O'Neill also appeared with the entire cast of Married with Children again when they were honored at the 7th Annual TV Land Award show in 2009.

Since 2009, O'Neill has played the role of Jay Pritchett on the ABC sitcom Modern Family, a role that earned him three Primetime Emmy Award nominations in 2011, 2012, and 2013.

Since 1986, O'Neill has been married to actress Catherine Rusoff, who appeared in two episodes of Married... with Children. In 1989, the couple separated but reconciled in 1993. They have two daughters: Sophia, born in 1999, and Claire, born in 1996. The couple currently lives in Los Angeles.

After being introduced to Brazilian Jiu-Jitsu by his friend writer/director John Milius, O'Neill has trained in the martial art for 22 years under the mentoring of Rorion Gracie. In December 2007, O'Neill received his black belt. In the 2012 TV documentary I Am Bruce Lee, O'Neill states that he considers getting his black belt "the greatest achievement of my life, apart from my children."