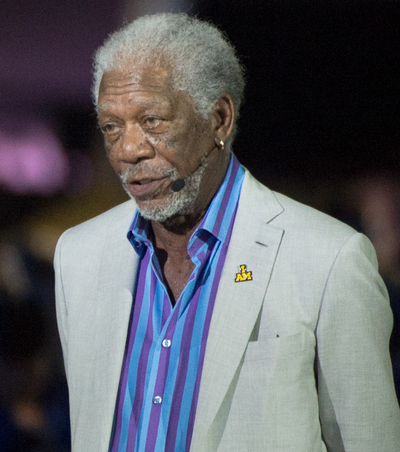 Morgan Freeman was born in Memphis, Tennessee, on June 1, 1937. He is the son of Mayme Edna (née Revere), a teacher, and Morgan Porterfield Freeman, a barber who died April 27, 1961, from cirrhosis. He has three older siblings. According to a DNA analysis, some of his ancestors were from Niger. Freeman was sent as an infant to his paternal grandmother in Charleston, Mississippi. He moved frequently during his childhood, living in Greenwood, Mississippi; Gary, Indiana; and finally Chicago, Illinois.

Freeman made his acting debut at age nine, playing the lead role in a school play. He then attended Broad Street High School, a building which serves today as Threadgill Elementary School, in Greenwood, Mississippi. At age 12, he won a statewide drama competition, and while still at Broad Street High School, he performed in a radio show based in Nashville, Tennessee. In 1955, he graduated from Broad Street, but turned down a partial drama scholarship from Jackson State University, opting instead to enlist in the United States Air Force. Freeman served in the U.S. Air Force as an Automatic Tracking Radar Repairman and rose to the rank of Airman 1st Class.

After four years in the military, he moved to Los Angeles, California, where he took acting lessons at the Pasadena Playhouse and dancing lessons in San Francisco in the early 1960s and worked as a transcript clerk at Los Angeles City College. During this period, Freeman also lived in New York City, working as a dancer at the 1964 World's Fair, and in San Francisco, where he was a member of the Opera Ring musical theater group. He acted in a touring company version of The Royal Hunt of the Sun, and also appeared as an extra in the 1965 film The Pawnbroker. Freeman made his off-Broadway debut in 1967, opposite Viveca Lindfors in The Nigger Lovers (about the civil rights era "Freedom Riders"), before debuting on Broadway in 1968's all-black version of Hello, Dolly! which also starred Pearl Bailey and Cab Calloway.

Although his first credited film appearance was in 1971's Who Says I Can't Ride a Rainbow?, Freeman first became known in the American media through roles on the soap opera Another World and the PBS kids' show The Electric Company (notably as Easy Reader, Mel Mounds the DJ, and Vincent the Vegetable Vampire).

Beginning in the mid-1980s, Freeman began playing prominent supporting roles in many feature films, earning him a reputation for depicting wise, fatherly characters. As he gained fame, he went on to bigger roles in films such as the chauffeur Hoke in Driving Miss Daisy, and Sergeant Major Rawlins in Glory (both in 1989). In 1994, he portrayed Red, the redeemed convict in the acclaimed The Shawshank Redemption. In the same year he was a member of the jury at the 44th Berlin International Film Festival.

He also starred in such films as Robin Hood: Prince of Thieves, Unforgiven, Seven, and Deep Impact. In 1997, Freeman, together with Lori McCreary, founded the film production company Revelations Entertainment, and the two co-head its sister online film distribution company ClickStar. Freeman also hosts the channel Our Space on ClickStar, with specially crafted film clips in which he shares his love for the sciences, especially space exploration and aeronautics.

After three previous nominations—a supporting actor nomination for Street Smart, and leading actor nominations for Driving Miss Daisy and The Shawshank Redemption—he won the Academy Award for Best Supporting Actor for his performance in Million Dollar Baby at the 77th Academy Awards. Freeman is recognized for his distinctive voice, making him a frequent choice for narration. In 2005 alone, he provided narration for two films, War of the Worlds and the Academy Award-winning documentary film March of the Penguins.

Freeman appeared as God in the hit film Bruce Almighty and its sequel, Evan Almighty, as well as Lucius Fox in the critical and commercial success Batman Begins and its sequels, The Dark Knight and The Dark Knight Rises. He starred in Rob Reiner's 2007 film The Bucket List, opposite Jack Nicholson. He teamed with Christopher Walken and William H. Macy for the comedy The Maiden Heist, which was released direct to video due to financial problems with the distribution company. In 2008, Freeman returned to Broadway to co-star with Frances McDormand and Peter Gallagher for a limited engagement of Clifford Odets's play, The Country Girl, directed by Mike Nichols.

From his early life, Freeman has two extramarital children; one of them is Alfonso Freeman.

He married Myrna Colley-Lee on June 16, 1984. The couple separated in December 2007. Freeman's attorney and business partner Bill Luckett announced in August 2008 that Freeman and his wife were in divorce proceedings. On September 15, 2010, their divorce was finalized in Mississippi.

Freeman and Colley-Lee adopted Freeman's stepgranddaughter from his first marriage, E'dena Hines, and raised her together. On August 16, 2015, 33-year-old Hines was murdered in New York City.

In 2008 the TV series African American Lives 2 revealed that some of Freeman's great-great-grandparents were slaves who migrated from North Carolina to Mississippi. Freeman discovered that his Caucasian maternal great-great-grandfather had lived with, and was buried beside, Freeman's African-American great-great-grandmother (in the segregated South, the two could not marry legally at the time). A DNA test on the series stated that he is descended in part from the Songhai and Tuareg peoples of Niger.