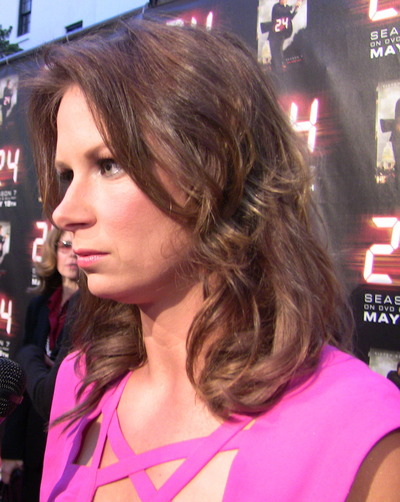 Mary Lynn Rajskub (born June 22, 1971) is an American actress and comedienne, best known for her leading role as Chloe O'Brian in the Fox action-thriller 24.

Rajskub was born in Detroit, Michigan and raised in Trenton, Michigan. Her father is a pipefitter of Czech descent and her mother worked as a pharmacist's assistant. Rajskub played the clarinet in the school band, and played Frenchie in the musical Grease. One of her childhood inspirations was Moonlighting with Bruce Willis and Cybill Shepherd.

Her first part was as an Oompa-Loompa in a community theater production of Willy Wonka & the Chocolate Factory and her first starring role was Raggedy Ann. Rajskub moved to Los Angeles where she worked as a waitress in a Hard Rock Cafe and as a ticket-taker at the Beverly Center movie theater before becoming an actress.

Rajskub's most notable role is CTU Systems analyst Chloe O'Brian on 24, which she joined in 2003 at the start of the show's third season. Her character was a hit with viewers and critics and was one of the few cast members to return in the show's fourth season. After being a regular guest star for two seasons, Rajskub became a main cast member in the show's fifth season. By the end of the series she was lead female, with top billing second only to Kiefer Sutherland. Rajskub's character Chloe O'Brian also had the honor of saying the final words of the series in the season 8 series finale.

Rajskub dated David Cross, who introduced her to Mr. Show, and left the show when they broke up after the end of the second season. Afterwards, she dated music producer Jon Brion for five years until they broke up in the fall of 2002.

Rajskub later dated comedian Duncan Trussell, whom she subsequently threw out after their breakup, forcing Trussell to live with fellow comedian and friend Joe Rogan.

Her son, Valentine Anthony, was born on July 24, 2008. She married her boyfriend Matthew Rolph, a personal trainer, on August 1, 2009 in an impromptu wedding in Las Vegas.

She is openly bisexual.