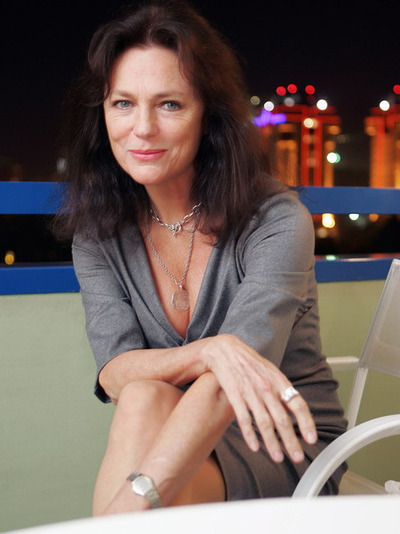 Bisset was born Winifred Jacqueline Fraser Bisset in Weybridge, Surrey, England, the daughter of Arlette Alexander, a lawyer turned housewife, and Max Fraser Bisset, a general practitioner. She was brought up in Reading, Berkshire, where she lived in the suburb of Tilehurst. Her father was Scottish and her mother was of French and English descent; Bisset's mother cycled from Paris and boarded a British troop transport to escape the Germans during World War II. Bisset has a brother, Max. Her mother taught her to speak French fluently, and she was educated at the Lycée Français Charles de Gaulle in London. She had taken ballet lessons as a child and began taking acting lessons and fashion modelling to pay for them. When Bisset was a teenager, her mother was diagnosed with disseminating sclerosis. In the following years while Bisset was working as an actress in Hollywood, she made frequent trips back home in order to care for her mother, which she says got in the way of her personal relationships.

Bisset made her screen debut with a bit part in The Knack ...and How to Get It (1965). Her first speaking role was in the 1966 film Cul-de-sac, starring Donald Pleasence and directed by Roman Polanski. She was cast in the romance film Two for the Road (1967) starring Audrey Hepburn, and played her first lead role opposite James Brolin in The Cape Town Affair (1967). She participated in the 1967 James Bond satire, Casino Royale, as Miss Goodthighs. In 1968, she replaced Mia Farrow to star opposite Frank Sinatra in The Detective; Farrow and Sinatra had split shortly before production began and the role was given to Bisset, who received special billing in the film's credits.

Bisset's break-out role was as Steve McQueen's girlfriend in the hit action film Bullitt, also released in 1968. The following year she received her first Golden Globe nomination as New Star of the Year for her performance in The Sweet Ride, and played her first sexy "older woman" (at 25) in The First Time (1969), with Ricky Kelman, who is six years her junior. She was one of the many stars in the blockbuster disaster film Airport (1970), a Best Picture nominee in which she acted opposite Dean Martin and Helen Hayes. She co-starred with Sean Connery in Murder on the Orient Express (1974).

Bisset has never married, though she has had several lengthy romances. These include a relationship with the actor Michael Sarrazin that lasted over ten years and with the Russian-American dancer and actor Alexander Godunov. "I feel like I was married to them because I was very dedicated to them", she said in a 2008 interview. “But I also used to feel claustrophobic. Like many people who don’t easily commit, I think I had a fear of being known; I was not sure there was anybody inside there.”

She divides her time between homes in England and Beverly Hills, California.