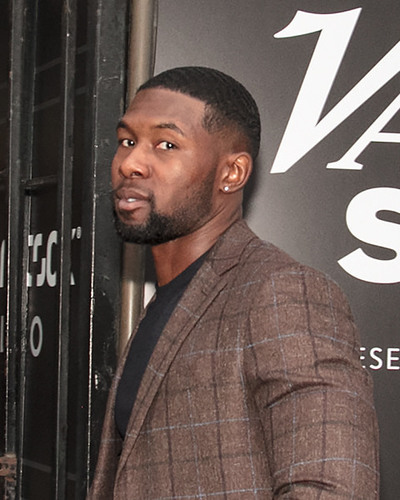 Trevante Nemour Rhodes (born February 10, 1990) is an American actor. He won several accolades and achieved widespread recognition in 2016 for his performance as Chiron in the Academy Award-winning film Moonlight. In his youth, he was an accomplished track and field sprinter, winning a gold medal at the Pan American Junior Athletics Championships in 2009.

Rhodes was born in Ponchatoula, Louisiana, to Demour Dangelo and Jessi Rhodes. His family moved to Little Elm, Texas when he was ten. He has one brother, Giovanni. At Little Elm High School, Rhodes played running back in an option offense with Cole Beasley at quarterback. Over his high school career, Rhodes earned four letters in both football and track and field, where he competed as a sprinter specializing in the 100 and 200 meter dash. As a junior, Rhodes finished second behind Whitney Prevost over both distances at the 2007 UIL Track and Field Championships at Mike A. Myers Stadium. While his senior year was cut short by an ACL injury on the football field, he still earned an athletic scholarship in track and field to the University of Texas at Austin. He studied kinesiology.

Rhodes competed for the Texas Longhorns as a sprinter from 2008 to 2012. At the 2009 Pan American Junior Athletics Championships in Port of Spain, Trinidad and Tobago, Rhodes helped the U.S. squad to a gold medal in the 4×100 metres relay.

After graduation, Rhodes moved to Los Angeles and immediately began working as an actor, playing supporting roles in the Terrence Malick film Song to Song, the Nacho Vigalondo film Open Windows opposite Elijah Wood, the Eddie O’Keefe film Shangri-La Suite and the Matt Jones / Dave Hill film The Night Is Young. Trevante played the role of 'Ramsey' in the Tyler Perry / OWN series If Loving You Is Wrong. His television credits include the Fox series Gang Related and the HBO series Westworld.

Rhodes rose to fame for his much praised performance in the 2016 film Moonlight, directed by Barry Jenkins, where he played the lead role of the adult Chiron. While talking about the movie in an interview with Out, Rhodes said: "Being a black person in America right now is shit, being a homosexual in America right now is shit, and being a black homosexual is the bottom for certain people. That’s why I’m so excited for people to see Moonlight. I don’t feel like there’s a solution for our problems, but this movie might change people. That’s why you do it — because you feel like you’re doing something that matters. This is someone’s story." The film has won the Golden Globe Award for Best Picture – Drama and the Academy Awards for Best Picture and Best Adapted Screenplay.

In January 2017, Rhodes joined the cast of the upcoming movie The Predator, slated for a 2018 release. In February 2017, he was featured on Calvin Klein's 2017 Spring underwear campaign along with Moonlight stars Mahershala Ali, Ashton Sanders, and Alex Hibbert. In late 2017, he appeared in the music video "Family Feud" by Jay-Z.