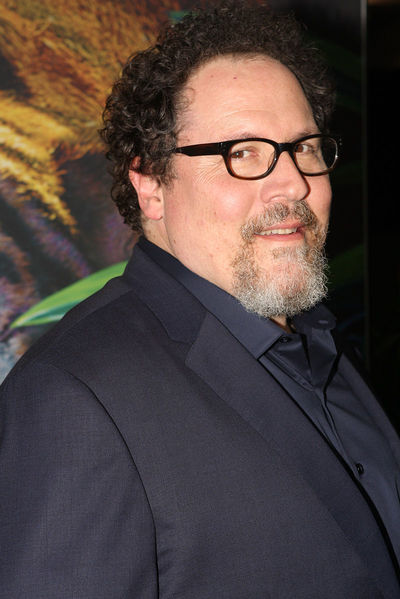 Jonathan Kolia "Jon" Favreau (born October 19, 1966) is an American actor, filmmaker and comedian. As an actor, he is best known for his roles in Rudy, Swingers (which he also wrote), Very Bad Things, The Break-Up, and Chef. His notable directorial efforts include Elf, Iron Man, Iron Man 2, Cowboys & Aliens, Chef, and The Jungle Book. He also served as an executive producer on The Avengers, Iron Man 3, and Avengers: Age of Ultron. His most prominent television role was that of Pete Becker, Monica Geller's boyfriend during season three of the television sitcom Friends. He produces films under his banner Fairview Entertainment. The company has been credited as co-producers in most of Favreau's directorial ventures.

Favreau was born in Flushing, Queens, New York, the son of Madeleine, an elementary school teacher who died of leukemia in 1979, and Charles Favreau, a special education teacher. His mother was Jewish (of Russian Jewish descent), and his father is a Catholic of Italian and French-Canadian ancestry. Favreau attended Hebrew school and had a Bar Mitzvah.

Favreau graduated from the Bronx High School of Science in 1984 and attended Queens College from 1984 to 1987, before dropping out. His friend from college, Mitchell Pollack, said that Favreau went by the nickname "Johnny Hack" because of his talent in the game Hacky Sack. He briefly worked for Bear Stearns on Wall Street before returning to Queens College for a semester in early 1988. He dropped out of college for good (a few credits shy of completing his degree), and in the summer of 1988, moved to Chicago to pursue a career in comedy. He performed at several Chicago improvisational theaters, including the ImprovOlympic and the Improv Institute.

While in Chicago, Favreau landed his first film role alongside Sean Astin as football tutor D-Bob in the sleeper hit Rudy (1993). Favreau met Vince Vaughn – who played a small role in this film – during shooting. The next year, he appeared in the college film PCU alongside Jeremy Piven, and also stepped into the world of television in the 1994 episode of Seinfeld titled "The Fire" as Eric the Clown. He then moved to Los Angeles, where he made his breakthrough in 1996 as an actor-screenwriter with the film Swingers, which was also Vaughn's breakthrough role as the glib and extremely confident Trent Walker, a foil to Favreau's heartbroken Mike Peters. In 1997, he appeared on the popular television sitcom Friends, portraying Pete Becker – Monica Geller's millionaire boyfriend who competes in the Ultimate Fighting Championship (UFC) – for several episodes. Favreau made appearances in the sketch-comedy series, Tracey Takes On... in both 1996 and 1997.

He rejoined Piven in 1998 as part of Very Bad Things (1998). In 1999, he starred in the television film Rocky Marciano, based on the life of the only undefeated world heavyweight champion, Rocky Marciano. He later appeared in Love & Sex (2000), co-starring Famke Janssen. Favreau appeared in 2000's The Replacements as maniacal linebacker Daniel Bateman, and that same year he played himself in The Sopranos episode "D-Girl", as a Hollywood director who feigns interest in developing mob associate Christopher Moltisanti's screenplay in order to collect material for his own screenplay.

He was a guest-director for an episode of the college dramedy Undeclared in 2001, and Favreau got some screen time as lawyer Foggy Nelson in the 2003 movie Daredevil (2003) (considerably more in the Director's Cut version). He also starred in The Big Empty (2003), directed by Steve Anderson. His character was John Person, an out of work actor given a strange mission to deliver a blue suitcase to a man named Cowboy in the desert.

In 2001, he made his film directorial debut with another self-penned screenplay, Made. Made once again teamed him up with his Swingers co-star Vince Vaughn. In the fall of 2003, he scored his first financial success as a director of the hit comedy Elf starring Will Ferrell, James Caan, and Peter Dinklage. Also in 2003, Favreau had a small part in Something's Gotta Give (a film starring Diane Keaton and Jack Nicholson); Favreau played Leo, Harry Sanborn's (Nicholson) personal assistant, who visited Harry in the hospital. In 2005, Favreau directed the film adaptation of Zathura. Never to turn his back on acting, Favreau still makes regular appearances in film and television. He reunited with friend Vince Vaughn in the much-hyped hit romantic comedy The Break-Up and appeared in My Name Is Earl as a reprehensible fast food manager. Favreau also made a guest appearance in Vaughn's Wild West Comedy Show.

Also in 2005, Favreau appeared as a guest judge and executive representative of Sony corporation in week five of NBC primetime reality TV business show, The Chef. He was called upon to judge the efforts of the show's two teams of contestants, who were assigned the task of designing and building a float to publicise his 2005 Sony Pictures movie, Zathura.

Favreau also has a TV series called Dinner for Five which airs on the cable TV channel IFC. On April 28, 2006, it was announced that Favreau was signed to direct the long awaited Iron Man movie. Released on May 2, 2008, the film was a huge critical and commercial success, solidifying Favreau's reputation as a director.

Iron Man was the first Marvel-produced movie under their alliance with Paramount, and Favreau served as the director and an executive producer. During early scenes in Iron Man, Favreau appears as Tony Stark's loyal friend, and driver, Happy Hogan. He also wrote two issues of a planned mini-series for Marvel Knights titled Iron Man: Viva Las Vegas, that debuted in September 2008 before being cancelled in November 2008. Favreau also directed the film's sequel, Iron Man 2. in 2008 he played Denver in Four Christmases with Vince Vaughn.

Favreau credits the role-playing game Dungeons & Dragons with giving him "...a really strong background in imagination, storytelling, understanding how to create tone and a sense of balance."