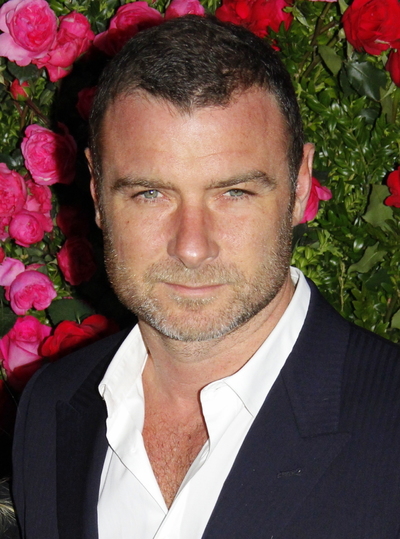 Isaac Liev Schreiber (born October 4, 1967) is an American actor, producer, director, and screenwriter. He became known during the late 1990s and early 2000s, having initially appeared in several independent films, and later mainstream Hollywood films, including the Scream trilogy of horror films, Phantoms, The Sum of All Fears, X-Men Origins: Wolverine, Salt and Goon. Schreiber is also a respected stage actor, having performed in several Broadway productions. In 2005, Schreiber won a Tony Award as Best Featured Actor for his performance in the play Glengarry Glen Ross. That year, Schreiber also made his debut as a film director and writer with Everything Is Illuminated, based on the novel of the same name.

Schreiber was born Isaac Liev Schreiber in San Francisco, California, the son of Heather (née Milgram) and Tell Schreiber, a stage actor and director. Schreiber's father, who is of Austrian, Swiss, Irish, and Scottish descent, was from a wealthy, Protestant, society family from Bucks County, Pennsylvania; he graduated from Hampshire College and was a wrestling and football star. Schreiber's mother, who now lives on an ashram in Virginia, was born into a Brooklynworking-class household of Jewish Communists, descended from immigrants from Poland,Ukraine, and Germany. With a firm knowledge of classical music and Russian literature, she has been described by Schreiber as a "far-out Socialist Labor Party hippie bohemian freak who hung out with William Burroughs."

When Schreiber was one year old, his family moved to Canada. According to Tell, at the beginning of their marriage, in San Francisco, Heather had a bad experience on LSD. Over the next four years, she was repeatedly admitted to hospitals and underwent therapy. After Tell threatened to admit her to a mental institution, she left. As Tell pursued his wife, Liev and his mother were trailed by private detectives in various states; when he was three, his father kidnapped him from an upstate New York commune to which Heather had decamped. By the time Liev was four, he was living with her on the fourth floor of a dilapidated walkup at First Avenue and First Street in New York City (his half brothers from her first marriage were with their father in a duplex on Central Park West), and he was the object of a fierce custody battle, which bankrupted his maternal grandfather, Alex Milgram. (Milgram was the significant male in Schreiber’s youth. He played the cello and owned Renoir etchings, and made his living by delivering meat to restaurants.)  When Schreiber was five, his parents divorced; his mother won custody, and the two moved to a cold-water flat on the Lower East Side in Manhattan, New York City, where he was raised. They frequently had no electricity, hot water, or even beds.

His mother was "a highly cultured eccentric" who supported them by splitting her time between driving a cab and creating papier-mâché puppets." On Schreiber's 16th birthday, his mother bought him a motorcycle, "to promote fearlessness." The critic John Lahr wrote in a 1999 New Yorker profile that, "To a large extent, Schreiber's professional shape-shifting and his uncanny instinct for isolating the frightened, frail, goofy parts of his characters are a result of being forced to adapt to his mother's eccentricities. It's both his grief and his gift." He endured her mood swings and bohemian proclivities (she made him take Hindu names, wear yoga shirts, and he was forced, briefly, to go to an Ashram school in Connecticut when he was 12). Schreiber's mother also forbade Schreiber from seeing color movies. As a result, his favorite actor was Charlie Chaplin. In the late 70s and early 80s Schreiber, known then as Shiva Das, lived at the Satchidananda Ashram, Yogaville East, in Pomfret, Connecticut. He also abided by his mother's vegetarian diet. In retrospect, Schreiber said in a 2008 interview, he appreciates his mother's influences, saying, "Since I've had Sasha, I've completely identified with everything my mother went through raising me...And I think her choices were inspired."

Schreiber went on to Hampshire College in Amherst, Massachusetts where he began his acting training at the University of Massachusetts Amherst, via the Five Colleges consortium. In March 1989 Liev played Antonio in the Merchant of Venice alongside Jeffrey Donovan. Liev graduated with a master's degree from the Yale School of Drama in 1992, where he starred in Charles Evered's The Size of the World, directed by Walton Jones. At Yale, Liev studied with Earle R. Gister. He also attended the Royal Academy of Dramatic Art in London. He originally wanted to be a screenwriter, but was steered toward acting instead.

Schreiber had several supporting roles in various independent films until his big break, as the accused murderer Cotton Weary in the Scream trilogy of horror films. Though the success of the Scream trilogy would lead Schreiber to roles in several big-budget studio pictures, Entertainment Weekly wrote in 2007 that "Schreiber is [still] best known for such indie gems as Walking and Talking, The Daytrippers, and Big Night."