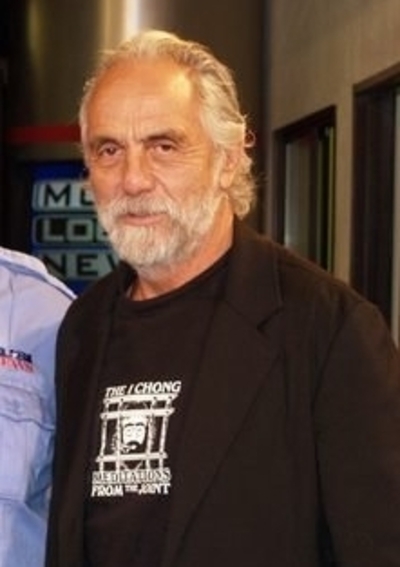 Thomas B. Kin "Tommy" Chong (born May 24, 1938) is a Canadian-American comedian, actor, writer, director, activist, and musician. He is well known for his marijuana-themed Cheech & Chong comedy movies with Cheech Marin, as well as playing the character Leo on Fox's That '70s Show.

Chong was born as Thomas B. Kin Chong at University Hospital in Edmonton, Alberta. His mother was Lorna Jean (née Gilchrist), a waitress of Scots-Irish and French ancestry,[4]and his father was Stanley Chong, a Chinese truck driver who emigrated to Canada from China in the 1920s, where he first lived with his aunt in Vancouver. While he was still young, Chong's family moved to Calgary, Alberta to a conservative neighbourhood Chong refers to as the Dog Patch. He says that his father had "been wounded in World War II, and there was a veterans' hospital in Calgary. He bought a five-hundred dollar house in Dog Patch, and raised his family on fifty dollars a week." He later dropped out of Crescent Heights High School in Calgary, Alberta. “I dropped out of Crescent Heights High School when I was 16 but probably just before they were going to throw me out anyway,” Chong laughs as he reminisces about his early years. “I played guitar to make money. I was about 16 when I discovered that music could get you laid, even if you were a scrawny, long-haired, geeky-looking guy like me.”

Cheech & Chong, while a very successful comedy act, experienced creative differences and split in 1985. This was devastating to Chong. To him, Cheech Marin was "closer than a wife. The only thing we didn't do was have sex." Of their split, he says, "It was like a death in the family. I don't know if I'll ever get over it". Chong was a recurring character and later a regular character as the hippie "Leo" (similar to his Chong character) during the second, third, fourth, seventh, and eighth seasons of That '70s Show. He also played a role as a hippie in Dharma and Greg. In a 2001 episode of That '70s Show, "Canadian Road Trip", Chong gave tribute to his home country by joining in a spirited rendition of O Canada along with the teenage cast and two Canadian border patrol guards (Joe Flaherty and Dave Thomas).

Chong first married Maxine Sneed, from 1960 until their divorce in 1970. They had two daughters, Robbi and Rae Dawn. His second marriage was to Shelby Fiddis in 1975. They had three children, sons Paris and Gilbran, and daughter, Precious Chong. He is also the adoptive father of actor Marcus Chong. Robbi, Rae Dawn, Marcus and Precious have pursued careers in acting. In the late 1980s, Chong became a naturalized citizen of the United States. Rae Dawn Chong is also a naturalized U.S. citizen.