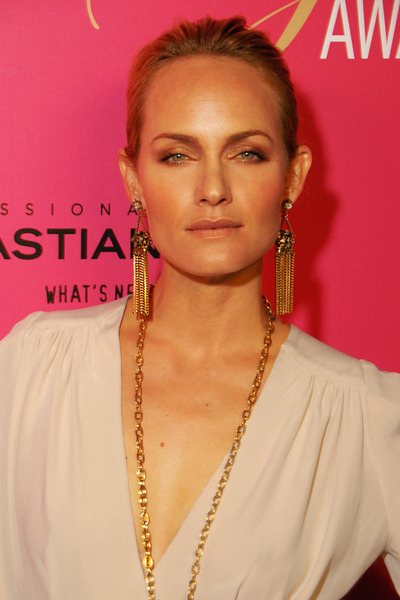 Amber Evangeline Valletta (born February 9, 1974) is an American actress and model. She began her career as a model for fashion agencies, and appeared on cover pages of internationally recognized magazines. She made her film debut in Drop Back Ten (2000). She then starred in the hit film Hitch (2005). She has since appeared in films such as Man About Town (2006), Dead Silence (2007), Gamer (2009), and The Spy Next Door (2010). She's also known for her role as Lydia Davis on the ABC television drama series Revenge.

Valletta was born in Phoenix, Arizona and raised in Tulsa, Oklahoma. Her mother worked at the post office. She attended Booker T. Washington High School. She got her start in the fashion industry when her mother enrolled her in modeling school at the age of fifteen at the Linda Layman Agency. She appeared on the cover of magazines and in advertisements for Louis Vuitton, Calvin Klein and Versace and hosted MTV's House of Style with fellow model and friend Shalom Harlow.

She was presented on the November 1999 Millennium cover of American Vogue as one of the "Modern Muses". Valletta's first role was in the comedy film Drop Back Ten (2000); Later that year, she played a supporting role in the thriller film What Lies Beneath. The film was directed by Robert Zemeckis and starring Harrison Ford and Michelle Pfeiffer. She appeared alongside Nicolas Cage in The Family Man. In 2003, she played as Celine in Danny DeVito's Duplex, starring Ben Stiller and Drew Barrymore, she also played as Meline in Raising Helen (2004), opposite Kate Hudson, Hayden Panettiere, Abigail Breslin, and Helen Mirren.

Valletta's major role was as Allegra Cole in Andy Tennant's Hitch (2005), for which she gained more attention. The film was released on February 11, 2005 and was a box office and critical success. She also had a role in Transporter 2, playing the mother of the kidnapped kid.

Valletta is married to Olympic volleyball player Chip McCaw with whom she has a son, Auden (b. 2000).