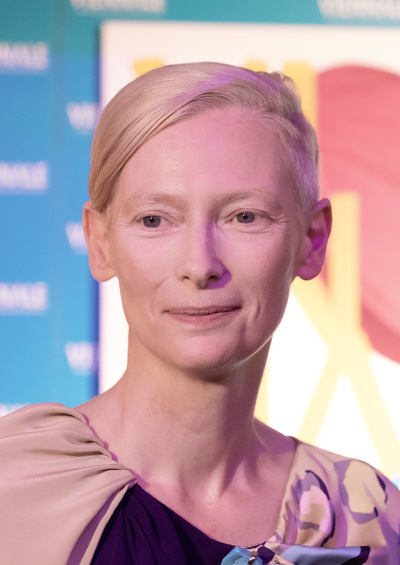 Katherine Matilda Swinton (born 5 November 1960) is a British actress. Known for her roles in independent films and blockbusters, she has received various accolades, including an Academy Award, a BAFTA Award and an Independent Spirit Award. She has also been nominated for three Golden Globe Awards and five Screen Actors Guild Awards. In 2020, The New York Times ranked her as one of the greatest actors of the 21st century.

Swinton began her career by appearing in the experimental films Caravaggio (1986), The Last of England (1988), War Requiem (1989), and The Garden (1990). Swinton won the Volpi Cup for Best Actress at the Venice Film Festival for her portrayal of Isabella of France in Edward II (1991). She next starred in Sally Potter's Orlando (1992), for which she was nominated for the European Film Award for Best Actress. She was nominated for a Golden Globe Award for her performance in The Deep End (2001). That followed with appearances in Vanilla Sky (2001) and Adaptation (2002). For the film Young Adam (2003), Swinton won the British Academy Scotland Award for Best Actress.

Swinton's performance in Michael Clayton (2007) won her the Academy Award for Best Supporting Actress and the BAFTA Award for Best Actress in a Supporting Role. Prior to this, she appeared in the film Constantine (2005), and subsequently had roles in Julia (2008) and I Am Love (2009). She gained acclaim for her performance in Lynne Ramsay's psychological thriller We Need to Talk About Kevin (2011) for which she received a nomination for the BAFTA Award for Best Actress in a Leading Role. Swinton gained wider recognition for her portrayals as the White Witch in The Chronicles of Narnia series (2005–2010) and the Ancient One in the Marvel Cinematic Universe franchise. She is also known for her performances in the Wes Anderson films Moonrise Kingdom (2012), The Grand Budapest Hotel (2014) and The French Dispatch (2021).

Swinton was awarded the Richard Harris Award by the British Independent Film Awards in recognition of her contributions to the British film industry. In 2013, she was given a special tribute by the Museum of Modern Art. In 2020, Swinton was awarded the British Film Institute Fellowship for her "daringly eclectic and striking talents as a performer and filmmaker and recognises her great contribution to film culture, independent film exhibition and philanthropy."