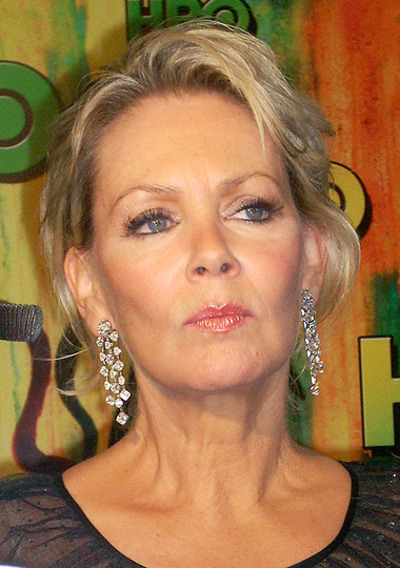 Jean E. Smart (born September 13, 1951) is an American film, television, and stage actress. She is known for her comedic roles, one of the best known being her role as Charlene Frazier Stillfield on the CBS sitcom Designing Women. She later gained critical acclaim for dramatic work, with her portrayal of Martha Logan on 24. Smart recently appeared as Regina Newly on the ABC sitcom Samantha Who? from 2007 to 2009, which garnered the actress an Emmy Award in 2008. She played Governor Pat Jameson during the first season of the CBS-TV remake of Hawaii Five-0.

Smart was born in Seattle, Washington, the daughter of Kay and Douglas Smart, a teacher. The second of four children, she was diagnosed with type 1 diabetes when she was thirteen. She is a 1969 graduate of Ballard High School, located in Seattle; it was there that she gained an interest in acting in the drama program. She graduated from the University of Washington Professional Actors Training Program with a BFA. Smart is a member of the University of Washington chapter of the Alpha Delta Pi sorority.

After graduating from college, Smart began her career appearing in regional theater while still living in Seattle (Seattle Repertory Theater, Ashland (Oregon) Shakespeare festival, etc.). She moved to NYC in the mid 1970s with college friend and fellow actress, Elizabeth Wingate (Lavery), and began working in Off-Broadway productions almost immediately. Before long she made her Broadway debut portraying Marlene Dietrich in the 1981 play Piaf, a role which she would later reprise for the 1984 television version. Also in 1981, Smart was nominated for a Drama Desk Award for her performance in the Off-Broadway play Last Summer at Bluefish Cove.

She began working in television in several smaller to mid-size guest parts in the late 1970s and early 1980s, appearing in such shows as The Facts of Life, Alice, and Remington Steele among several others. Her big break came when she was cast in the starring role of Charlene Frazier Stillfield on the comedy series Designing Women from 1986 to 1991.

In 2000, Smart's career took a turn for the better when she landed the role of Lorna Lynley (later renamed Lana Gardner) on the hit show Frasier. She went on to win two Emmy Awards for Outstanding Guest Actress in a Comedy Series.

Smart is married to actor Richard Gilliland, whom she met while working on the set of Designing Women (he played J.D. Shackelford, the boyfriend of Annie Potts' character, Mary Jo Shively). They have a son, Connor Douglas (born 1989) and a daughter, Bonnie Kathleen (adopted as a baby from China in May 2009). Gilliland played Captain Stan Cotter on 24 while Smart later played First Lady Martha Logan on the same series.