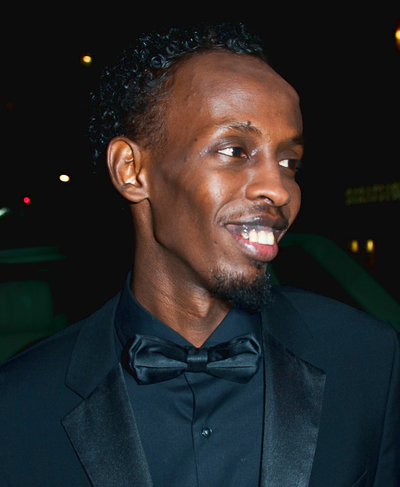 Barkhad Abdi (born April 10, 1985) is a Somali-American actor and director. He made his debut in the film Captain Phillips (2013), for which he received various film award nominations, including an Academy Award nomination for Best Supporting Actor.

Abdi was born in Mogadishu, Banaadir. Around the age of six or seven, when the Somali Civil War broke out, he and his family moved to Yemen to join his father, who had taken up teaching. In 1999, Abdi and his family relocated to Minneapolis, Minnesota, where there is a large Somali community. He subsequently attended Minnesota State University Moorhead. Before entering the film industry, Abdi sold mobile phones at his brother's shop at a mall in Minneapolis. He also worked as a limousine driver at a relative's chauffeur company and as a DJ.

Abdi made his debut in the 2013 film Captain Phillips. He played ship hijacker and pirate leader Abduwali Muse. He was cast following a worldwide search for the lead roles. Abdi and three other actors were subsequently chosen from more than 700 participants at a 2011 casting call in Minneapolis. According to the casting director, the four were selected because they were "the chosen ones, that anointed group that stuck out".

In January 2014, Abdi read scripts for a television show. He landed a role in an episode of the series Hawaii Five-0, playing former warlord Roko Makoni. Later that year, he began work on the comedy film Trainwreck, though he did not appear in the finished film. He also appeared in the 2015 thriller Eye in the Sky, playing Jama Farah; and appeared in The Brothers Grimsby.

In October 2017, Abdi will star in Denis Villeneuve's Blade Runner 2049, in the role of a deformed scientist.