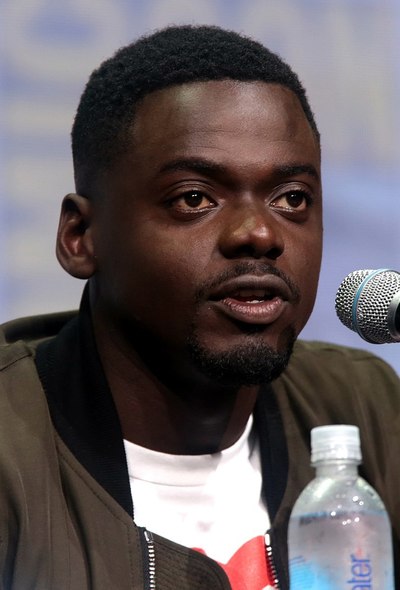 Daniel Kaluuya (born 24 February 1989) is an English actor and writer. He achieved international recognition for his performance in the critically acclaimed horror film Get Out (2017), for which he earned numerous accolades, including nominations for the Academy Award, BAFTA Award, SAG Award, and Golden Globe Award for Best Actor. That same year, he also received a nomination for the BAFTA Rising Star Award.

Kaluuya began his career as a teenager in improvisational theatre. He subsequently appeared in the first two seasons of the British television series Skins, some of which he also co-wrote. Playing the lead role in Sucker Punch at the Royal Court Theatre in London, Kaluuya won rave reviews for his performance and he won both the Evening Standard Award and Critics' Circle Theatre Award for Outstanding Newcomer.

He gained further acclaim for his performance in the Black Mirror episode "Fifteen Million Merits", and played Tealeaf in the BBC dark comedy series Psychoville, and Mac in the BBC Three horror drama The Fades. Kaluuya appeared as Agent Tucker in the 2011 film Johnny English Reborn, and, in 2013, he appeared in the film Kick-Ass 2. In 2015, he played a supporting role in the Denis Villeneuve film Sicario. In 2018, he portrayed W'Kabi in the Marvel Studios blockbuster film Black Panther.

Kaluuya was born in London, the son of Ugandan immigrants. He was raised by his mother on a council estate, along with an older sister; his father lived in Uganda, and rarely visited. Kaluuya attended St Aloysius College, London. He lives in West London with his girlfriend, Amandla.

Kaluuya wrote his first play at the age of nine, after which he began performing improvisational theatre. He admitted in an interview that he didn’t go to acting school as he could not afford it. His early roles included Reece in the BBC's controversial drama Shoot the Messenger. Kaluuya then joined the original cast of Skins as Posh Kenneth; he was also a contributing writer on the first two seasons of the series, as well as the head writer of the episodes titled "Jal" and "Thomas".

After Skins, Kaluuya appeared as a guest star in many popular television series such as Silent Witness, the Doctor Who special "Planet of the Dead", and Lewis. He has also appeared in the sketch show That Mitchell and Webb Look twice and the sketch show Harry and Paul. Kaluuya also voiced a character in the BBC Radio 4 sitcom Sneakiepeeks. In 2009, he became a regular cast member in the ITV comedy FM. At the end of 2009, the Screen International Magazine picked Kaluuya out in their annual report as a UK Star of Tomorrow.

In 2010, Kaluuya played the lead role in Roy Williams' Sucker Punch at the Royal Court Theatre in London; Kaluuya won rave reviews for his performance and he won both the Evening Standard Award and Critics' Circle Theatre Award for Outstanding Newcomer. From 2009 to 2011, he portrayed Michael "Tea Leaf" Fry in dark BBC comedy Psychoville.

In 2011, he appeared in the sequel of the 2003 film Johnny English, titled Johnny English Reborn, as Agent Tucker. Also in 2011, he played the role of Mac Armstrong in BBC3's supernatural drama series The Fades. In 2013, he appeared in the superhero comedy film Kick Ass 2. In 2015, he portrayed an FBI Agent in Denis Villeneuve's thriller film Sicario.

2017–present: Further success and breakthrough with Get Out

Kaluuya played one of the lead characters in "Fifteen Million Merits", an episode of the anthology series Black Mirror, for which he received positive reviews from critics. The episode originally premiered on Channel 4 in 2011, but gained popularity after it was subsequently released on Netflix in the United States. It was his performance in Black Mirror that attracted the attention of Jordan Peele, who later cast him in Get Out, which proved to be his breakthrough role.

Kaluuya's performance in Get Out, which was released in cinemas on 24 February 2017, attracted significant critical acclaim. Steven Gaydos of Variety wrote that “the terror, tension, humor, and fury of this powerfully effective cinematic balancing act all rests on the shoulders of this brilliant young British actor who communicates universal anxieties without ever losing the essential home address of his beleaguered African-American hero." Richard Lawson of Vanity Fair called Kaluuya's performance a "masterful, telling piece of acting." For his performance, he received numerous accolades, including an Academy Award nomination for Best Actor. He also received nominations for a BAFTA Award, a Golden Globe, a SAG Award, and a Critics' Choice Award for his role. He has also been nominated for the BAFTA Rising Star Award.

In December 2016, Kaluuya was cast in the Marvel Studios movie Black Panther. The film premiered January 29, 2018, in Los Angeles.