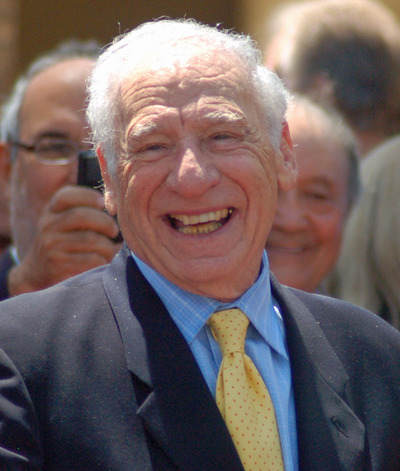 Mel Brooks (born Melvin James Kaminsky; June 28, 1926) is an American film director, screenwriter, composer, lyricist, comedian, actor and producer. He is best known as a creator of broad film farces and comic parodies. He began his career as a stand-up comic and as a writer for the early TV variety show Your Show of Shows. He became well known as part of the comedy duo with Carl Reiner, The 2000 Year Old Man. In middle age he became one of the most successful film directors of the 1970s, with many of his films being among the top ten money makers of the year that they were released. His most well known films include The Producers, The Twelve Chairs, Blazing Saddles, Young Frankenstein, Silent Movie, High Anxiety, History of the World, Part I, Spaceballs and Robin Hood: Men in Tights. More recently he has had a smash hit on Broadway with the musical adaptation of his first film, The Producers. He was married to the actress Anne Bancroft from 1964 until her death in 2005.

Brooks is a member of the short list of entertainers with the distinction of having won an Emmy, a Grammy, an Oscar and a Tony award. He received the 41st AFI Life Achievement Award in June 2013. Three of his films ranked in the American Film Institute's list of the top 100 comedy films of all-time, all of which ranked in the top 20 of the list: Blazing Saddles at number 6, The Producers at number 11, and Young Frankenstein at number 13.

Brooks was born Melvin James Kaminsky inBrooklyn, New York, a son of James Kaminsky and his wife Kate (née Brookman). His father's family were German Jews from the Baltic Sea port of Danzig (modern Gdansk, Poland); his mother's family were Ukrainian Jews from Kiev. He had three older brothers, Irving, Lenny, and Bernie. His father died of kidney disease at 34 when Brooks was two years old. Brooks has said of his father's death, that "there's an outrage there. I may be angry at God, or at the world, for that. And I'm sure a lot of my comedy is based on anger and hostility. Growing up in Williamsburg, I learned to clothe it in comedy to spare myself problems—like a punch in the face. "

Brooks was a small, sickly boy who was often bullied and picked on by his classmates. He was taught by Buddy Rich (who had also grown up in Williamsburg) how to play the drums and started earning money at it when he was fourteen. After attending Abraham Lincoln High School for a year, Brooks graduated from Eastern District High School and then spent a year at Brooklyn College as a psychology major before being drafted into the army. He attended the Army Specialized Training Program conducted at the Virginia Military Institute (although not actually as a VMI cadet), and served in the United States Army as a corporal in the 1104 Engineer Combat Battalion, 78th Infantry Division defusing land mines during World War II.

After World War II, Brooks started working in various Borscht Belt resorts and nightclubs in the Catskill Mountains as a drummer and pianist. Around this time he changed his professional name to "Mel Brooks" (Brooks is from his mother's maiden name Brookman) after being confused with the well-known Borscht Belt trumpet player Max Kaminsky. After a regular comic at one of the nightclubs was too sick to perform one night, Brooks started working as a stand-up comic, telling jokes and doing movie-star impressions. He also began acting in summer stock in Red Bank, New Jersey and did some radio work. He eventually worked his way up to the comically aggressive job of Tummler (master entertainer) at Grossinger's, one of the Borscht Belt's most famous resorts.

Brooks found more rewarding work behind the scenes, becoming a comedy writer for television. In 1949 his friend Sid Caesar hired Brooks to write jokes for the NBC series The Admiral Broadway Revue, paying him $50 a week. In 1950, Caesar created the revolutionary variety comedy series Your Show of Shows and hired Brooks as a writer along with Carl Reiner, Neil Simon, Danny Simon, and head writer Mel Tolkin. The show was an immediate hit and has been influential to all variety and sketch-comedy TV shows since. Carl Reiner, as creator of The Dick Van Dyke Show, based Morey Amsterdam's character Buddy Sorell on Brooks. Likewise the 1982 film My Favorite Year is loosely based on Brooks's experiences as a writer on the show and an encounter with aging Hollywood actor Errol Flynn. Neil Simon's 1993 play Laughter on the 23rd Floor is also loosely based on the production of the show, and the character Ira Stone is based on Brooks.

Your Show of Shows would end in 1954 when performer Imogene Coca left to host her own show. Caesar then created Caesar's Hour with most of the same cast and writers (including Brooks and adding Larry Gelbart). Caesar's Hour ran from 1954 until 1957.

In 1957, Brooks wrote the book for his first Broadway musical Shinbone Alley.

In 1965, Brooks teamed up with comedy writer Buck Henry to create a comedic TV show about a bumbling James Bond inspired spy. Brooks explains, "I was sick of looking at all those nice sensible situation comedies. They were such distortions of life...I wanted to do a crazy, unreal comic-strip kind of thing about something besides a family. No one had ever done a show about an idiot before. I decided to be the first." The show that Brooks and Henry created was Get Smart, starring Don Adams as Maxwell Smart, Agent 86. This series ran from 1965 until 1970, although Brooks was not involved with its production after the pilot episode. Get Smart was highly rated for most of its production and won seven Emmy Awards, including Outstanding Comedy Series in 1968 and 1969.

For several years Brooks had been toying with a bizarre and unconventional idea about a musical comedy of Adolf Hitler. Brooks explored the idea as a novel and a play before finally writing a script. Eventually he was able to find two producers to fund the show, Joseph E. Levine and Sidney Glazier, and made his first feature film, The Producers, in 1968. The film starred Zero Mostel, Gene Wilder, Dick Shawn, Kenneth Mars, Christopher Hewett, Andréas Voutsinas and Lee Meredith with music by John Morris.

The Producers was so brazen in its satire that major studios would not touch it, nor would many exhibitors. Brooks finally found an independent distributor who released it as an art film, a specialized attraction. In 1968 Brooks received an Oscar for Best Original Screenplay for the film beating such writers as Stanley Kubrick and John Cassavetes. The Producers became a smash underground hit, first on the nationwide college circuit, then in revivals and on home video. Brooks later turned it into a musical, which became hugely successful on Broadway receiving an unprecedented twelve Tony awards.

With the moderate financial success of the film The Producers, Glazier financed Brooks's next film in 1970, The Twelve Chairs. Loosely based on a Russian 1928 novel The Twelve Chairsby Ilf and Petrov about greedy materialism in post-Revolutionary Russia, the film stars Ron Moody, Frank Langella and Dom DeLuise as three men individually searching for a fortune in diamonds hidden in a set of twelve antique chairs. Brooks himself makes a cameo appearance as an alcoholic ex-serf who "yearns for the regular beatings of yesteryear." The film was shot in Yugoslavia with a budget of $1.5 million. The film received poor reviews and was not financially successful.

Brooks then wrote an adaptation of Oliver Goldsmith's She Stoops to Conquer, but was unable to sell the idea to any studio and believed that his career was over. In 1972 Brooks met agent David Begelman who helped him set up a deal with Warner Brothers to hire Brooks (as well as Richard Pryor, Andrew Bergman, Norman Steinberg and Al Uger) as a script doctor for an unproduced script called Tex-X. Eventually Brooks was hired as director for what would become Blazing Saddles, his third film.

Blazing Saddles starred Cleavon Little, Gene Wilder, Harvey Korman, Slim Pickens, Madeline Kahn, Alex Karras and Brooks himself with cameos by Dom DeLuise and Count Basie. The film had music by Brooks and John Morris and received a modest budget of $2.6 million. This film is a satire on the Western film genre and references older films such as Destry Rides Again, High Noon, Once Upon a Time in the West and The Treasure of the Sierra Madre as well as a surreal scene towards the end of the film referencing the extravagant musicals of Busby Berkeley.

Upon its release, Blazing Saddles was the second highest grossing film, domestically, of 1974 earning $119.5 million worldwide. Despite mixed reviews, the film was a success with younger audiences. It was nominated for three Academy Awards: Best Actress in a Supporting Role for Madeline Kahn, Best Film Editing, and Best Music, Original Song. The film won the Writers Guild of America Award for "Best Comedy Written Directly for the Screen" and in 2006 it was deemed "culturally, historically or aesthetically significant" by the Library of Congress and was selected for preservation in the National Film Registry. Brooks has said that the film "has to do with love more than anything else. I mean when that black guy rides into that Old Western town and even a little old lady says 'Up yours nigger!', you know that his heart is broken. So it's really the story of that heart being mended."

Brooks is one of the few artists who have received an Oscar, Emmy, Tony, and Grammy. He was awarded his first Grammy for Best Spoken Comedy Album in 1999 for his recording of The 2000 Year Old Man in the Year 2000 with Carl Reiner. His two other Grammys came in 2002 for Best Musical Show Album for the soundtrack of The Producers and for Best Long Form Music Video for the DVD "Recording the Producers - A Musical Romp with Mel Brooks". He won his first of four Emmy awards in 1967 for Outstanding Writing Achievement in Variety for a Sid Caesar special and went on to win three consecutive Emmys in 1997, 1998, and 1999 for Outstanding Guest Actor in a Comedy Series for his role of Uncle Phil on Mad About You. He won his three Tony awards in 2001 for his work on the musical, The Producers for Best Musical, Best Original Musical Score, and Best Book of a Musical. Additionally, he won a Hugo Award and a Nebula Award for Young Frankenstein. In a 2005 poll to find The Comedian's Comedian, he was voted #50 of the top 50 comedy acts ever by fellow comedians and comedy insiders. Three of Brooks's films are on the American Film Institute's list of funniest American films: Blazing Saddles (#6), The Producers (#11), and Young Frankenstein (#13).

Brooks was married to Florence Baum from 1951 to 1961. Their marriage ended in divorce. Mel and Florence had three children, Stephanie, Nicky, and Eddie.

Brooks was married to the actress Anne Bancroft from 1964 until her death from uterine cancer on June 6, 2005. They met at a rehearsal for the Perry Como Variety Show in 1961 and married three years later, August 5, at the Manhattan Marriage Bureau. Their son, Max Brooks, was born in 1972. In 2010, Brooks credited Bancroft as being the guiding force behind his involvement in developing The Producers and Young Frankenstein for the musical theater, citing an early meeting as "From that day, until her death on June 5, 2005, we were glued together."