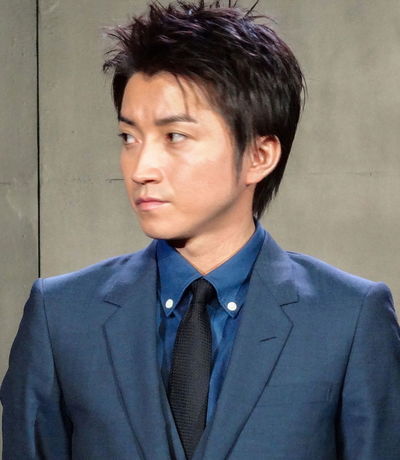 Tatsuya Fujiwara (born May 15, 1982) is a Japanese actor. Internationally, he is best known for his leading roles as Shuya Nanahara in the Battle Royale films, Light Yagami in the Death Note films, Kaiji Ito in the Kaiji films, and Rikuhiko Yuki in Hideo Nakata's The Incite Mill. In 2014, he portrayed the villain Shishio Makoto in the live action Rurouni Kenshin films.

Born in Saitama, Fujiwara has had an interest in acting from a young age. Since 2013, he is married with his long-term girlfriend and since summer 2016, they are parents. The name and sex of the child is unknown.

He is famous for acting the part of Shuya Nanahara in Kinji Fukasaku's controversial 2000 film Battle Royale. He continues the character as a leader of the Wild Seven in the sequel, Battle Royale II: Requiem.

He stars as Light Yagami, the leading role in Death Note and Death Note: The Last Name, films based on the manga of the same name. He also has a cameo appearance in L: Change the World, an L spin-off movie for the Death Note series. Fujiwara portrayed Death Note's main protagonist Light Yagami in the live-action movie. Fujiwara stated during filming that it was difficult to portray a character with such restrained emotions. During the filming of Death Note: The Last Name, Tatsuya became close friends with Kenichi Matsuyama, who plays L. Matsuyama mentioned that Tatsuya had done a good job.

In theatrical works, he is known for collaborating with Yukio Ninagawa, one of the most influential directors in Japan. He started his career in theatre, before screen debut, with the title role of Shintoku-maru, the boy who has an obsessive relationship with his step mother. He has also acted in Shakespeare plays, including Hamlet and Romeo and Juliet. Fujiwara played one of the lead roles in Hideo Nakata's psychological thriller film The Incite Mill. Fujiwara has also done voice dubbing for IRIS along with Meisa Kuroki, Yuu Shirota and his Death Note co-star Hikari Mitsushima when Fujiwara plays Kim Hyun-jun played by Lee Byung-hun

He portrayed the role of Shishio Makoto in the sequels of Rurouni Kenshin in 2014. From January to February 2015, he will appear in Hamlet directed by Yukio Ninagawa at Sai-no-Kuni Saitama Arts Theater in Saitama and at Umeda Arts Theater in Osaka for the first time in 12 years. After that, he is schduled to play the role in Taiwan in March and at Barbican Theatre in May 2015.