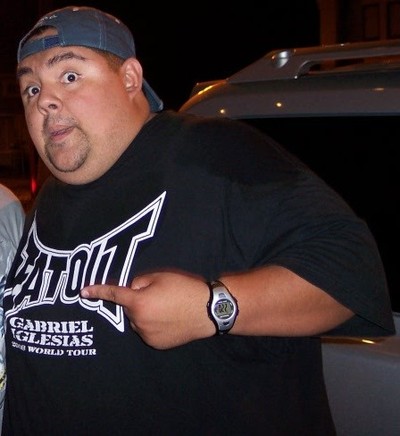 Gabriel J. Iglecias (born July 15, 1976), known professionally as Gabriel Iglesias and comically as Fluffy, is an American comedian, actor, writer, producer and voice actor. He is known for his shows I'm Not Fat… I'm Fluffy and Hot & Fluffy. He employs storytelling, affected voices and sound effects in his act, whose other trademarks include references to his weight and his use of Hawaiian shirts. He has been called a "comedy genius" by Hector Saldaña of the San Antonio Express-News.

Gabriel Iglesias was born Gabriel J. Iglecias in San Diego, California, the youngest of six children to a single mother. He is of Mexican heritage. His mother placed a letter "c" in his surname in retaliation for his father's absence during his birth, though he does not use this spelling in his everyday life, preferring to use the one with the "s". He grew up Riverside, Corona, Santa Ana, Baldwin Park, and Compton before settling in Section 8, low-income housing Long Beach, where Iglesias spent most of his youth.

Before going into comedy, Iglesias worked for a cell phone company in Los Angeles. Although his family urged him to remain in that job for its financial security, he insisted on trying his hand at comedy. When maintaining both occupations proved too difficult to handle, he decided in 1997 to take the risk of doing comedy full-time, against the advice of his mother, who cautioned him against such a move. Iglesias nonetheless left the phone company, which eventually resulted in his being evicted from his home and losing his car. Despite this, he persisted with comedy.

Iglesias often references his weight in his comedy, often saying, "Oh, I'm not fat, I'm fluffy", a term he says was popular among overweight people in the 1940s, which he decided to use in his act. He also references different "Levels of Fatness" in his act, having once described "Five Levels of Fatness", and eventually adding a sixth, called "Oh, Hell no!" in 2009. He also employs voices, sound effects and storytelling in his act, and his other trademark signatures include his Hawaiian shirts and a "nice-guy veneer".

In 2000, he appeared in season 6 of the Nickelodeon sketch comedy series All That, co-starring with Amanda Bynes and Nick Cannon.

In 2007, Iglesias voiced an entire Mexican family in "Padre de Familia", a sixth season episode of the Fox TV animated comedy Family Guy. That same year, he began voicing a recurring set of identical twin characters on The Emperor's New School, a Disney animated series that he describes as his favorite voice work.

Iglesias was a contestant on the fourth season of reality TV series Last Comic Standing in 2006, surviving elimination to become one of the final eight comics. He was disqualified at that point for having used a smuggled BlackBerry to communicate with family and friends, which violated the rules of the show.

In 2011, Comedy Central debuted Gabriel Iglesias Presents Stand Up Revolution, a standup showcase series which Iglesias produces and hosts. Hector Saldaña of the San Antonio Express-News praised Iglesias and the other comedian he assembled for the show, calling it "one of the all-time funniest comedy package tours" and Iglesias a "comedy genius".

Iglesias has currently hosted/co-hosted six episodes of Equals Three, more than any other guest.

Iglesias made a guest appearance on the YouTube show Epic Meal Time in the April 3, 2012 episode "Fast Food Fluffy Cake". Later that year he played a strip club DJ and drug dealer in the 2012 film Magic Mike.

Iglesias voiced Ned and Zed in the 2013 DisneyToon Studios film, Planes. In 2014 he voiced characters in the animated films, The Nut Job, and El Americano: The Movie.

Iglesias lives in Whittier, California. In The Fluffy Movie, Iglesias describes how at his heaviest, which he states was 445 pounds (202 kilograms), he was diagnosed with Type II Diabetes, and with his blood sugar spiking to over 300 regularly, was given two years to live by the doctor. He said the shock of being told he had two years to live prompted him to reevaluate how he took care of himself, stating he wanted to be there and take care of his family. Iglesias described the struggle to incorporate a healthier lifestyle, and was told by a specialist that because of his heavy touring schedule, bariatric surgery would not be a viable option for him. Iglesias said that he began incorporating a weight-lifting regimen and DDP Yoga, and his friends on the road kept him honest by making him stick to a high-protein diet, which helped him shed over 100 pounds (45 kilograms).