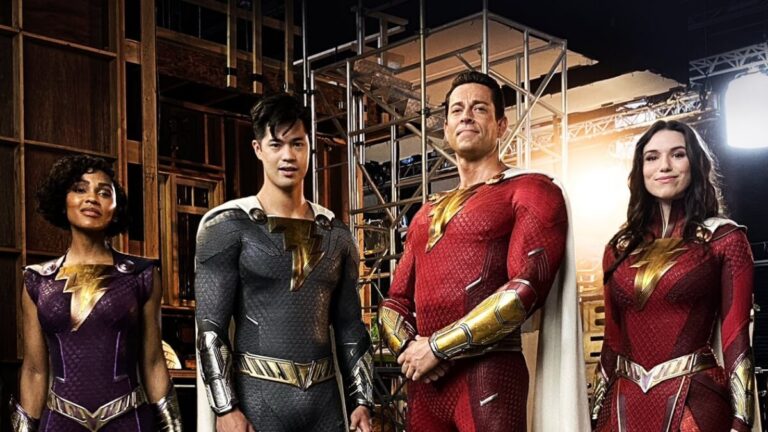 The Shazam Family is back with a new look!

Back in 2019, DC fans got a fun superhero flick in the form of Shazam!, introducing us to the live-action take on the young Billy Batson and his adult super alter-ego. At the end of the film, viewers were also able to meet the Shazam Family– Billy’s adoptive siblings who have also harnessed his power.

In a photo Tweeted by director David Sandberg, he has revealed the new costumes that the superhero family will be donning in the sequel, Shazam! Fury of The Gods. Check it out below:

Don’t know how long we can keep the new suits from leaking so here’s a pic I took the other day pic.twitter.com/41wStJ6oe2

Yes, Grace now plays both parts. But her hair and makeup is slightly different when she’s super so nobody will ever recognize her. Hey, it works for Wonder Woman! https://t.co/suaG3vaEZw

Shazam! follows the young boy Billy Batson who meets an aging wizard that grants him the power of Shazam. By shouting “Shazam,” Billy transforms into the adult superhero who has the powers of flight, inhuman strength, electricity, and more. In the end of the film, Billy was able to give his siblings similar powers turning them into the Shazam Family. While the sequel’s plot details are still under wraps, it is rumored that Lucy Liu and Helen Mirren will be playing the villains Kalypso and Hespera.

Also returning in Fury of the Gods are the young stars Asher Angel, Jack Dylan Grazer, Faithe Herman, Ian Chen, and Jovan Armand. The film is set for release in 2023.

You can watch the first Shazam! film on Netflix.

We've listed down for you some of the must-see panels at the second run of DC FanDome!
Share comment on My ClickTheCity Be the first to comment