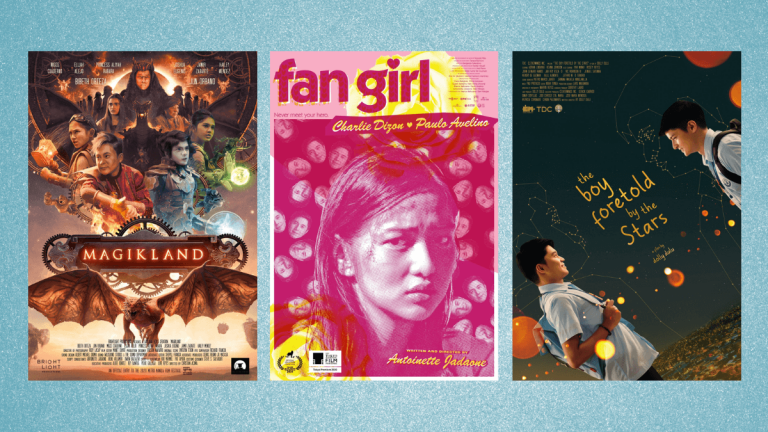 Here are the official entries of this year's online MMFF!

The movies coming to this year’s Metro Manila Film Festival has finally been revealed!

In its online media launch, MMFF unveiled its 2020 slate for the online iteration of the annual festival that will run from December 25 to January 7, 2021. While watching the MMFF films in cinemas with the whole family has been a longtime tradition, the much-awaited festival has been moved to the online platform Upstream this year due to the pandemic.

As a silver lining, not only will this allow for a safe and comfortable viewing at home, it will also make movie-watching this season more affordable. The whole family can enjoy each film for a single price. Now that’s a deal we don’t want to miss!

Here are the ten films that you need to catch in this year’s Metro Manila Film Festival online!

This fantasy action film is also produced by the late director Peque Gallaga, who is an icon in this genre. The film follows the four young top players of the Magikland mobile game who were gathered to save the fantastical world of Magikland.

This drama film follows a woman’s struggles to fix the broken ties of her family when she brings home her husband who had been absent in their lives for a long time.

A horror film from Regal Entertainment, The Missing follows Iris who is trying to start her life anew after the death of her sister. Commissioned to restore a house in Saga Prefecture in Japan, Iris and her colleagues uncover the house’s dark secret that would put their lives in danger.

Shot in Binondo, Hongkong and New York, this film from Ricky Lee’s script promises to give viewers a mature perspective on love. It tells the story of three people whose journeys are intertwined: Allen, a successful businessman; Tanya, a migrant who hustles around to make a living; and Agnes, Allen’s ex-wife who left to pursue the aspirations she wanted to fulfill.

A seaman comes home to his family who thought that he’d been dead for 20 years. With the help of his gay friend, he tries to woo his wife and his children who now hate him.

This film is based on the true story of the late Father Fernando Suarez. John Arcilla plays the titular role, giving us a glimpse of the man’s life, his miraculous healing, and even his conflicts with the other priests of the Catholic Church.

Vhong Navarro is back as Mang Kepweng in this sequel to the 2017 film Mang Kepweng Returns. When the engkanto Maximus Tolonges tries to conquer the human world using the powers of a magical black bandanna, it is up to Mang Kepweng and his friends to thwart the engkanto‘s evil plans.

This naughty comedy film follows the misadventures of four married guys who are still actively making moves on other women whenever their wives are not around.

Dominic believes that his soulmate is soon to come to his life after a fortune-teller gave him a reading. He then falls for Luke, a brokenhearted classmate he got close with during their retreat. But will their relationship turn into something more than just friends?

This film follows a sixteen-year-old fangirl who finds herself in an isolated place with the actor she’s obsessed with. But the more time she spends with him, the more she realizes that her fantasy might not be as flashy in reality.

The films at the Metro Manila Film Festival will be available for streaming at P250 each. Tickets will be sold at Globe’s GMovies while the films will be streamed via Upstream.