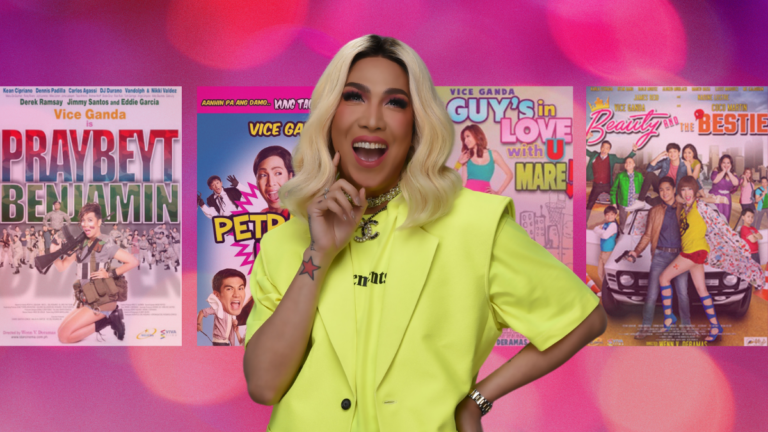 Want to dive into more Vice Ganda content to keep you entertained and laughing out loud? Here are 8 essential films from the unkabogable comedy queen to get you started!

Vice Ganda is an iconic star of MMFF film entries, the brainchild of a popular cosmetics brand, and now queen of a new online network. Vice is indeed a superstar who wears many bonggang-bonggang hats!

Vice Ganda’s brand of comedy and humor is one of the most-loved by Filipinos and this is why moviegoers flock to the cinemas for his films during the holidays. Anything starring the actor is bound to become a high-grossing film!

Want to dive into more Vice Ganda movies to keep you entertained and laughing out loud? Here are 8 essential films from the unkabogable comedy queen to get you started!

In his first lead role in a movie, Vice plays Peter, a poor young boy is adopted by a rich woman. He grows up to be bossy and generally cruel to the people around him. A mysterious stranger places a curse on him, turning him into a horse whenever he acts cruelly towards others.

This Vice Ganda movie was 2011’s highest grossing local film. Praybeyt Benjamin tells the story of Benjamin “Benjie” Santos VIII, a gay man born into a military family. When a civil war in the Philippines breaks out, he is forced to enlist in place of his ailing father.

This MMFF film entry stars Vice Ganda and Ai-Ai delas Alas as feuding half siblings. A down-on-her-luck socialite is hired by her successful half-brother to be his assistant. He resolves to torment her, but the two are forced to work together to overcome a powerful rival.

This movie is directed by Wenn V. Deramas and also stars Luis Manzano and Toni Gonzaga. Heartbroken that his longtime crush Mike is now attached to a woman, Lester (a gay man played by Vice Ganda) sets out to ruin that relationship by pretending to be straight and courting the affections of his love’s girlfriend.

ALSO READ:
Movie Review: ‘This Guy’s In Love With U, Mare’

If you can’t get enough of Vice, how about a film that features him playing four different roles? Quadruplets, separated as children and of four different sexual orientations, are reunited as adults through a case of mistaken identity.

This Vice Ganda movie is the highest grossing Filipino film of 2015, and also stars Coco Martin, James Reid, and Nadine Lustre. It’s about a secret agent that recruits his ex best friend to help in his mission to defend a beauty pageant contestant.

This 2018 MMFF entry is a fantasy comedy led by Vice Ganda as a proprietor of a struggling carnival named Perya Wurtzbach — the happiest place in the world (the universe, rather)! Their family is on the verge of being evicted, and seeks the help of magical creatures to keep their carnival from closing.

A 2019 MMFF entry produced by Star Cinema and Viva Films, the comedy film stars Vice Ganda and Anne Curtis as feuding siblings Moira and Morisette. While Vice and Anne are have worked together in television hosting It’s Showtime, this movie is their first big screen collaboration.