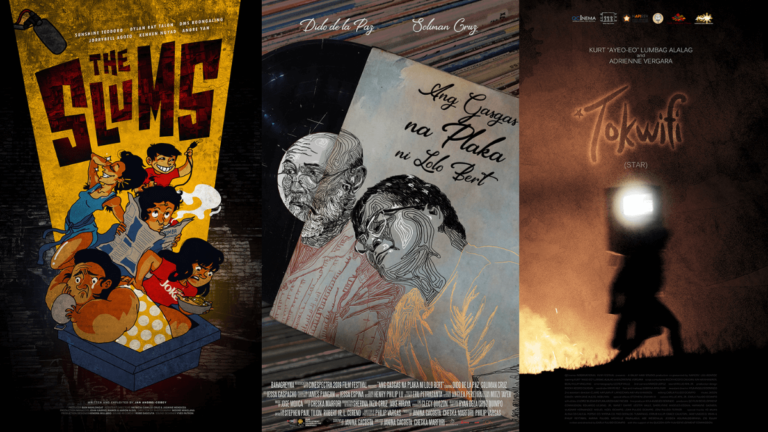 Heads up, film enthusiasts! We’ve got some good news.

Despite the ongoing pandemic, the Cinemalaya Philippine Independent Film Festival will continue its 16th run this year by moving to an online platform! Starting from August 7 to 16, viewers at home can be part of the festival by streaming the films (and more!) on Vimeo.

Also this year, the festival’s co-producers Cultural Center of the Philippines and the Cinemalaya Foundation Inc. have decided to put the short film category into the spotlight by making it this year’s main competition.

The screening of the 10 full-length films announced last year will be put on hold, and they will instead compete on next year’s festival with eight more competitors.

With the theme Stream Consciousness, below are the 10 finalists that stood out from a pool of 244 short film entries!

By Janina Gacosta and Cheska Marfori

After living with HIV for 10 years, the life of a closeted gay in his 60s takes an unexpected turn when he receives an old vinyl record from his dead ex-lover.

Ang Pagpakalma sa Unos or To Calm the Pig Inside, is a reflective film about a typhoon’s aftermath and how reality and fantasy are interwoven by those coping with the devastation and trauma.

Excuse Me Miss, Miss, Miss is a social satire centered on Vangie, a contractual sales lady who is about to lose her job; until she discovers the jaw-dropping secret to regularization.

Fatigued is an interactive film about an employee who overslept and must wake-up from a nightmare. It promises a unique experience especially if it is watched by a group of people.

Living Things follows the long-time lovers Kints and Charles. One day, Kints discovers an unexpected change on her partner, and gets reminded how people change, and how love can change people.

A film that focuses on religion and economy, Pabasa Kan Pasyon or Chanting The Passion follows a Bicolano family trying to make ends meet during the Lenten season through their faith.

In Quing Lalam Ning Aldo or Under The Sun, a transgender sampaguita farmer renovates their neglected kitchen upon hearing her son’s forthcoming return.

In The Slums, a documentary team enters the life of a poor family living in the slums, documenting the household’s attempts to cope with the loss of their TV.

Tokwifi is a Bontoc word meaning bituin or star. On the way to his home village, Limmayug discovers a 1950s television that fell from the sky. Trapped inside is the showbiz star Laura Blancaflor, who can somehow interact with him.

Utwas or Arise is about the young boy Toto, who discovers more about the ocean as he goes diving to catch fish with his father.

These 10 short films only make up the main competition. The whole Cinemalaya festival has a lot more in store for the viewers at home!

Aside from the finalists, Cinemalaya will also be screening over 20 specially-curated short films from the same pool of submitted entries. They will also be streaming documentaries, ‘Cinemalaya Retro’ films, the restored and remastered ‘Minsa’y Isang Gamu-Gamo‘, the Cinemalaya Campus 2019 winners, and the works of director Peque Gallaga and actress Anita Linda, as a tribute to their great contributions to the Philippine Film industry.

The CCP Gawad Alternatibo also continues its run this year to showcase animated films, documentaries, short features, experimental works, and the ‘Emergent Media Exhibition’ which will focus on the Filipino-made video games.

Cinemalaya will also be introducing Tara, chat!, an online version of the Talkback sessions where viewers can get to interact and ask questions to the directors and actors of the entries. Meanwhile, renowned screenwriter Ricky Lee will also conduct a scriptwriting masterclass, perfect for the passionate writers out there.

Posted by Cinemalaya on Thursday, August 6, 2020

Given the current situation, the winners of this year’s festival will also be announced online. Access on up to five films are priced P75 while full access to the Cinemalaya festival, including all films and other features, is priced P350. Get your tickets here.