‘Ad Astra’: An Epic Space Odyssey of the Human Soul

More than a mystery or an action thriller (which it is), ‘Ad Astra’ is a deep character study and a meditation on humanity.

Every journey in a good movie is always two-fold: the physical distance a character takes from point A to point B and the internal one that changes his being. It’s something I’m always looking at in every road trip or adventures with a journey plot; the correlation between the distance traveled and the changes happening inside the protagonist.

In ‘Ad Astra,’ director James Gray sends lead star Brad Pitt through outer space, into the stars (the English translation of the title) on a journey to reach out to his father, who may or may not be alive; and who may or may not be the cause of massive power surges that are wreaking havoc on the solar system. This is not some action-adventure as the trailer might lead you to believe. There are stunning moments of thrilling action in the atmosphere-less environment of the moon but that is just a tiny part of a larger film that is really a meditation on humanity, on solitude and connection, and our relationships with our parents.

Brad Pitt plays Major Roy McBride is a decorated astronaut with military service in the far future. This is a future where there are commercial flights to the moon and there are research labs in Mars. But powerful electrical surges have been wreaking havoc on Earth and Roy McBride has been asked to take a journey to Mars to send a direct message to Neptune to a space station long-thought gone. The McBride will try to contact is his father, the head of Project Lima in Neptune, whom he had long-thought dead.

Getting to Mars is no easy task. We discover the moon is a chaotic place rife with a territorial mining war and pirates and a trip to the red planet is no simple cruise, either. But more than just the challenges of the trip is the internal conflict brought alive by a stirring narration of McBride’s inner thoughts.

I’m not one to advocate for the use of narration. I’m not a big fan of it (though there are many films I like that utilizes it with great effect, most especially Terrence Malick of ‘Tree of Life’ and ‘Thin Red Line’) but the plot and central conflict of the narrative of ‘Ad Astra’ can only be fully realized using this cinematic device.

More than a mystery or an action thriller (which it is), ‘Ad Astra’ is a deep character study and a meditation on humanity. This incredible journey that Roy McBride takes over gorgeously photographed alien planets are merely frameworks to understand the far heights that mankind has accomplished in this cinematic reality. 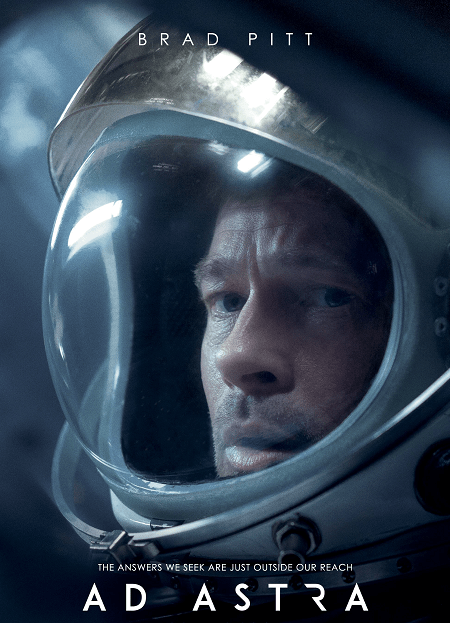 And in the center of it all is Roy McBride, with another stellar and magnificently understated performance by Brad Pitt, who plays a man who manages to keep his heart rate at a steady pace of 80 bpms no matter how tense the situation can be. He’s the epitome of a professional, who early on states that he has become an expert in compartmentalizing his life but this journey he takes across planets and far off into the edges of our solar system, he has to come to terms with the possibility that the father he never really knew might still be alive.

There is a casual, everyday treatment to space travel in ‘Ad Astra,’ which is important in the larger theme of the story. Unlike many other science fiction films that tend to hype up or glamorize the experience of it, the movie turns it ordinary the way ‘Gravity’ did or, more appropriately, ‘2001: A Space Odyssey.’ Its depiction of space travel is realistic and is only so cinematic because it’s so alien and so refreshing in its approach. It's romantic without being romanticizing it all. The visuals are always anchored down by the inner conflict of Roy McBride’s journey.

It is an odyssey, an epic journey that makes us believe that Roy holds the key to stopping the power surges and saves the universe but there’s an even bigger discovery that is yet to be made. One that puts everything within the film’s two-hour running time into proper perspective.

I’m in awe of this movie. Sitting in the cinema and watching it as it opens up a world of possibilities of space travel and other great achievements by man, but it also manages to refocus your perspective on something so necessary and essential. It is large in scope and vision but, at the same time, so wonderfully personal and intimate. This is definitely in the running as one of my favorite movies of the year, up there with ‘Parasite.’

Find showtimes for 'Ad Astra' and book your tickets today!