QCinema Report: ‘Beanpole’ and the Never Ending Battle for Peace

‘Beanpole’ is definitely a powerhouse and as the official entry of Russia to the Oscars, I’ve no doubt it has a big chance for a nomination for Best Foreign Film.

There is a stillness in the Russian film ‘Beanpole,’ a powerful sense of quiet underneath the incredible sound design and the magnificent production design that depicts Leningrad in 1945, just after World War II. This silence permeates through different scenes that just amplifies the breathtaking performances of Viktoria Miroshnichenko and Vasilisa Perelygina as two nurses serving at a hospital and are struggling to stay afloat as Russia is set to rebuild after the war.

Director Kantemir Balagov takes his time building his world and the psychology of our two lead characters. Miroshnichenko plays Iya, an extremely tall but kind-hearted nurse who suffers from moments when she zones out into space; a symptom of the post-traumatic stress disorder she obviously suffers.

And then there’s Perelygina’s Masha, a “military woman” who is back from the front (she says she had made it as far as Berlin), and aside from the on and off nose bleeds, there is a longing inside of her that was somehow put there by the ravages of war. While Masha has visible scars from the ordeal that she has faced, both women are broken inside. This is so powerfully exhibited through Perelygina and Miroshnichenko’s superb performances.

And with Balagov at the helm, he brings the camera extremely close, to the point where we see nothing in the large cinema screen except their two faces as they stare each other down, struggle with the horrors that live inside their minds. There is no place for either actress to hide away with the camera so up close and Balagov draws out the scene, utilizing silence and stillness to constantly flood us with waves of emotions. 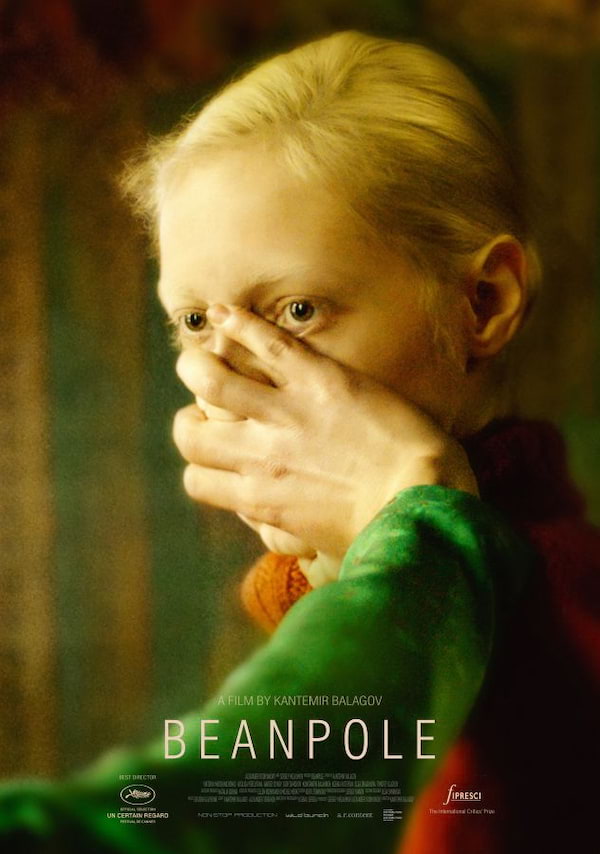 Leningrad was hit badly by the war, maybe even the worst for Russia, and you can see this in their daily lives — rationing of food, the broken posture and sullen faces of the people walking on the streets, the rubble scattered along the city — and while Iya and Masha are trying to survive, fill their time with work, deal with unlikely suitors, they must also deal with each other and the special bond that they share.

In the world of ‘Beanpole’, and how it must possibly be like for any survivor of war, the battle is never-ending. It’s peacetime but trauma remains. As nurses in a hospital, Iya and Masha are surrounded by people struggling to recover from their wounds, some temporary while others are permanent. This is a bleak world that we are seeing here. Yes, the war is over but the recovery is just as painful, if not worse.

But there is joy here as well; the film is not without its moments but it is the cliched Russian dour cynicism, for it comes with a price too. As hard a battle as Masha is prepared to wage for a chance to heal, this will have equal ramifications for Iya.

Again, this is a story that is heavy and filled with dark and heavy emotions. It is beautifully shot and wonderfully acted but it can take its toll. Its two hour and ten minute running time can seem longer than that because Balagov is not afraid to hold a moment in place to allow the audience to really absorb the range and depth of emotions within each scene. There are revelations that come out as the story unfolds that threaten to tear this friendship apart as well as their own individual selves.

‘Beanpole’ is an anti-war movie, if there ever was one. All it needed to do was show the after effects of such an occurrence for us to truly grasp the horrors of it and how, in Russia and in 1945, it was worse on women than it was on anybody else.

‘Beanpole’ is definitely a powerhouse and as the official entry of Russia to the Oscars, I’ve no doubt it has a big chance for a nomination for Best Foreign Film.