Tom Hardy reveals new side of himself in “The Drop”

"The Drop" sets an unusual love story against the volatile backdrop of organized crime’s unbreakable grip on the small pubs and taverns used as money-laundering “drops.”

The discovery of an abandoned and abused puppy leads a lonely bartender out of his constricted world in "The Drop," a riveting journey through a rarely seen side of working-class Brooklyn. The first film written by best-selling author Dennis Lehane, "The Drop" sets an unusual love story against the volatile backdrop of organized crime’s unbreakable grip on the small pubs and taverns used as money-laundering “drops.”

Bob Saginowski (Tom Hardy) slings drinks in his Cousin Marv’s (James Gandolfini in his final performance) bar and looks the other way whenever Brooklyn crime bosses use the place as a temporary bank for their ill-gotten gains. He keeps to himself, attending Mass daily at the old neighborhood parish church, but never taking Communion. 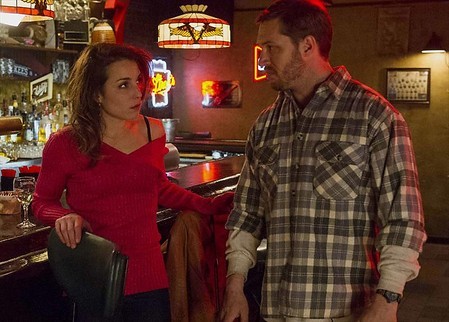 Bob’s simple life becomes much more complicated when he discovers a battered pit bull puppy in a trash can. Turning to his neighbor Nadia (Noomi Rapace) for help, he nurses the puppy back to health, as their mutual concern for the dog sparks an unexpected attraction between them. But when Eric Deeds (Matthias Schoenaerts), the dog’s original owner and Nadia’s abusive ex-boyfriend, tries to reclaim both of them, and a robbery at the bar puts Bob in the crosshairs of the Chechen crime boss who owns it, Bob is forced to face the shocking truth about the people he thinks he knows best—including himself.

To direct the movie, the producers selected Michaël R. Roskam, a Belgian with one feature film to his credit: "Bullhead," a dark thriller about a brooding and dangerous loner that was nominated for an Academy Award for Best Foreign Film in 2011. 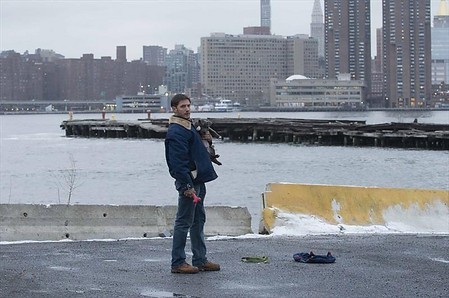 “It was such a strong debut for a director,” says executive producer Larocca. “The way he handled the cast made it really clear that this is a guy who knows how to work with actors. Our script has rich and deeply complex characters, so we needed someone we knew could work with actors to draw out truly extraordinary performances.”

The success of Roskam’s first feature was rapidly opening doors for the director in Hollywood, and he gave careful consideration to the choices he was offered. “This is the first time I have directed a film from a script I didn’t write,” Roskam says. “One of the things that drove my decision was that I wished I had written it. I knew it was the story for me. It was extremely well-written and plot-driven, but with the kind of complex character development that appeals to me.”

"The Drop" will open in cinemas soon from 20th Century Fox to be distributed by Warner Bros.