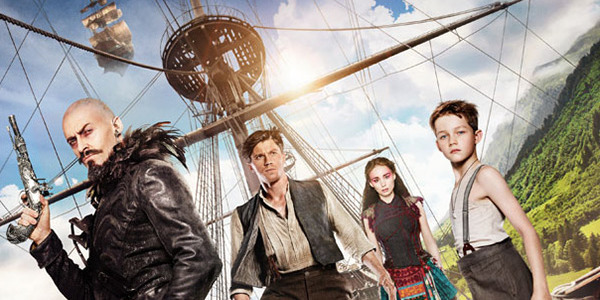 In Pan, Peter (Levi Miller) starts out as a twelve-year-old living in an orphanage in London during the Blitz. One night, he, along with a bunch of other orphans, are abducted by pirates and brought to magical Neverland to work for Blackbeard (Hugh Jackman) mining fairy dust. Soon enough, however, Peter learns that he has a greater destiny. It turns out that he can fly, and that he might play a part in a prophecy that involves a hero leading the natives and the fairy kingdom in a revolt against Blackbeard.

The one thing that defines the character of Peter Pan is that he is the boy that won’t grow up, his orphan nature preventing him from taking on the challenge of becoming an adult. And so it is strange to place the character in a story that calls on him to accept the very adult responsibility of leading people in a war for freedom against a tyrant. The film turns the impish but implicitly tragic Peter into another generic fantasy adventure hero, a reluctant messiah struggling with the binds of prophecy as he becomes the hero that he was always meant to be. The film does little to capture the spirit of the character and the story from which he sprang.

Prophecy is a tricky narrative device. It takes away the tension of the story, since the triumph is preordained. This is felt even harder in this film, because we already know who Peter is and who he becomes. The film invests in the drama of Peter doubting his place in the prophecy, unsure if he can really fly. This all feels pretty inane, because we already know that he’s Peter Pan. And when the prophecy does eventually pay off, the film doesn’t make Peter’s role feel vital. In fact, the big climax of this film completely contradicts the lengthy mythology that the film inflicts on JM Barrie’s story.

It’s tough to talk about without giving too much away, but the film doesn’t do a very good job of selling the necessity of Peter being in Neverland. The movie doesn’t even make much of a case for Blackbeard as a villain. When all is said and done, it doesn’t really make any sense that the combined might of the fairy kingdom and the natives once cowered before the pirate. The film as a whole just isn’t put together very well. It throws together random elements that don’t really fit. When Peter first arrives in Neverland, he is greeted by Blackbeard and his orphan miners singing Nirvana’s Smells Like Teen Spirit. Later, there is a rendition of Blitzkrieg Bop. Both are strange, anachronistic choices that can take the audience right out of the world they’ve been building.

The film just doesn’t earn the strangeness. At heart, it’s just molding this fascinating classic tale into a more generic form; one that gives Peter some closure, and makes the adventure the entire point. To the film’s credit, it does show off plenty of visual panache. And though the Peter in this film isn’t very interesting, Levi Miller proves to be a pretty compelling lead. Hugh Jackman, chews the scenery as Blackbeard, and that’s not actually a bad thing. I’m not sure what Garrett Hedlund is trying to do as Hook, but it isn’t quite working. And I’m still not sure why Rooney Mara is playing Tiger Lily.

Pan feels like a series of mistakes, a fundamental misinterpretation of JM Barrie’s classic character. At best, the film is a visual delight, a barrage of twisted imagery that brings Neverland to life. At worst, it is a generic adventure movie that loses much of the thematic weight that the beloved stories once contained. This isn’t the Peter Pan that children ought to get to know. This didn’t need to be Peter Pan at all.